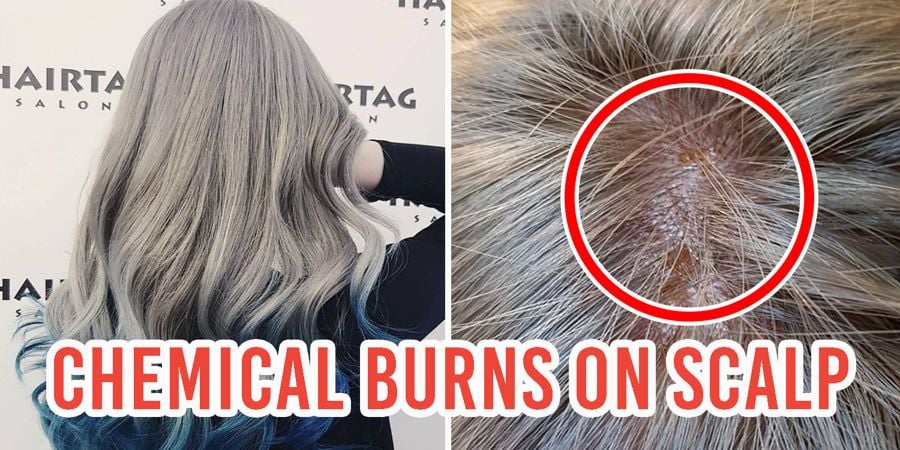 UPDATE (17 Jan): Hairtag Salon has since refunded Rachel $526 for the hair colouring services and the medical cost incurred. 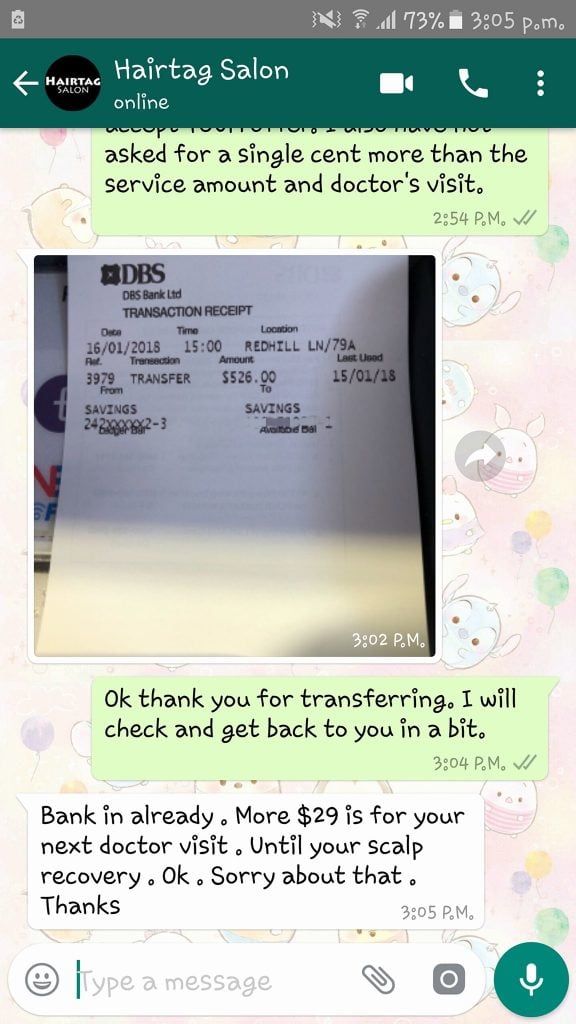 This includes $468 for the original cost of the treatment, $29 for medical fees, and an additional $29 for a future doctor visit.

The original report continues below.

Most of us walk out of a hair salon feeling fresh and fabulous after colouring our hair. But this was not the case for poor Ms Rachele Tan.

On Sunday (14 Jan), she detailed her fateful visit to Hairtag Salon & Make Up Studio — where she walked away with gorgeously bleached silver and blue hair, and chemical burns in her scalp.

Though bleaching to achieve desired base hair colours is usually a safe process, how this salon allegedly bleached Ms Tan’s hair will shock you.

Here’s her Facebook post in full. We examine her hair-raising accusations, as she seeks the threads of justice she deserves, after the jump. 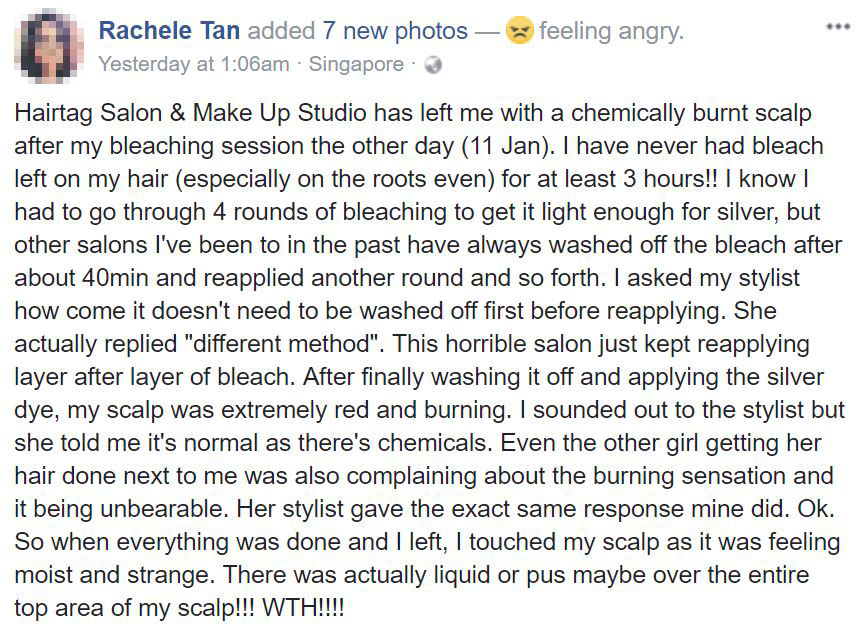 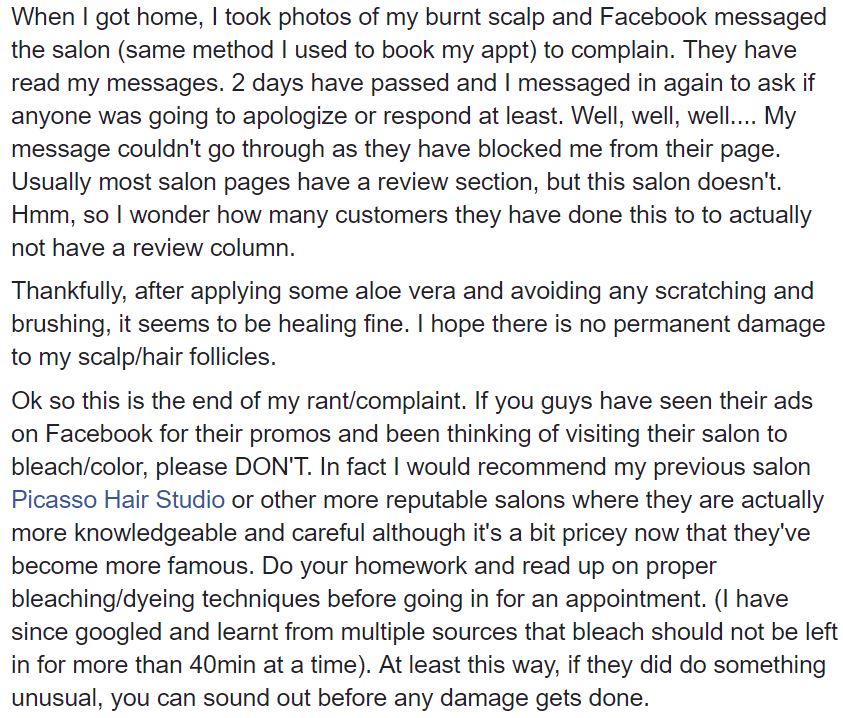 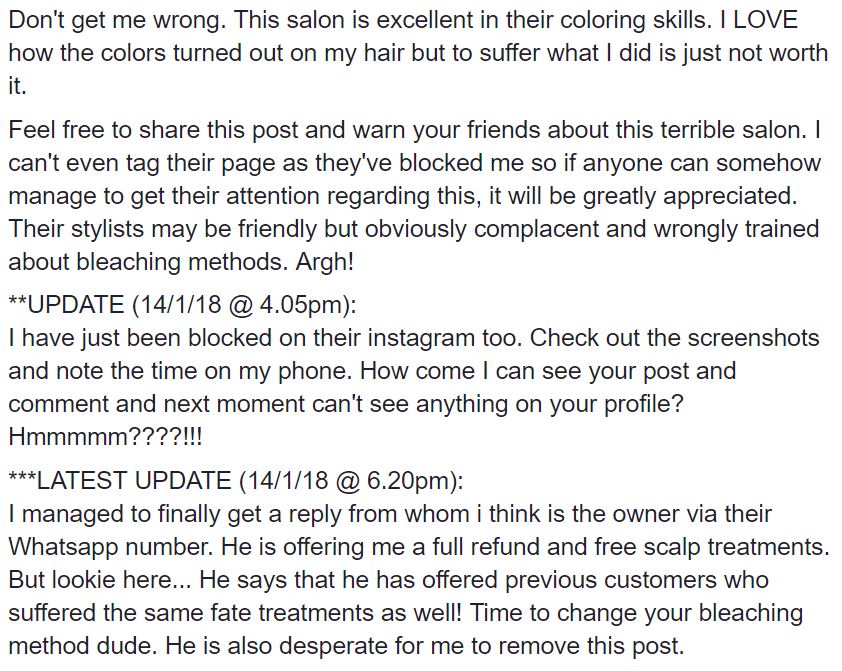 In her Facebook post, Rachele tells us that she was aware that it would require 4 rounds of bleaching to achieve the shade of silver that she desired.

But what she didn’t know, was exactly how they were planning to bleach her hair. 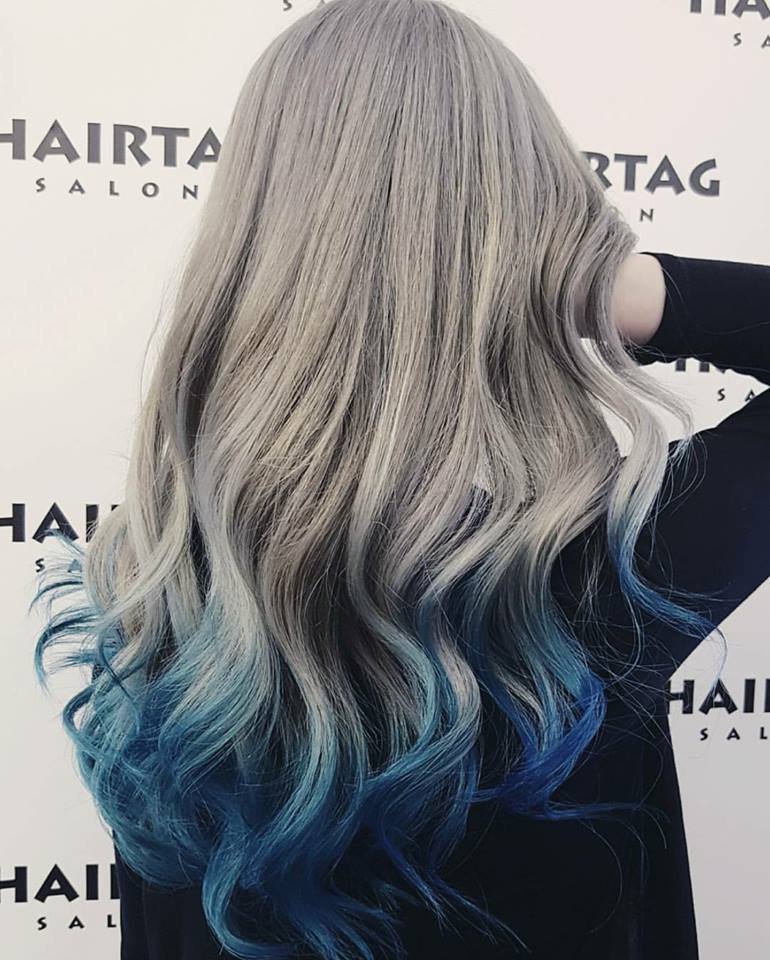 Her appointment was with a stylist called Albee, on Thursday (11 Jan) at 10.30am. She alleges that the salon left the bleach on her hair for at least three hours.

She said that she felt uneasy about this unorthodox process, as salons she frequented in the past had always carried out hair bleaching multiple times — by rinsing and applying a few rounds of bleach.

Reputable hair salons have also confirmed that bleach should not be left in the hair for more than 40 minutes at a time.

When she questioned the stylist on why there was no rinsing of the bleach applied, she simply replied, “different method”.

Undeterred by Ms Tan’s line of questioning, the stylist continued applying layer after layer of bleach.

After three torturous hours, the bleach was washed away and a silver dye was applied. After which, Ms Tan noticed that her scalp was burning and extremely red.

She brought it up to her stylists, but her concerns simply got brushed off. She was even told “it’s normal as there’s chemicals”.

We can’t help but question how a scalp that is “red and burning” is anything near ‘normal’.

According to Ms Tan, another female customer present also complained about the unbearable burning sensation.

But her stylist responded in exactly the same way. When the dye job was complete, her scalp felt “moist and strange”.

To her horror, Rachele then discovered that there was a pus-like liquid over the entire top area of her scalp. 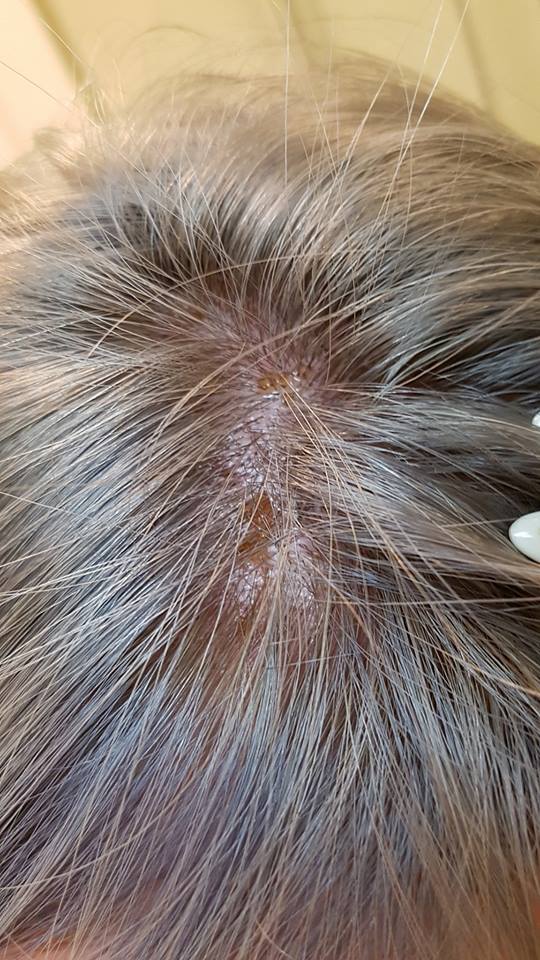 Upon arriving home, she sent photos of her chemically burnt scalp to the salon and lodged an informal complaint via Facebook Messenger.

They read her message but failed to reply. After two days, Rachele messaged them again, chasing them for a response. 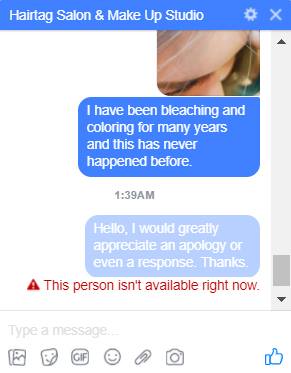 There was no reply again. Why?

Her message was not delivered because the salon had blocked her.

Rachele highlights in her post that salons typically have a review section on their Facebook page — but this salon was an exception. 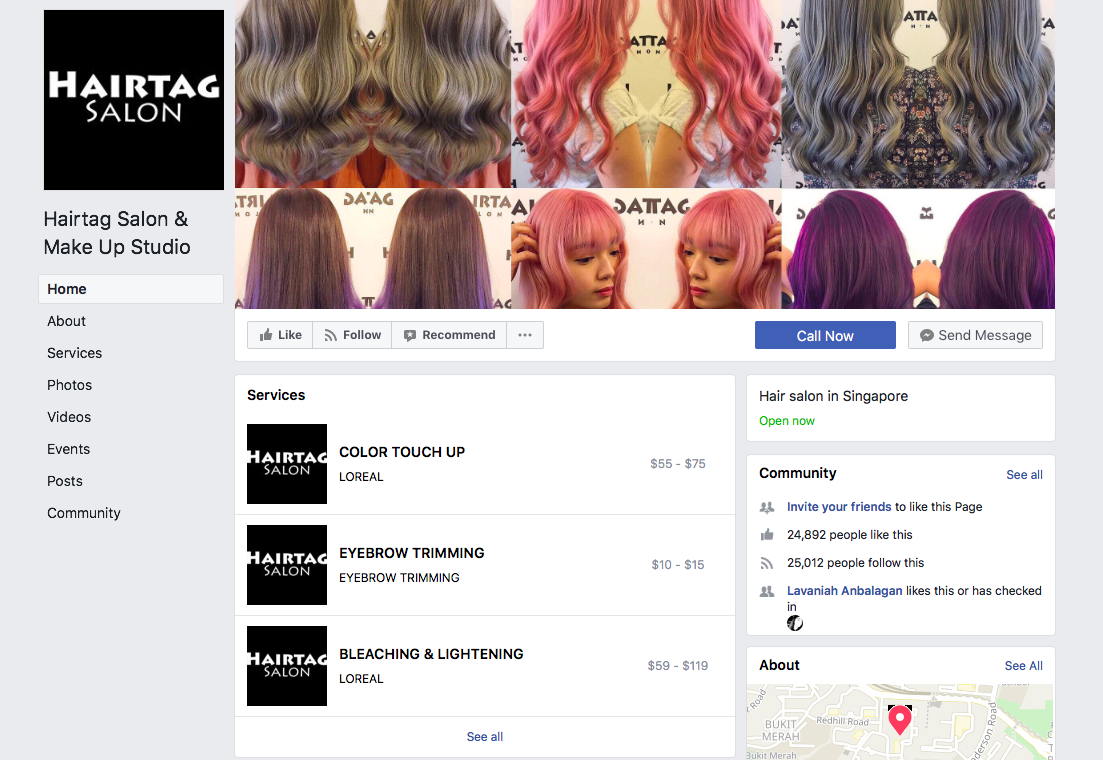 Rachele attempted to get their attention by leaving a negative comment on one of their posts. 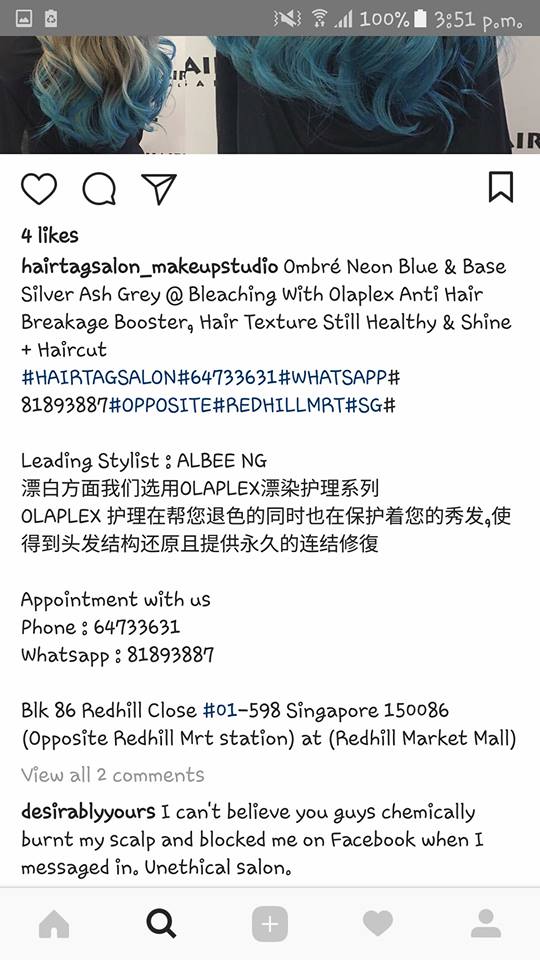 And lo and behold — she got blocked again. 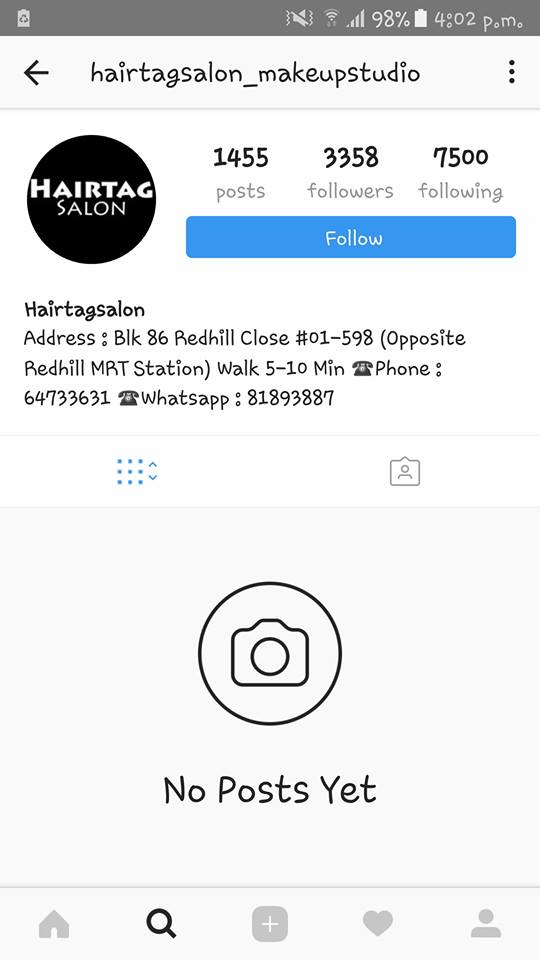 This salon must be very good at dodgeball, since they managed to evade their angry client so well.

Third time is a charm?

After trying to contact them twice but to no avail, she unexpectedly got a reply from the owner of the salon via WhatsApp.

He offered her a full refund and free scalp treatments until her scalp recovers fully.

Apparently this ‘compensation package’ had been offered to other clients in the past, who have suffered the same fate. 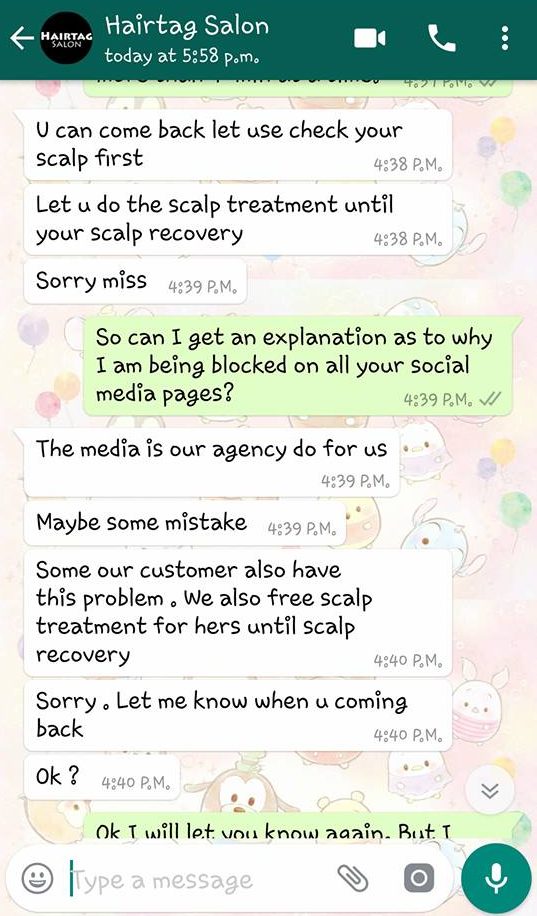 He also denied having anything directly to deal with Ms Tan getting blocked on Facebook, saying it was “our agency do for us”. MustShareNews spoke directly with Ms Tan on Monday (15 Jan) for the latest updates on her situation.

Is the salon actually sorry about Ms Tan’s situation? Or are they only sorry because they got called out for it?

Don’t be. Most salons do use safe methods of bleaching to get to the desired base colour. Here’s a pro-tip before you sit in that chair, ready to get your hair game on fleek:

Remember to ask your stylist how the hair colouring process is carried out. Never be afraid to question what they are doing, and let them know if you are uncomfortable with the process.

All things considered, we sincerely hope it all works out for Ms Tan and Hairtag Salon & Make Up Studio. Ms Tan did manage to achieve her desired silver blue ombre hair colour after all.

The only question remaining is, was the cost of beauty in this case simply too high a price to pay?

The case is ongoing and the Rachele will provide updates to MustShareNews as the event unfolds.

(15 Jan) Update: An instagram user by the name of Song Kellye has also spoken up about experiencing something similar when she visited the salon.

(16 Jan) Update: Rachele used WhatsApp to show the medical fees incurred on her visit to the doctors. The salon has promised her claim of medical fees, and followed up on that promise. 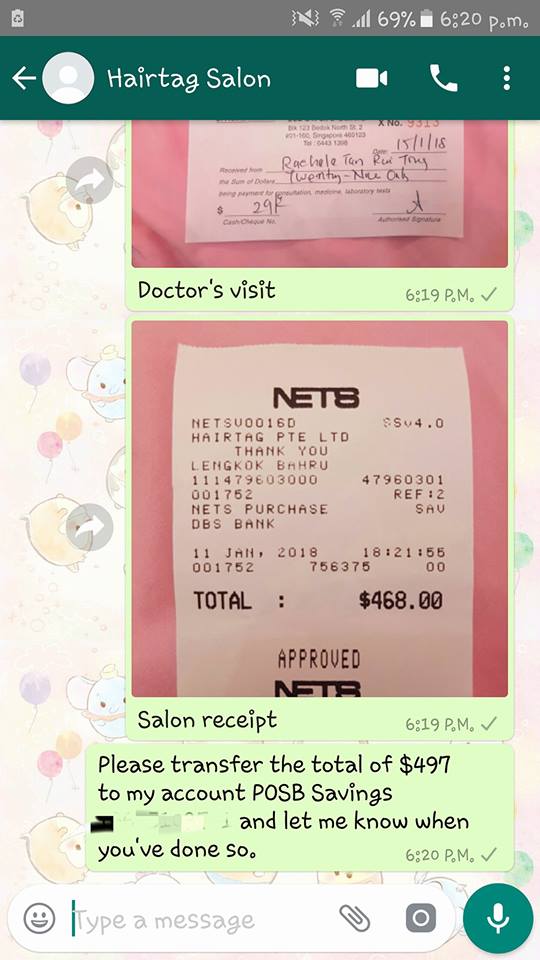