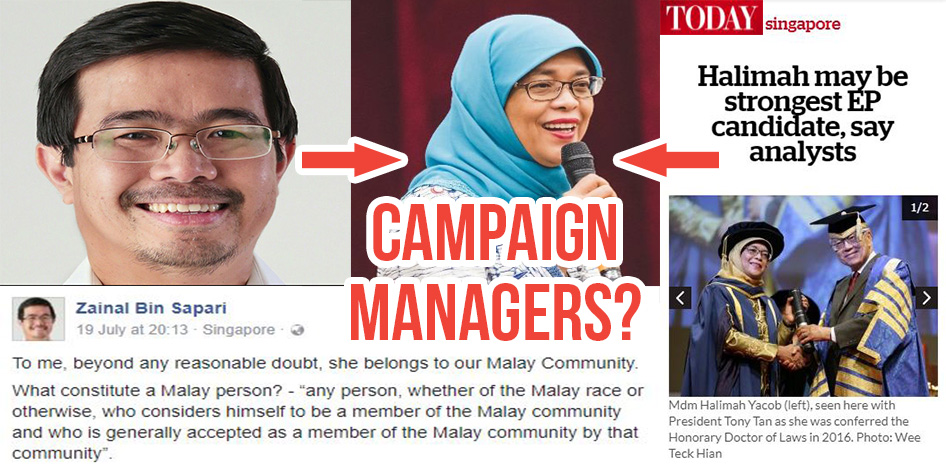 Who needs the Presidential Elections Committee? The body that will issue certificates of eligibility to potential presidential candidates, based on whether its sub-committee deems them “Malay” enough, has nothing on Mr Zainal Sapari.

The member of Parliament for Pasir-Ris Punggol GRC has already certified Speaker of Parliament Halimah Yacob as Malay, doing much of the work of the Malay community sub-committee under the member Community Committee. Will an eligibility certificate now be forthcoming for Mdm Halimah?

This is despite Mdm Halimah not confirming that she is going to run for the upcoming presidential election in the first place, but merely saying she’s “thinking about it”. Read our story about Mdm Halimah’s definite maybe on running for president.

But that didn’t stop Mr Zainai from “confirming” that she’s eligible to run in the first presidential election reserved for members of the Malay community, amid questions over her eligibility given that her father was Indian Muslim.

In a post on his Facebook profile on Wednesday (July 19), Mr Zainai said Mdm Halimah belongs to the Malay community “beyond any reasonable doubt”:

He cited Article 27A of the Parliamentary Elections Act, which says:

He also gave the same response to questions on Facebook regarding Mdm Halimah’s eligibility:

If he’s not trying to do the Presidential Elections Committee’s work, perhaps he’s angling for a role as Mdm Halimah’s campaign manager if she finally announces her candidacy?

Media Beats Him To It

Mr Zainal will have to queue up if he wants to be Mdm Halimah’s campaign manager.

Even before Mr Zainal “offered his services”, the mainstream media beat him to it by publishing a report declaring Mdm Halimah as the strongest candidate to run for president.

Amid bids by 2 candidates, Second Chance boss Mohammed Salleh bin Marican and marine company chief Farid Khan, to run for president so far, the report by Today posted on Tuesday (July 18) interviewed a few political analysts, who argued that Mdm Halimah’s “long record of public service” and her familiarity among voters made her the “front-runner for the highest office in the land”.

Though the addition of racial criterion for the upcoming presidential election has caused controversy, this is further exacerbated by the definition of what constitutes being Malay.

And so far, the 3 potential presidential candidates have racial heritages that complicate their eligibility. Mr Salleh, like Mdm Halimah, has a father of Indian descent, while Mr Farid has declared his Pakistani heritage.

In Singapore, children often take on the race of their fathers, hence could Mr Salleh and Mdm Halimah be considered part of the Indian community?

Many seem to think that is Mdm Halimah is thus considered Malay, some goalposts may need to be shifted:

And made the good point that Yayasan Mendaki, a group that helps Malays, declines assistance to people of Indian descent who speak Malay.

Others, jokingly or not, proposed a way for former presidential candidate Tan Cheng Bock, who has so far failed to challenge the validity of the reserved presidential election, to run for election this time round:

Anyone could declare themselves to be Malay.

With so many “blurred lines” popping up on ahead of the presidential election, some Singaporeans just can’t help but think that the reserved election is just a way to stop Dr Tan from running for president again, after he almost won the last time round..

But, back to Mr Zainal.

With both him and Mdm Halimah hailing from the ruling People’s Action Party (PAP), Singaporeans undoubtedly had their reservations over taking the latter’s endorsement at face value.

And with Mr Zainai and the mainstream media already starting to endorse Mdm Halimah for president, it may just be a matter of time before other politicians follow suit.

After all, as early as February, when Minister in the Prime Minister’s Office Chan Chun Sing accidentally addressed Mdm Halimah as “Madam President” twice, there seemed to be no doubt on whom he already saw as the future president of Singapore.

At the time, his error was met with laughter from the entire parliamentary sitting.

But if it was really a Freudian slip, and Mdm Halimah has been seen as the chosen one from the start, many Singaporeans won’t be laughing.

And given that today is Racial Harmony day, perhaps it would be useful to remember that reserving the presidential election for a specific race may not be the best way to show that we have progressed into a multiracial society where race doesn’t matter — in fact it seems to be making Singapore more race-conscious than ever, as people’s ethnicity is discussed and dissected.