It’s that time of the year when you head on over to Halloween Horror Nights at USS. From 3rd October, people get scared out of their wits as they go through the various terrifying exhibits. Filled with scary attractions and “supernatural creatures” of all kinds, this outing is meant to be a hair-raising experience.

Ironically, the true demons were some of the guests, who molested, punched and kicked the actresses. Here’s what one traumatised actress posted on Facebook: 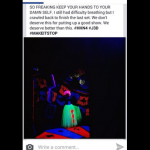 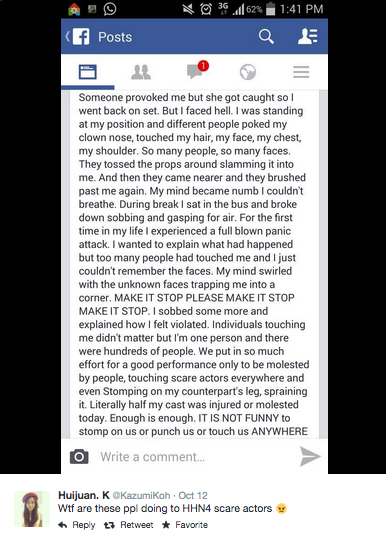 The post has since been removed, but is still making its rounds on the internet. One can only imagine how terrified she was.

Molest Is Molest, Not ‘Roughhousing’

Both Channel News Asia and TODAY Online ran the story and used the word “roughhousing” to describe the experience. However, what the actresses experienced was not in the form of play, as the word ‘roughhousing’ implies—they were cornered, molested and sexually violated. Let’s call these violent acts for what they are instead of using words that trivialise their experiences. Want more proof? Here’s what a performer known as Min told TODAY:

“It’s more common for the scare crew in the haunted houses to be attacked compared with the scare crews in the zones because it’s enclosed and they [guests]  think that nobody can see them provoking the scare crew. One of the more serious cases that were reported to us was last year, when one guy kicked one of the female performers’ crotch and punched her for scaring him.

It’s not just women who were hurt; one actor by the name of Neo Ri Xin suffered as well:

“He (one of the guests) punched me in the nose, but it wasn’t a very hard punch. And another time, I scared a girl and her boyfriend pushed me.”

Although RWS has safety measures in place, such as the “no contact” rule, it appears that guests have violated these actors year after year when making their way through the “haunted” areas. Simply put, some guests think they can get away with molesting these actors as they have disguises on—it is easier to shut off one’s empathy when you cannot perceive the “ghoul” in front of you as a person. Stating that this is roughhousing trivialises their concerns and diminishes the legitimacy of their claims—molest is molest, and the aggressors should be held accountable for their actions.

Words are powerful. By using this “euphemism,” the violence that was enacted on these actors is belittled, and is an attempt to cover up how badly they have been treated. This incident shows the entitlement that some people have towards women’s bodies, and that Halloween can be used as an excuse to be jerks. RWS  has done a damn good job with Halloween Horror Nights 4, but it seems we cannot have events like these without a few brutes ruining a night of fun.