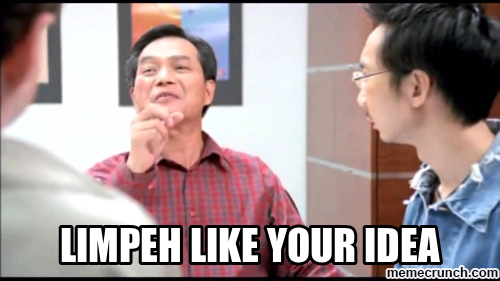 A local Reddittor named “crimsonSoldier” has spent an unholy amount of time collecting and translating uniquely Singaporean Hokkien swear phrases and even assigning them a value of offense level.

The list, delivered in two parts, is just about handy enough to guide the uninitiated through army and school life. The writer compiled the list for Singaporeans to understand these everyday utterances and prevent misuse.

Here is the explanation of offense value:

0 – Like any other word.
1 – Use freely with anyone except in interview or with teacher.
2 – Can use in mild argument or to scold someone you are familiar with.
3 – Use when angry (e.g you tripped and hurt yourself, someone honk you). Used directly to someone’s face, will make him angry.
4 – Use it to start a fight.
5 – Better not to use at all.

While here is the post in full (“X” means original character unknown):

Literally means someone with overgrown eyebrows. Use to scold someone as retard. Example.

Literally “give people to F”. Use it to mean that you (or someone else) are in trouble. Shortened nicely to “hong kan” in army.

Used also in Taiwan. “F your mother”. But the Singaporean way of saying it, KNN (bastardised pronounciation – ka ni na), is unique.

In original meaning, crying like your both parents died. Use it to describe someone who is whining. Don’t use it if you are PM of SG. Taiwan use 哭饿/kao yao (cry like you are hungry ghost).

Sibei good = “f*cking good”. sibei hungry = “f*cking hungry”. You use it as if it means “very …..”. Except that sibei means one’s dad died. Hokkien Singaporeans borrowed it over.

Shortened form of kan-lin-lao-bei/kan-lin-lao-bu (F your dad/F your mum) respectively. Only Singaporeans shorten it this way.

Offense Level: 3 or 4 if shortened. 5 if original long form.

“Your mother very good.” This is used when you want to say KNN, but want to be polite about it. Totally same as 你娘更好/lin nia ka ho. Example

“Sickness and early death”. Can use “pua peh” standalone to mean that someone fell sick. Can use “yao siu” to describe immoral behavior/person. Example. Used in scolding as 4 words together to curse someone die early from illness.

The Teochew version of above. Means “evil person early death”. Not much to say lol. Example.

Popular Chinese names in the past because parents then were not well educated and couldn’t give their children good names. Singapore ended up with MANY people named Beng and Lian/Noi (Ah Noi is Teochew pronounciation of 莲). Use it to call someone a low-life or uneducated.

Part 2 even discusses the differences Asian and Western swear words and terminology.

I will write about some of the slang of Hokkien/Teochew origin that has creeped into Singlish or daily usage, including swear words.

He questions why Hokkien, Mandarin and other Chinese languages have so many swear words and non-swearing slang based on parentage or involving family? And contrasts this with Western slang, which seems to invoke religion more.

As this Taiwanese talk show speculates, 倫理 or “the natural order of things” is very important in Chinese communities traditionally. Implication of relations with someone’s else parents or calling in question his parentage is a way to mess up this “order of things”. This China Teochew show also explains the significance of parents, especially the dad, in swearing: basically the dad is the respected head of the family. On the other hand, you’ll see many biblical references in Western slang and swearing, such as the Devil, God, Jesus, Christ, “Holy …..”, “Damned …..”, which show the importance of Christianity in Western culture.

Literally “my dad!”, an exclamation similar to Mandarin’s 我的媽. Used in times of surprise or shock. Example usage by Singapore legendary comedic duo Wang Sa and Ye Fong. Less used in Singapore in modern times, but still used in China a lot.

Literally “your dad”, used to describe oneself in third person, implying that oneself is the dad of the person being spoken to. Example.

Offence Level: 1 or 3, depends on your age relative to the other person and friendliness.

Literally “my brother!”, pronounced as “nao hia” sometimes. An exclamation of surprise or unhappiness. Not used to scold. Example.

Literally “mixed seed child”, used to scold someone as a “bastard child” or “mixed blood child”. Remember that birth out of wedlock and mixed marriages were taboo to older Chinese. Example.

Dialects are the lingua franca of the older generation

However, dialects remain the lingua franca of the older generation, and are the only languages that many can speak to their grandparents. Despite 35 years of the Speak Mandarin Campaign, dialects still resonate with the population, as evidenced by Jack Neo’s copious use of dialects in his films, and more recently with ShiGGa Shay’s single, LimPeh, which reached No.1 in the local iTunes chart within a week of release and music video has almost 500,000 views.

Losing the ability to speak the same languages as our forefathers not only denies us a chance of getting to know and understand their stories, but also losing a link to the past.