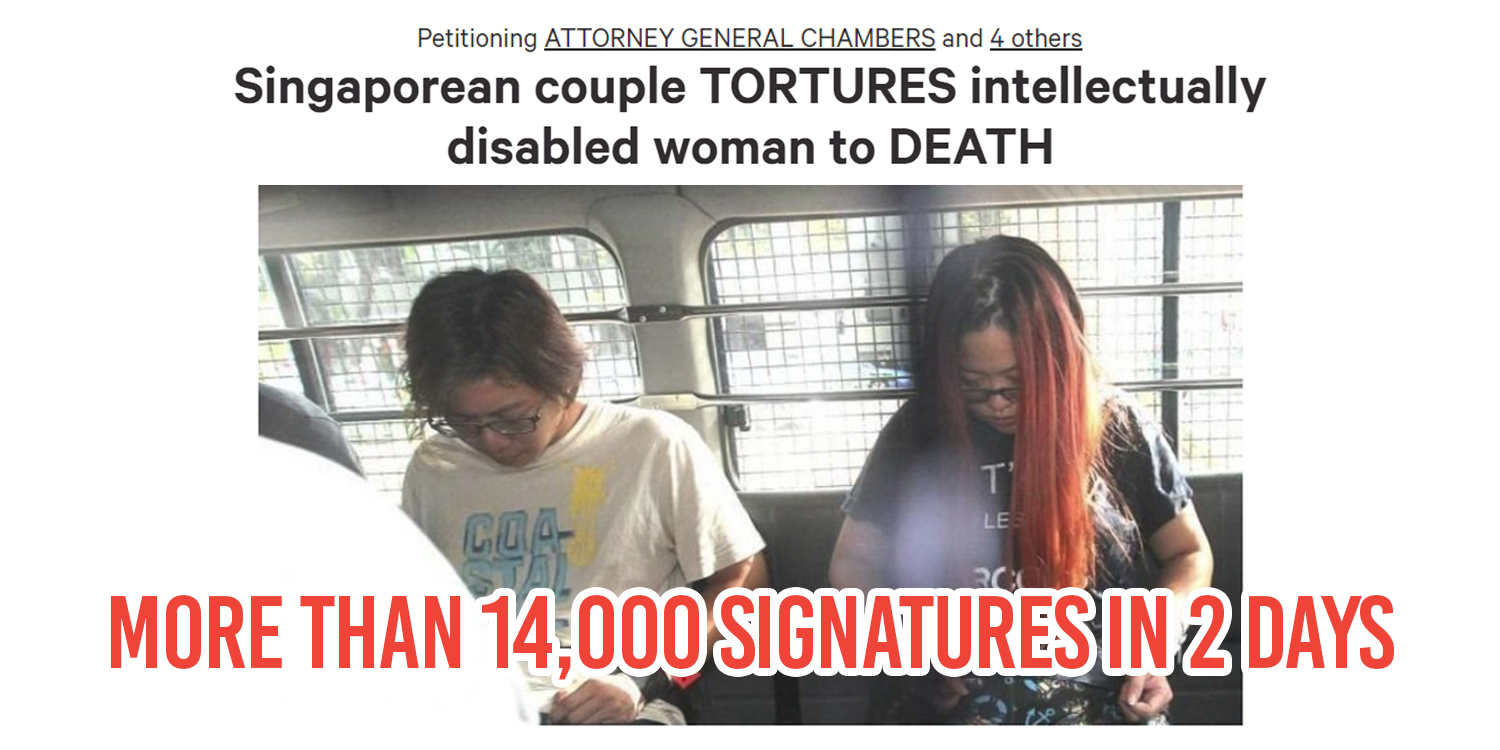 Over 14,000 Signatures Support Harsher Punishment For Couple Who Tortured Woman

Despite the death penalty playing an important part in Singapore’s criminal justice system – with 80% of its residents firmly supporting it – it’s not often you see a nation calling for someone to be put to death or locked away forever.

But for Tan Hui Zhen and her husband Pua Hak Chuan, they’ve managed to accomplish just that.

Following news of the gruesome torture by the couple on their flatmate – which ultimately led to her death – it was reported that prosecutors are seeking 15 years’ jail for the woman and 14 years jail and 12 strokes of the cane for the man. This sparked national outrage in what many consider to be “too lenient” of a sentence for such monstrous acts. Just take a look online and you’ll find comments such as this aplenty:

Which prompted netizen Neo Chuan Yi to start a petition calling for the Attorney General Chambers (AGC) to mete out a harsher punishment for the culprits. Here’s the link to the petition.

On Monday (27 Nov), it was reported that in 2015, the couple had caused the death of Annie Ee – who has intellectual disabilities – after 8 months of physical and mental torture. Deputy Public Prosecutors April Phang and Claire Poh described the torture as stripping her of “her money, her dignity, and her will to live.”

Below is the list of abuse that Annie went through. Be warned, reader discretion is advised:

The culprits had also psychologically abused her by undermining her sense of self-worth and questioning her regularly. She was also made to surrender her monthly salary of $1,200 and was given only $50 – later cut to $30 – as weekly allowance.

If that wasn’t enough, Annie had tried to commit suicide the day before her death by slitting her wrists using a pair of scissors as she felt “useless” and did not do what Ms Tan had told her to do.

Furthermore, the couple had tried to cover their tracks when they discovered her lifeless body by initially claiming that she had committed suicide. They also informed police officers that Annie was a clumsy person who would often injure herself by repeatedly jumping and landing on her buttocks for “no apparent reason”.

At the time of her death, Annie was found to have suffered the following: 12 fractured ribs, 7 fractured vertebrae, a ruptured stomach, and blisters and bruises all over her body.

The icing on this horrendous cake? The victim had considered the attacker her longtime friend — whom she simply wanted “acceptance and affection” from.

Naturally, Singaporeans were livid once they realised what Annie went through during her final eight months.

Which is why many felt that 15 years was too generous a punishment for Ms Tan. Hence, a petition was started to seek out a harsher sentence for the couple. 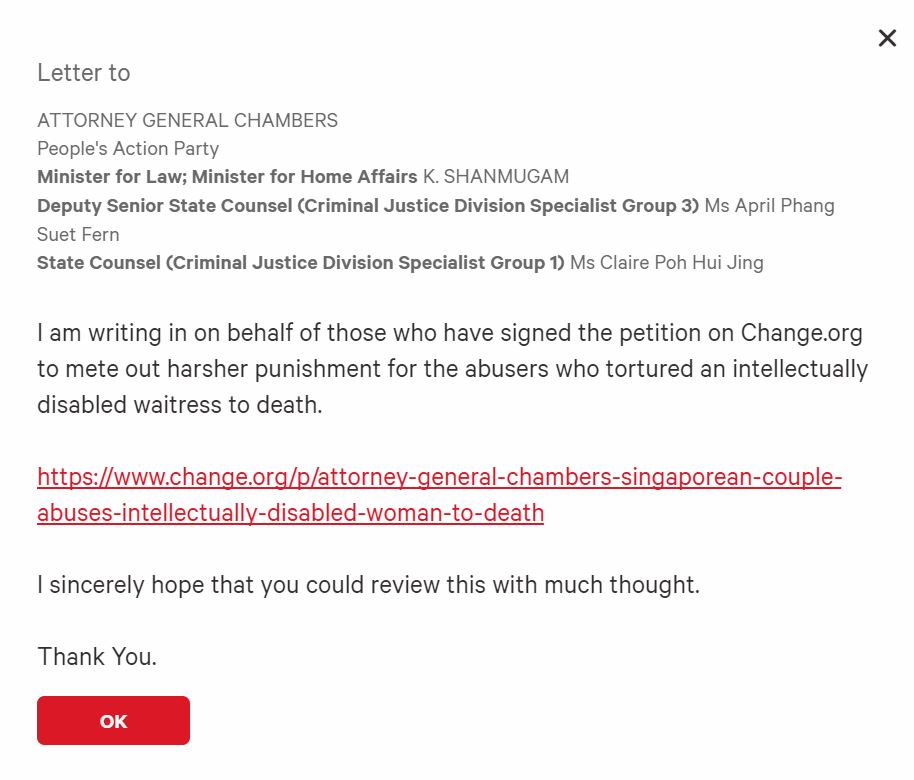 Receiving more than 14,000 signatures in slightly over a day, Neo hopes to make a difference by presenting the petition to the AGC.

We will NOT tolerate lenient sentencing of inhumane abusers who exploit the weak.

Of course, it’s understandable that some may be skeptical on the legitimacy of an internet petition. Because why would the law take precedence over public interest?

However, take a look at a speech by Attorney-General Lucien Wong on “Prosecution in the Public Interest” during the Singapore Law Review Lecture 2017.

This effectively shows that public interest can indeed make a difference when it comes to court sentences.

If you still need more proof that Singaporeans are supporting a harsher punishment for the couple, check out the outrage that’s pouring online on Facebook, 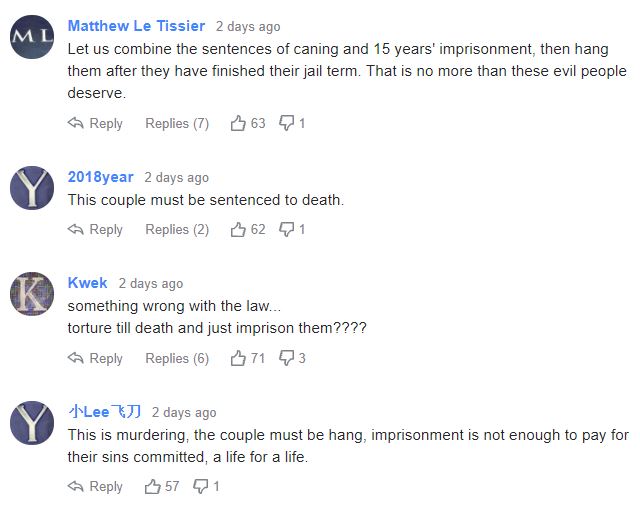 Once again, the petition can be found here.

We here at MustShareNews absolutely do not condone any acts of torture. What happened to Annie was downright horrifying and inconceivable.

Do you agree with the pending sentence? Or should the couple be punished with something closer to what Annie went through?

Ms Tan and Mr Pua will be sentenced on Friday (1 Dec).