Must Share News – Independent News For Singaporeans
Home News HDB Wants To Kick Out 3 Cats Because Their “Noisy” Owner Says... 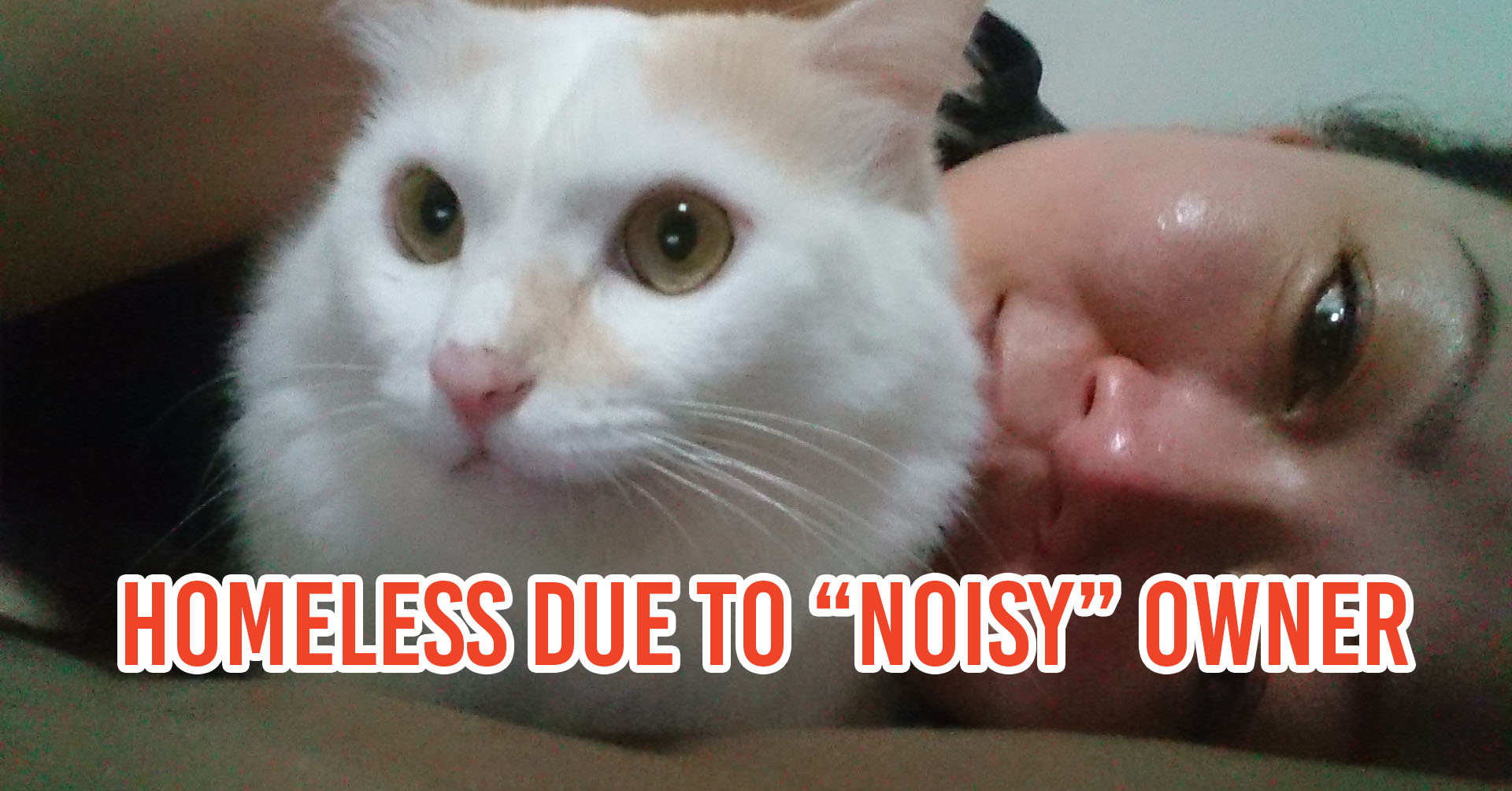 Owner Told By HDB To Rehome Her Cats

The Housing Development Board (HDB) has just started Part 3294 of its war against cats, and it’s still as unjustified as ever.

Remember when the HDB sent this annoying letter to a resident about his cat late last year? This time, HDB is trying to exict 3 cats not because of anything that they actually did, but because of a complaint that their owner makes too much noise when she says “hi” to them. 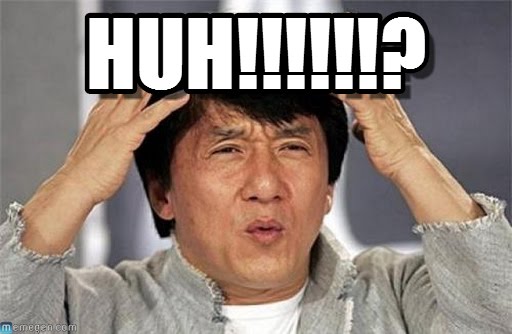 The Cat Welfare Society on Wednesday (April 19) highlighted a report in the Chinese newspapers about Ms Serene Tong, 42, who was given one month by the HDB to rehome her 3 cats, as the animals are still not allowed in HDB flats. 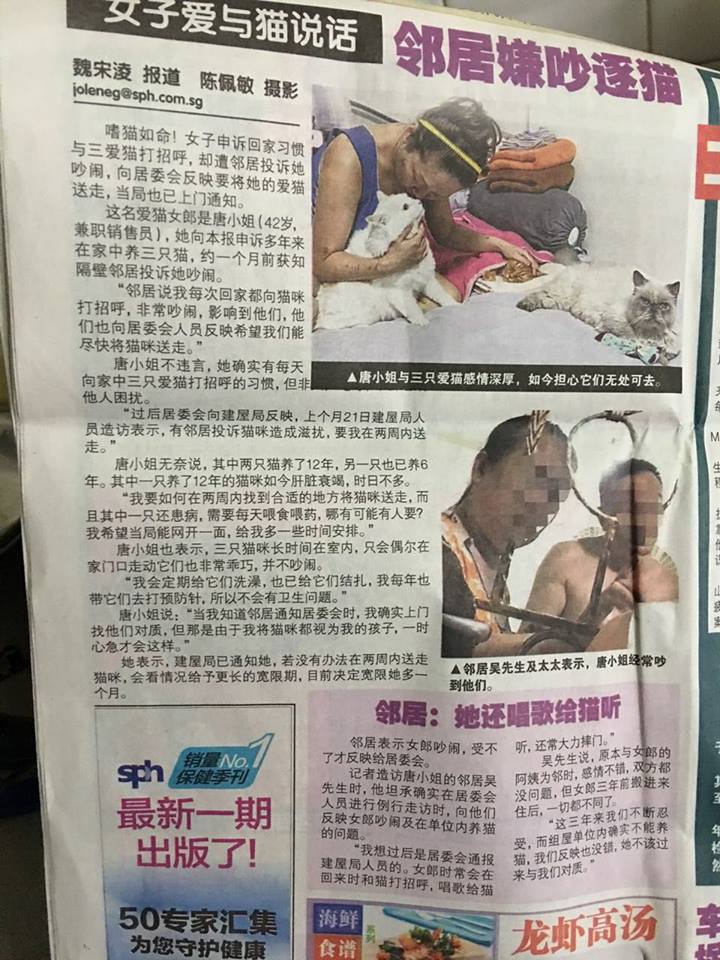 Of the 3 cats, 2 of them were raised by her for 12 years, while the other has been in her care for 6 years. One of them has liver failure and won’t live long more. The cats spend most of their home indoors and don’t bother anyone at all. Here’s the full post from the Cat Welfare Society: 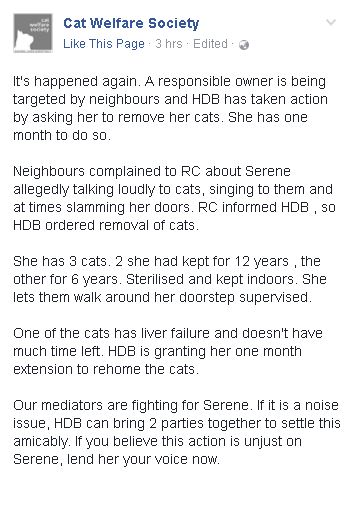 Worse still, this is all happening because of a complaint from her neighbour, who didn’t mention that the cats were meowing incessantly or leaving their waste along the communal corridors.

The neighbour’s complaint was that Ms Tong herself was noisy.

Basically this is what he said:

It doesn’t take a rocket scientist to figure out all the complaints revolve around Ms Tong rather than the cats — even if the cats weren’t around, she can still talk, sing and slam doors just as noisily.

We can’t help but speculate that it seems like the neighbours don’t have a problem with the cats, but the owner instead.

However, they can’t get the HDB to evict Ms Tong, but they can get them to evict her cats.

Facebook user Harry Chen summed it up perfectly. Why on earth is HDB going after the cats? Shouldn’t they be dealing with Ms Tong instead? Hate The Owner, Target The Cats?

In the article, the neighbours, known only as Mr and Mrs Wu, were even quoted as saying that they were on good terms with Ms Tong’s aunt but it all changed when Ms Tong moved in 3 years ago — an admission if there ever was one that it’s Ms Tong they just don’t like.

And Ms Tong has also claimed on Facebook that the neighbours have complained about “stupid and unreasonable things” for years”.

And why is the HDB helping to faciliate this apparent grudge match, instead of trying to mediate between the warring sides?

Ms Tong’s neighbours and the HDB were in for some harsh criticism as netizens roasted them.

Going by HDB’s logic, should children be removed too in the event that one’s neighbour speaks too loudly to their child? 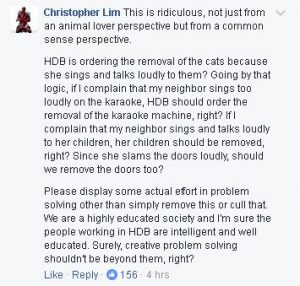 You know what’ll be a win-win situation? Relocating the intolerable neighbours instead.

The HDB is a shared living space with hundreds of other residents, so it’s inevitable for disagreements to surface every now and then. Neighbours should be more accommodating so that everyone can live together harmoniously.

Many wanted to help Ms Tong:

We aren’t sure whether it will help, but the Cat Welfare Society has asked people to share their Facebook post, and write in to Deputy Prime Minister Tharman Shanmugaratnam, who is also a member of parliament for Jurong GRC, at [email protected]

It’s true that the current rule is that cats are not allowed in HDB flats, and the HDB is just enforcing it. And the neighbour is also entitled to complain about the noise that Ms Tong makes, no matter how small.

But it is glaring that the cats are being punished despite not being the actual subject of the complaints, and it leaves a bad taste in the mouth.

No matter what beef that residents have with each other, the cats are innocent — It feels like the poor cats are just being used as pawns in a war, and the HDB is complicit in this.

It’s probably just as bad as when the statutory board was accused of asking a single mother to leave her flat over $99.