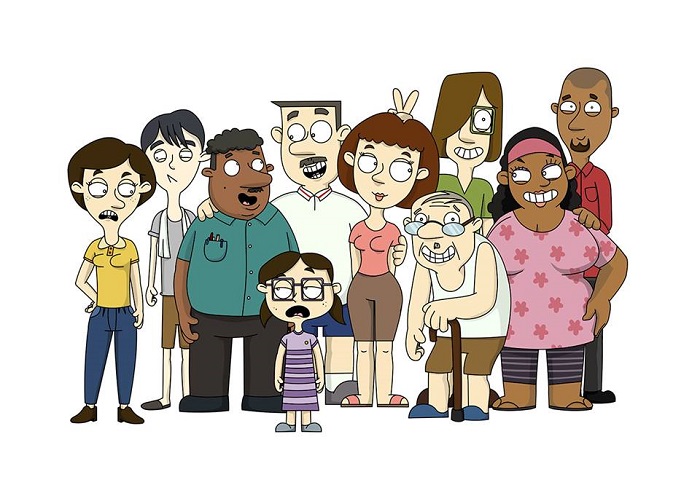 Channel 5’s first animated series is produced by local animation studio Robot Playground Media. The animation features Lim Yu Beng, who voices retired army Warrant Officer Encik Lim Teh Peng (not quite the best name but ok), now running a minimart, much like Tan Ah Teck did. He spends most of his time tending to his shop, going for coffee breaks, and feeding neighbourhood cats.

If you haven’t watched Heartland Hubby yet, here’s the first thing you need to know. Despite the many comparisons with The Simpsons, Heartland Hubby is not quite a rip-off of the long-running American cartoon. This one is probably more like Family Guy.

Unlike other direct rip-offs, Heartland Hubby is actually funny. Not laugh-out-loud funny, but more of a chuckle-a-minute funny. And we love it. To prove our point, here are 11 more reasons why we love this local animation.

This is your first ever chance of seeing a HDB block immortalized into animation. Not counting that Counterstrike 1.6 HDB map or those paintings Under One Roof used as background. The animation here looks pretty good too, considering just how thankless an animator’s job is.

At the start of every episode, Encik Lim spots an empty parallel parking spot and manages to drift his tiny hatchback into the space before his arch-enemy can. With skills like that, we reckon Encik Lim could do really well for himself in Tokyo.

Check out his sweet drifting here:

Like other American sitcoms, animated or otherwise, Heartland Hubby derives much of the humour from cutaway gags of flashbacks or fantasy scenarios. And these sequences are appropriately over-the-top. Like this bit where the Encik Lim and his best friend Staff Siva are dramatically introduced (they’re collectively known as “Lethal Weapon”): 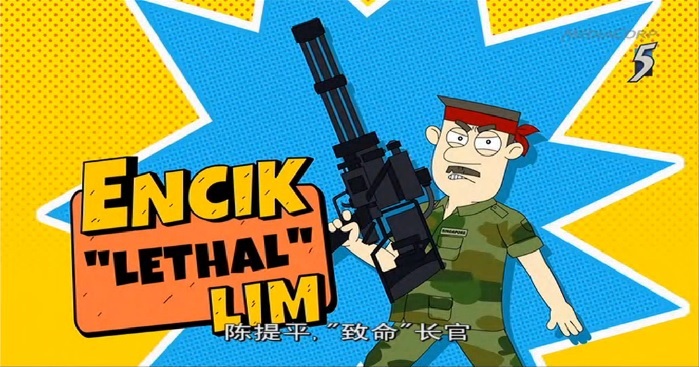 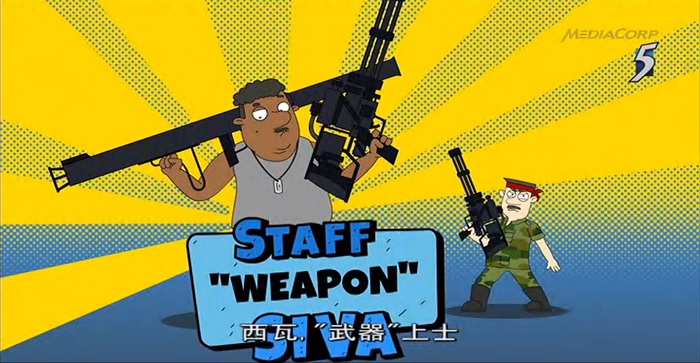 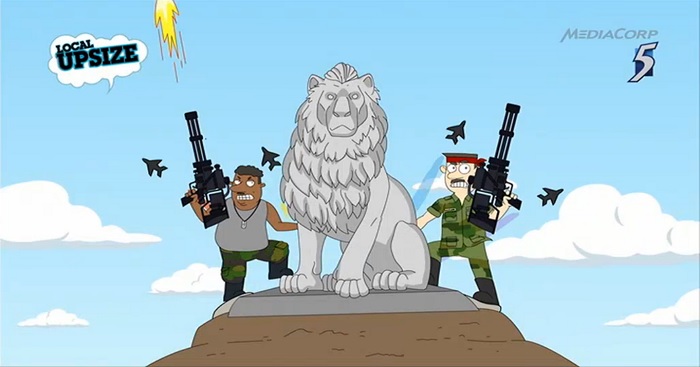 For years, Lee Kim Mun was probably Singapore’s funniest man to never regularly appear on television. Well, we never actually see his face on Heartland Hubby either, but Singapore’s Blogfather lends his voice to Snoopy “Sniper” Swee, Encik Lim’s arch-enemy and resident villain. Anybody who’s heard upwards of  5 mrbrown’s podcasts will immediately be able to recognise that trademark Singlish accent.

What’s a Singaporean comedy without the Singlish? Thankfully, those dark days when the PM forced Phua Chu Kang to learn ‘proper’ English are over. Watching animated characters speak our national creole with unmistakably Singaporean accents might take some getting used to, but the entire experience is utterly satisfying.

Bart Simpson has his blackboard gags, and the Lim family has their dinner gags. At the opening credits of every episode, Encik Lim returns home with bags of food, but walks in to see his family already tucking into various local dinners.

So far, the family has been caught eating steamboat, 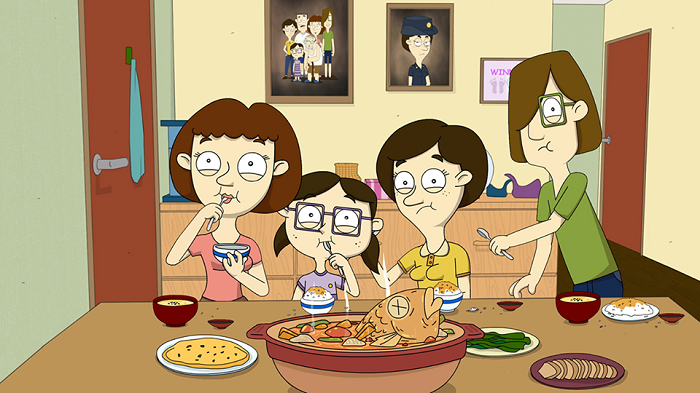 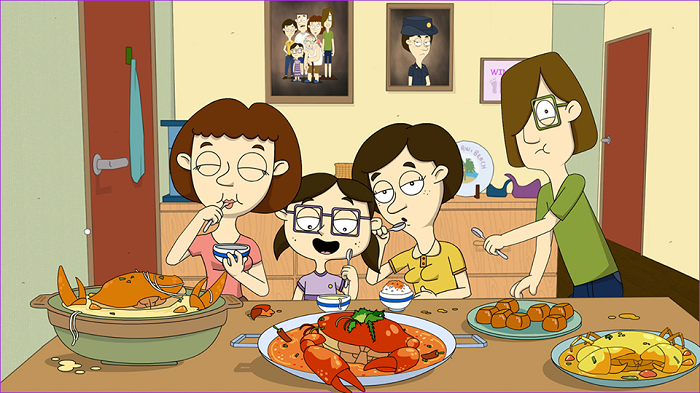 Xiao Zhong is Encik Lim’s minimart assistant, voiced by Alaric Tay. He effectively recycles the voice of the non-Singaporean coffeeshop worker on The Noose, but the comedic timing is perfect. Xiao Zhong’s broad Chinese accent and mix of Mandarin and English had us in stitches. His name literally means “little medium” — two different sizes which makes absolutely no sense. 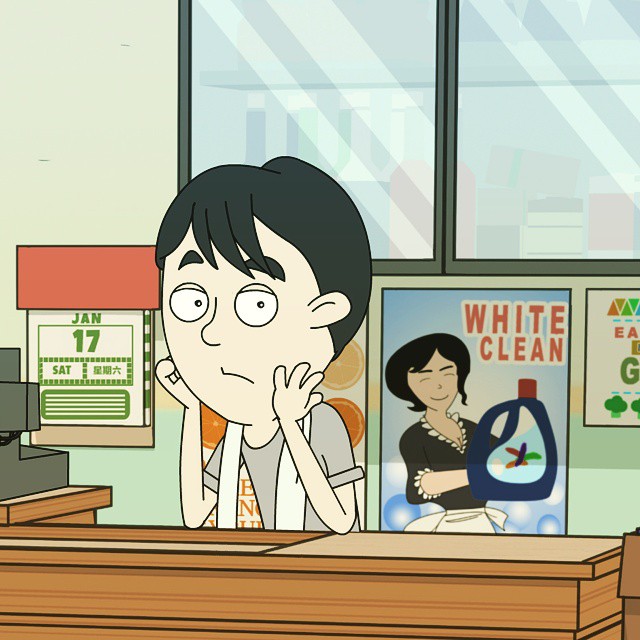 Tay also voices one of the resident neighbourhood cats and an Foreign Talent fish. More about the animals later. 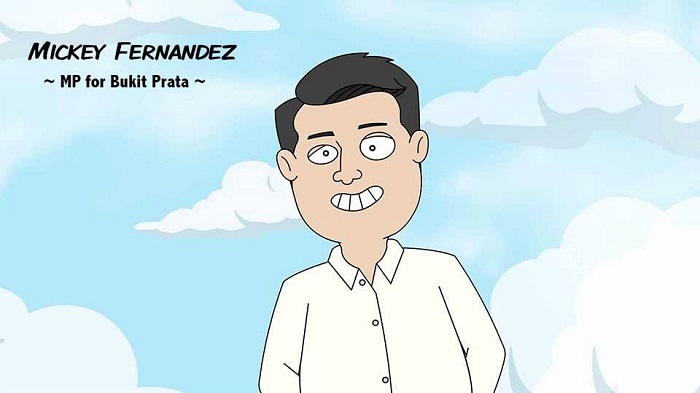 Micky Fernandez is the Eurasian MP who actually hangs out at his constituency, visiting neighbourhood minimarts and coffeeshops. He also happens to be particularly charming and is known as an auntie killer. Not naming names, but this character seems pretty familiar. Maybe a former lawyer with the last name Palmer?

A sitcom without jokes is a bit like that other Channel 5 show — the about that American Chinese who suddenly moves to Singapore and is named after a bunch of letters. Thankfully, both dialogue and content are fiercely Singaporean in this case, and probably won’t be understood in too many places outside of our island. 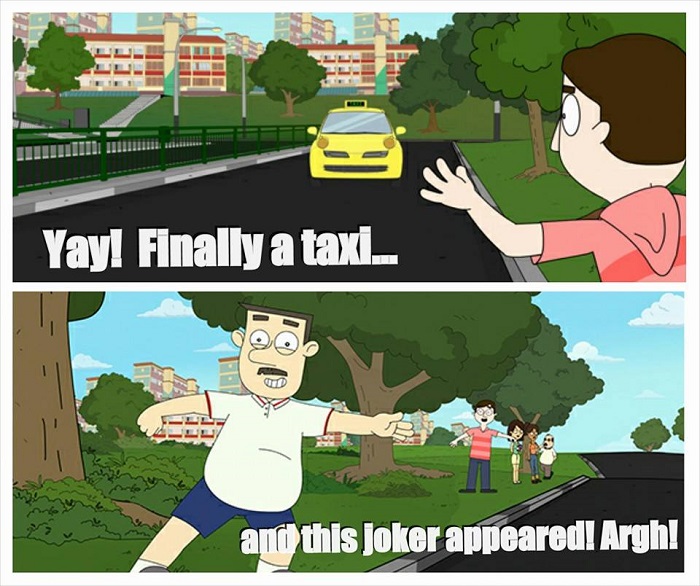 The jokes are witty, especially when seen here, when one cat tells another that a beating by his girlfriend constitutes animal abuse.

Introduced in Episode 2, George Hilton is a multi-billionaire who moves to Singapore and moves into a HDB. The British expat is the co-founder of social media site MyFace. George does his best to fit in with the locals, from learning Singlish to making his own chicken rice. He is also presumably a reference to Facebook co-founder Eduardo Saverin, who moved to Singapore in 2009. We’re not quite sure if the real-life billionaire will actually choose to live in a HDB though.

Despite all the elements listed above, the talking animals greatly outshine the humans on Heartland Hubby. From a mat cat named Cha Cha, a French uppity poodle named FiFi, to Gunter the German guard dog (who honestly sounds more like Arnold Schwarzenegger), the animals thoroughly steal the show with their unique personalities and varied accents.

But the best bit surely has to be the arowana (once again played by Alaric Tay) who curses at the cats in Mandarin.

Local animation not so lacklustre after all

So there you have it. 11 reasons why you should really be watching Mediacorp’s latest animated attempt. We think you’ll really like it if you just give it an honest chance.

Heartland Hubby airs on Channel 5 every Wednesday, at 9.30pm. Or, catch it on xinmsn here.