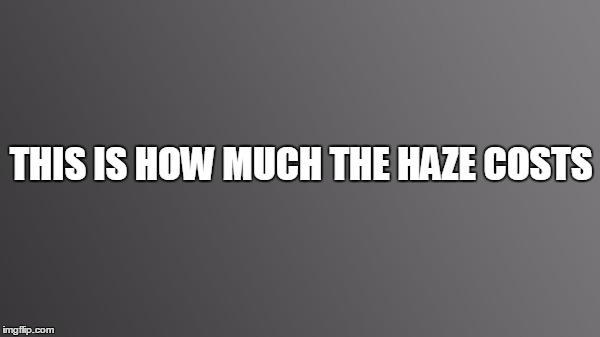 It’s all about that haze

As more and more people are coming down with illnesses relating to the haze, people are getting angrier at the Indonesian government, which has refused Singapore’s assistance to put out the forest fires causing the haze, even though they’re clearly not doing a very good job of it themselves.

One thing Singaporeans really want to know is: How much does all this pollution and smoke cost Singapore, in terms of dollars and cents?

The Institute of Southeast Asian Studies, an autonomous research organisation, published a detailed report in 2006 that broke down the economic costs of the 1997-1998 haze to Singaporeans.

Bear in mind that all these figures are from 1997, and are worth more today. Here’s what the research paper found.

To arrive at this figure, they sourced the number of consultations for haze-related ailments. The less serious illnesses included ailments such as conjunctivitis, asthma, allergic rhinitis, and bronchitis. The more serious illnesses included those that had to be attended to in hospital Accident and Emergency (A&E) departments, such as pneumonia, asthma, and emphysema.

Next, they considered the costs of hospitalisation fees, consultation fees, medicine fees and treatments.

They compared the costs of consultations during a period during which the haze was at its worst with a ‘normal’ period in the same year, and took the difference in costs as the ‘excess’.

The average daily wage for a Singaporean was estimated at S$60–S$100.

A simple summation of the number of working adults who were on medical leave and hospitalised, multiplied by the average daily wage, comes to about S$2,132,070–S$7,084,650.

The adjusted cost of illness means that some people are not always willing to pay to treat their illnesses. For example, the haze may aggravate long-term health conditions, while some may experience minor illnesses that they feel too trivial to visit a doctor over. They used a ratio of 2:1 to arrive at this cost, which brings the total cost of illness to S$6–S$19 million.

There are also several health-related intangible costs that do not factor into this figure. These include general discomfort, general unhappiness with the reduced air quality, and loss of productivity.

They then considered the average tourist expenditure and also factored in the consideration that tourists may not frequent outdoor attractions such as dining at Boat Quay and Clarke Quay. Their final calculations produced an estimated loss to the tourism industry of S$81.8 million.

It is also notable that 1997 was the first year since 1983 that visitor arrivals to Singapore fell.

Some flights were cancelled and others delayed due to the poor visibility around Singapore. Carriers under the SIA group, which included SilkAir and Singapore Airlines, had to cancel over eighty flights and saw over 120 flights disrupted. As governments began issuing health advisories for travel to haze-affected countries, over 7,000 passengers cancelled their flights.

The total losses suffered by Singapore Airlines and SilkAir were estimated at S$9.7 million.

By summing up all the costs discussed, the researchers arrived at a total sum of economic loss of S$97.5 million – $110.5 million.

There are several interdependent costs that cannot directly be factored in, but which should be considered as well. For example, if the price of fish and vegetables increased in Malaysia as a result of the haze, then Singaporeans would have to pay higher prices for these products as well.

There were also several intangible costs. For example, if general happiness was affected by the poor air quality, it’s likely that work productivity would decrease. Outdoor shopping areas would also experience a loss of sales.

How much does the haze cost now?

This was in 1997. What about today? We would have to factor in the rate of inflation, the increased Singapore population numbers, and the higher cost of medical care.

So far, there is no evidence that the cost will be more manageable this time, so it’s safe to say that all that smoke blowing across the Singapore Strait is worth at least S$100 million — and most likely a lot more.

Hopefully, someone with the academic expertise does a study to derive the economic cost to Singapore. And then, as NTU professor Euston Quah suggested in 2013, we could bring the bill to a third-party country which has leverage over Indonesia and exert pressure on Indonesia to take more active efforts to fight the haze.

If not, we’ll be putting up with their snide comments all day: