Must Share News – Independent News For Singaporeans
Home Current Affairs Politics Parliament 101: 7 Interesting Things You Should Know About How The Singapore... 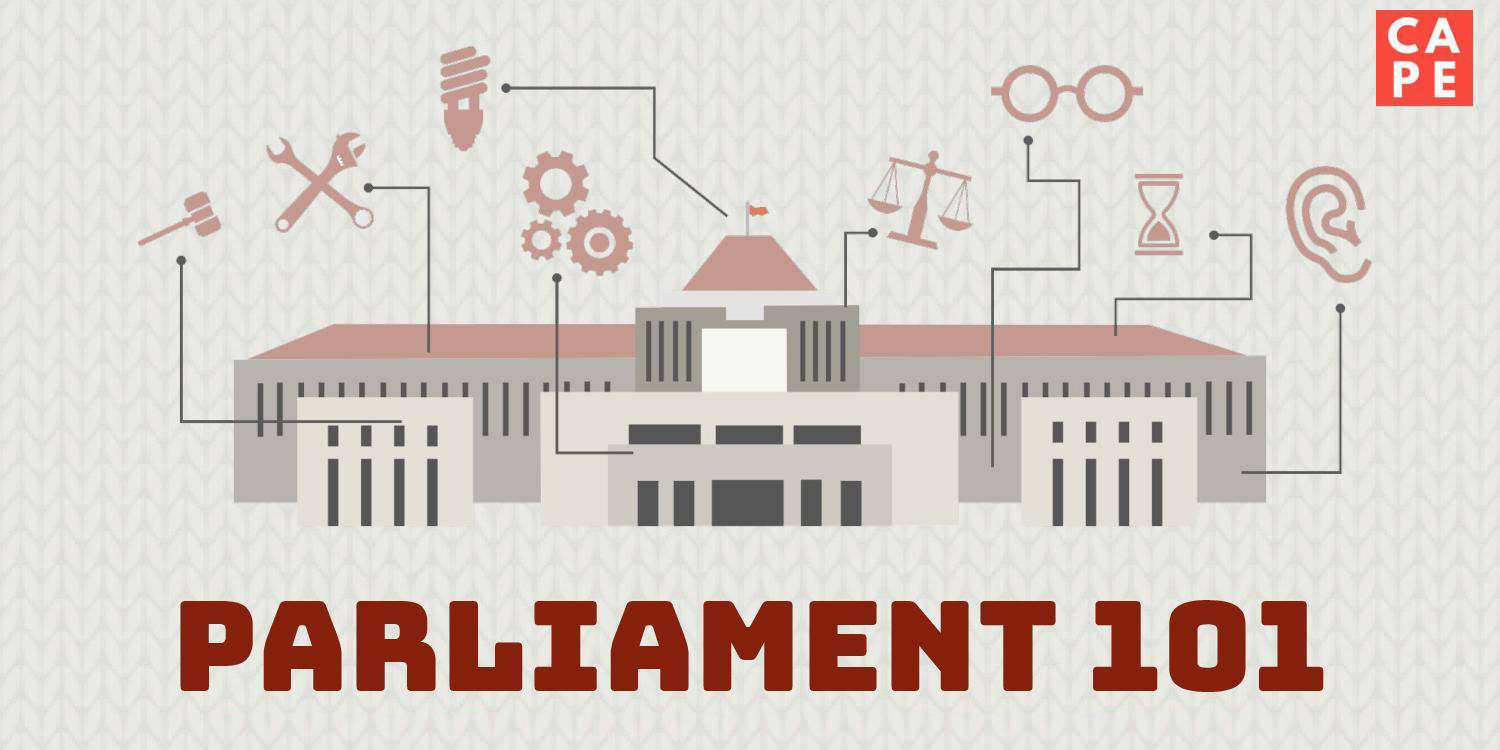 Democracy isn’t always infused with drama. In fact, politics is actually really boring most of the time.

Still, as citizens of Singapore it’s kinda our job to understand how laws are implemented here because you know, they affect us and stuff.

Which is why a group of students from Yale-NUS College and NUS Law came together to create a politically neutral organisation named CAPE – Community for Advocacy and Political Education – to educate us more about the Parliament.

So sit back and relax as they take us on a political education on how the Parliament actually works — in the form of a PowerPoint Presentation nonetheless. 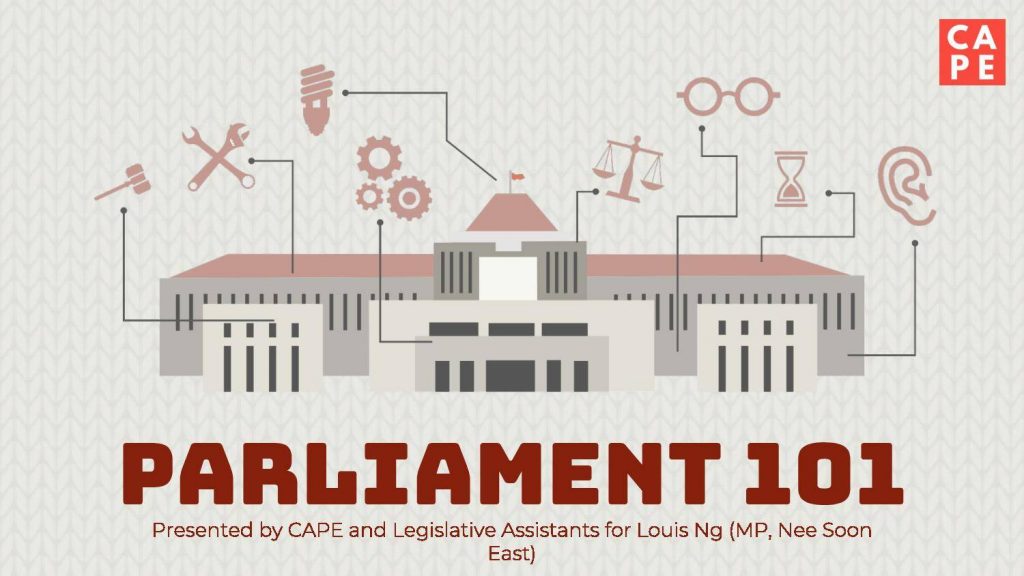 Without further ado, let’s check out some interesting things about Singapore’s Parliament.

1. What does the Parliament do?

The Parliament basically does three things:

Here are the following parties involved in the Parliament: In turn, the elected MPs are merely part of the system that actually make laws laws. Three entities are responsible for making laws, due to a concept known as separation of power:

This ensures no one party is able to create and pass laws by itself.

Held during every month except June and December, Parliamentary sessions usually lasts for 1 to 2 days.

In case you’re wondering, the sessions aren’t free seating or on a first come first serve basis — everyone has an allocated seating arrangement in Parliament. 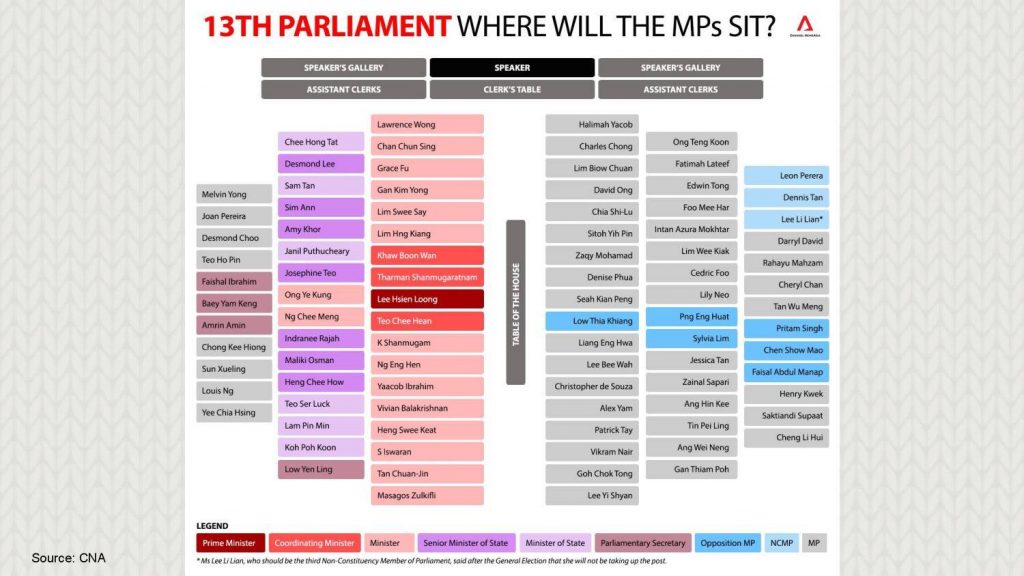 Except for the Nominated Members of Parliament, apparently.

But it does paint an interesting picture of the hierarchy of the Government.

Despite what Senior Minister of State Chee Hong Tat has said, Singaporeans generally are still interested in what goes on during Parliamentary sessions.

Unfortunately, while live streaming of the session isn’t exactly available, there’s the next best thing — their meeting agenda, which is made available a day before the sitting.

Official post-event reports of Parliamentary debates can also be found here. However, they’re only available one week after a sitting.

4. How laws are made in Singapore

Let’s now take a look at how laws are made before they become well, laws in Singapore.

Bills – proposed amendments to existing laws or new proposed laws – are presented by the Ministers where they will embark on a 7-stage journey. 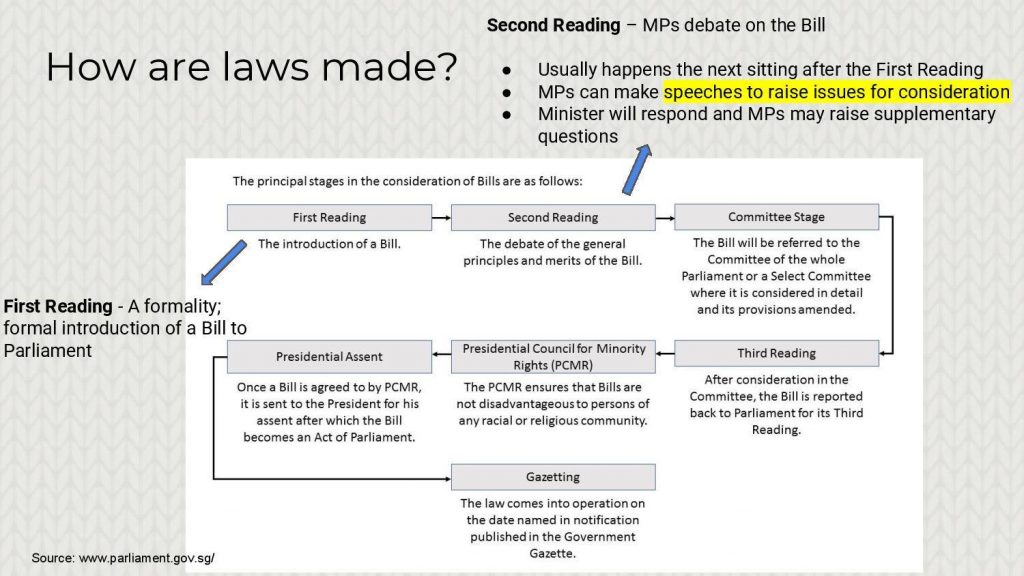 Here’s a summary of what happen throughout the process:

Furthermore, Bill speeches will also be drafted with civil societies – such as AWARE on the Women’s Charter Bill –  before being raised.

You – our humble reader – can actually get involved in the decision making process too!

Primarily via REACH, the official portal for public consultations on draft legislation and policies by the Ministries and Government agencies. Alternatively, you can either:

6. What happens if there are too many Motions?

Additionally, there are motions which can be passed on as well — and it’s definitely not what you’re thinking of right now.

Motions are either proposals for the House to take action on a matter or for one to express their opinion on said matter. They can come in the form of Adjournment Motions and Private Member’s motions.

As we all know, Parliamentary sessions run on a really tight schedule. So what happens then, if there is an abundance of motions being raised during any particular session? How do they decide on which gets the spotlight and which gets the boot?

Alternatively, there are also Public Petitions. However, they’re generally rare and have not led to any legislative change thus far.

Finally, you would think that the Ministries get to decide on whether said petitions get approved or not, right?

Check out the following slide which says otherwise. 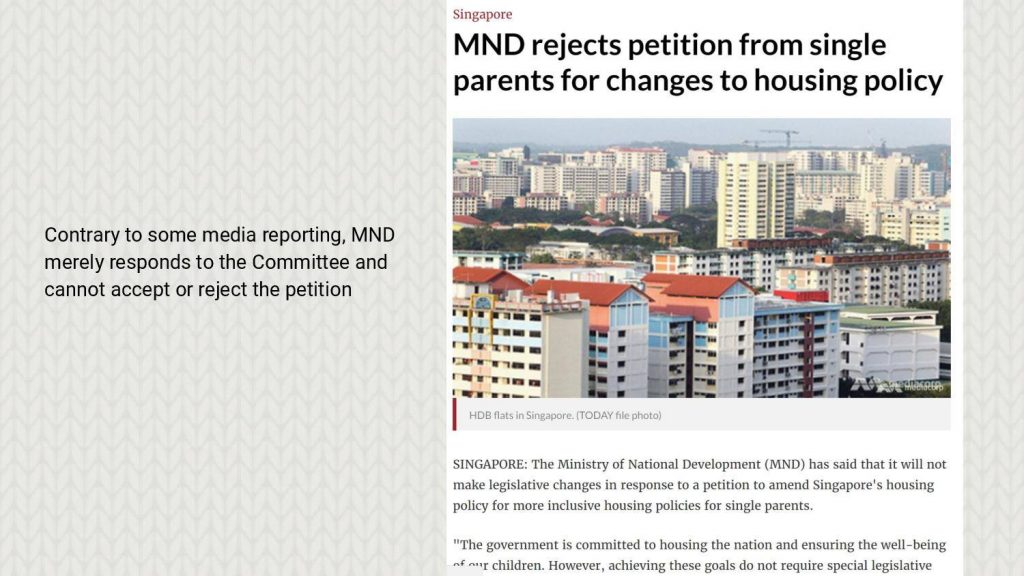 Isn’t it weird that the Committee gets to make the decision instead of the ones supposedly in charge of implementing them?

Did you learn something new about the Parliament? At the very least, you should now be able to understand the process of how laws are made here in Singapore.