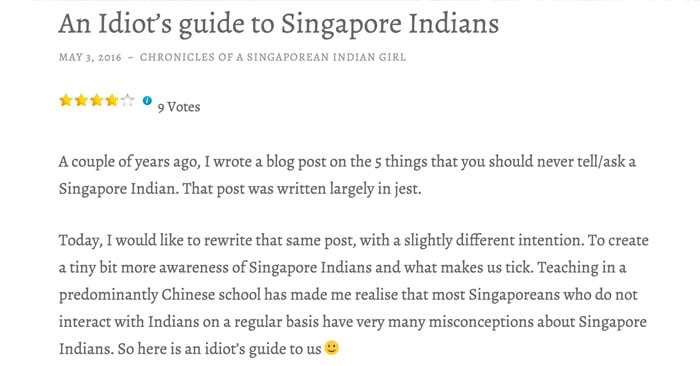 [UPDATE: The author has reached out to MustShareNews to clarify that the article was not written to address racism, but to correct misconceptions people have about Indians.]

You would think that in a multiracial society like Singapore’s, we would have forged a better understanding of one another’s races.

Alas, facts have proved otherwise. Racism still lingers in Singapore, as illustrated by this Facebook page that encompasses everything we ignore when talking about racism in Singapore. The topic of Chinese privilege is also constantly touched on, and the minority like Kiss92 DJ Joshua Simon are left questioning the lack of racial representation in local media. More recently, MP Denise Phua referred to the foreign workers congregating at Little India as ‘walking time-bombs’.

I have had many students ask me over the years why I do not have an ‘Indian Accent’. This is despite them knowing I am a 3rd generation Singaporean. I honestly do not understand why I need to have an accent any more than a 3rd Generation Singapore Chinese needs to have a ‘Chinese Accent.’ Having been born and bred in Singapore, It is perfectly logical that I sound Singaporean, as opposed to anything else.

2. On shaking heads while speaking

Also, we don’t shake our heads when we speak. Whenever people try to imitate Indians, for whatever reason, they end up looking like their necks came loose, and also a bit ridiculous. In fact, I don’t understand how anyone can speak like that. I tried, and ended up just feeling really nauseous.

First and foremost,  we actually have quite a few other options when it comes to food not involving curry.

Also, traditionally, curry is not an unhealthy dish. Turmeric, one of the important ingredients in curry has been proven to reduce the risk of cancer and heart attacks, as well as help with digestion. It also has strong anti-inflammatory properties.

Deepavali is not our new year (Only applicable for Hindu Indians. Incidentally, not every Indian is a Hindu. As with every race, we could be Muslims, Christians, Buddhists etc.)

While we very much appreciate the well-wishes, Deepavali is  not indicative of the transition to a New Year. Our New Year is actually dependent on the Hindu Calendar and is celebrately differently in the various parts of India. Typically, it falls around April each year.

And parents, please stop referring to Indians as ‘apu neh’ in front of your kids, because it is derogatory no matter what.

Featured image via Chronicles Of A Singaporean Indian Girl 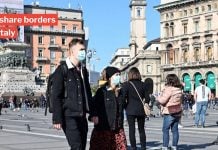 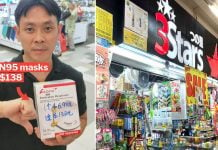