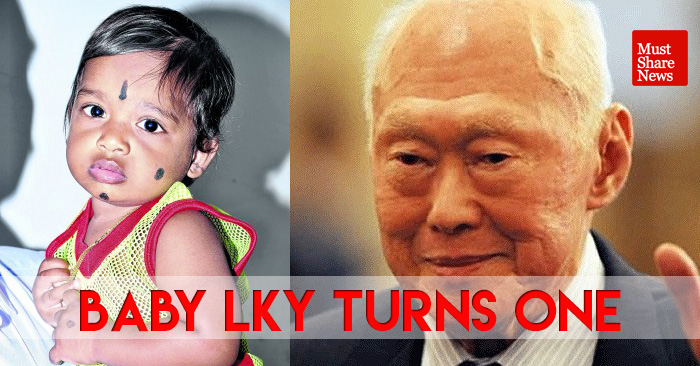 To many, yesterday (23 Mar) was the first death anniversary of our beloved founding father, Mr Lee Kuan Yew. People from all walks of life commemorated the occasion by paying tribute in the form of videos, portraits, art, flowers and more.

But to one family in the town of Mannargudi in southern Tamil Nadu state, it was also their son’s birthday.

He was born on 23 Mar last year at 1pm in Mannargudi, a town occupied by 70,000 people and has strong links to Singapore. His father Mr B. Jayaprakash, a bus driver, named the baby boy after our first Prime Minister, although he had never heard of LKY before his death. Nonetheless, he was moved by the “outpouring of grief” and he had to name his kid LKY.

Within Tamil Nadu towns, villagers have seen their lives improve tremendously, and credit the late Mr Lee for the positive changes. With the money sent back by their family members working in Singapore, they are able to enjoy TV sets, mini bungalows and cars.

The toddler is affectionately known as Lee by his family. He sports kohl-made black dots on his face, which is believed to ward off negative energy or the evil eye.

Lee is very active. It’s difficult to keep up. If he decides he wants something, he can’t be dissuaded. He is very stubborn. Otherwise, he is a calm baby and cries only when he is hungry.

Little Lee Kuan Yew is a mini celebrity in the area

Over the past year, little Lee has become a mini celebrity.

People call out ‘Lee, Lee’ when I am out and about in the town. I have come to be known as Lee’s father.

The child is “brilliant” and “sharp”

Mr Jayaprakash also describes his son as “brilliant” and “sharp”. The one-year-old can already drink from a metal sippy cup. The toddler is also rather tech-savvy, and has made his father’s handphone his favourite toy.

His father is saving 2,500 rupees from his salary monthly to pay for his son’s university education, and hopes that little Lee can get a well-paying white-collar job in future.

Featured image via Hardware Zone, Telegraph
With reference to The Straits Times