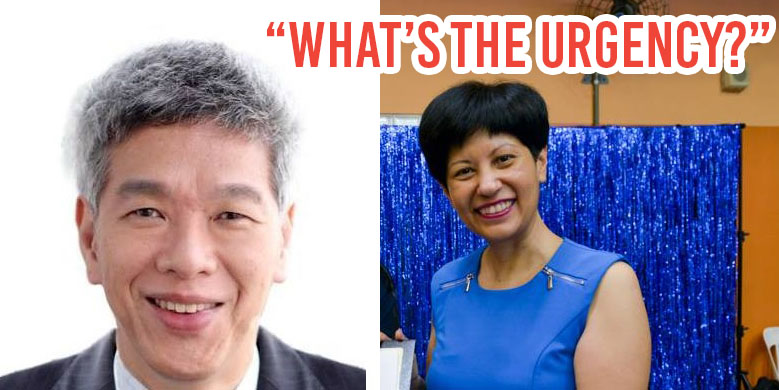 After writing 3 separate 4-point Facebook updates on 38 Oxley Road, Senior Minister of State for Law Indranee Rajah has discovered the pain of being ignored.  She has a very important questions for Lee Hsien Yang over the demolition of the house, but only finds non-answers.

And so, she does what any rational person would: pose the question again via everybody’s favourite social media — Facebook. She even remembered to set the visibility of the post to “Public”. Very internet savvy indeed.

Here’s the question: Why is the government being asked to decide (the fate of 38 Oxley Road) now? What is the urgency?

This is a result of a weekend-long tit-for-tat slinging of updates between the two. Let’s start at the start.

In the second list, she suggests that LKY only had “5 minutes to read and sign the 7th Will” and might not have enough time to fully understand it, and that he might not have known about the re-inclusion of the Demolition Clause.

In the third list, entitled 4 Financial Things You Should Know About the Oxley Dispute, Ms Indranee finally gets to a question.

As per LKY’s wishes, Dr Lee Wei Ling will be able to stay in the house for as long as she wishes, and any decision on the site will only take place in 20-30 years. Therefore, there’s no rush in making a decision now.

In response, LHY replied that he and his sister had “never asked the Government to allow us to demolish the house now, only after Wei Ling’s departure”.

He also accused LHL of influencing the committee that was formed to decide the fate of the house.

She said that LHY had insisted that the Government “commit itself immediately to demolishing the house”, despite the fact that Dr Lee could stay in the house for an indefinite amount of time. However, LHY had also himself alleged that he had only wanted to demolish the house after Dr Lee’s departure.

Thankfully, LWL has stepped up to help his brother out.

She insists that all the duo want is to honour their father’s final request, and have the house be demolished.

What could possibly be next in this saga?