Must Share News – Independent News For Singaporeans
Home Politics General Elections 7 Issues That Will Inevitably Be Debated In The Coming Singapore General... 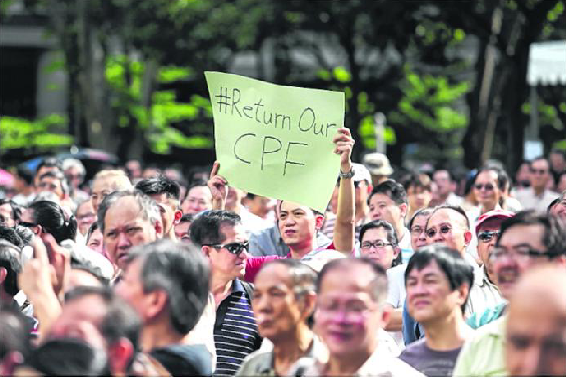 What Will Politicians Be Rallying About?

Last Sunday (21 June), the Singapore Democratic Party (SDP) outlined several issues that they intend to focus on in their rallies for coming General Election. The agenda, outlined at a forum marking SDP’s 35th anniversary, consists of the higher cost of living, immigration issues, and the Central Provident Fund (CPF) minimum sum.

Issues are outlined by political parties to provide them with a clear focus on what to rally and debate. These topics play an important role in General Elections by setting the subjects for debates and discussion, which will ultimately determine how the public votes.

MustShareNews spots 7 major issues that will inevitably be debated among the political parties vying for votes during the coming General Election.

The only foreign affair that matters to Singaporeans are the influx of foreign immigrants, largely because the GIF below is an accurate depiction of the average Singaporean’s peak hour MRT commute:

There is a common perception on the ground that the large influx of foreign immigrants is a source of problems for Singaporeans.

Social and economic issues such as rise in crimes, overcrowding of public transport, and the lack of jobs are generally blamed on the large influx of foreign immigrants.

In 2014, xenophobia came to a peak when the ruling party, the People’s Action Party (PAP), unveiled the population white paper plan for 6.9 million residents in Singapore by 2030, where half of the residents are expected to be foreigners.

There was backlash against the government for this plan. Several protests led by opposition figures were set up to challenge the government.

Today, there are still Singaporeans on the ground feeling angry at the PAP, the opposition parties will be happy to pounce on the issue of foreign immigrants to score points against the PAP.

In 2014, the Central Provident Fund (CPF) became a popular political topic of discussion after controversial claims made by Roy Ngerng.

Roy Ngerng is the sole writer and owner of a controversial anti-government blog, The Heart Truths.

In his controversial article, Roy accused Prime Minister Lee Hsien Loong of criminally misappropriating the CPF funds that by principle, belongs to Singaporeans.

His accusation was a direct attack to the integrity of PM Lee, who wasn’t pleased and sued Roy Ngerng for defamation.

Although the high court had ruled the case in PM Lee’s favour, the PAP government faced public backlash when Roy Ngerng managed to draw a considerable amount of support from Singaporeans.

Roy had appealed to Singaporeans to crowdfund his lawsuit battle against the Prime Minister. Much to PM Lee’s dismay, the crowdfunding attempt was more successful than expected, a total of SGD$81,000 was raised.

The CPF fiasco also resulted in protests, such as the Return Our CPF protests against government. These protests opened the floodgates of criticism towards the PAP government and spawned new opposing figures, incuding M Ravi and Han Hui Hui.

The CPF issue definitely has not come to an end, it will definitely be a major debate issue during the General Election.

Meanwhile, there are still scores of Singaporeans influenced by the protests who are still demanding the government to return CPF monies

Freedom of speech has always been a popular issue for the opposition parties to attack the ruling party with.

Singapore under the rule of the PAP does not have a good freedom of speech record, despite successes in other more quantitative areas.

In Februrary 2015, Singapore was given the worst ever freedom index score by the World Press Freedom Index, Singapore ranked 153 out of 180.

To put things in perspectives, Singapore is just 23 places away from North Korea — the isolated state that we love to make fun about.

The PAP has no lack of critics keen to attack the government’s abysmal track record at freedom of speech. They range from politicians, like Kenneth Jeyaretnam and Chee Soon Juan to bloggers, like Alex Au.

We can certainly expect this issue to be raised by the oppositions once again during the General Election.

With an annual salary of SGD$2.2 million, Lee Hsien Loong is the highest paid leader in the world.

At the 2011 General Election, the issue of ministerial salaries were furiously debated by candidates from all political parties.

To quell public discontent at the large sum of salary, the Parliament introduced a salary cut of 36% for the Prime Minister, 51% for the President and annual salary reduction to SGD$0.75 million for all Cabinet Ministers at 2012.

Even after the cuts, PM Lee remains the highest paid leader in the world.

There are still ongoing attempts to please the people, as the Prime Minister’s salary was further cut this year by 28% and the Parliament is reminding the public that ministerial salary have not increased in the last three years.

Ministerial salaries are often brought up in protests against the PAP government, and we can expect this issue to be revived again in the coming General Election.

The high cost of living for Singaporeans in recent years was highlighted as an issue that the SDP will focus in their rallies at the coming General Elections. Opposition parties use surveys such as the Economic Intelligence Unit, which ranks Singapore as the most expensive city to live in, to prove their argument.

In general, some people are not happy with the PAP-dominated government at the rising cost of living.

Comments like these are pretty common in local political forums; people are openly expressing their unhappiness with the government because of the rising cost of living.

Opposition parties such as the SDP will inevitably bring up the issue of  the high cost of living in Singapore as a focal point in their argument to attack the government.

At the previous election, the Workers’ Party rallied under the tagline of providing a “first world parliament” for the citizens of Singapore.

Low Thia Khiang, the Secretary General of the Workers’ Party argued that a considerable presence of opposition in the Parliament is required to provide a sense of check and balance on the ruling party.

He used an analogy of a co-driver to express his argument:

Bear in mind that just putting on a safety belt and hope that the driver will drive you to your destination is not enough. A co-driver is essential, especially as road gets tougher to navigate. The co-driver is there to slap the driver when he drives off course or when he falls asleep or drives dangerously.

This is what Low Thia Khiang probably had in mind. Reality, however, could not be more different.

The Workers’ Party and the People’s Action Party are more often engaged in skirmishes, than in cooperation.

4 years after securing Aljunied GRC, the Workers’ Party status as the co-driver will be an inevitable issue for discussion and debate when the time comes.

Another issue that the opposition will attempt drum up support in is the government’s refusal to introduce minimum wage for lower wage workers.

The government adopts the progressive wage model, suggesting that the minimum wage model is inflexible and overrated.

However, with pressure from the ground, the government may have cracked when they decided to implement a minimum wage of SGD$1,000 per month only for all cleaners last year (January 2014).

With the opposition set to continue their pursuit for the minimum wage model to fully implemented in Singapore, we can certainly expect the entire discussion on the minimum wage to be revived again in the coming General Election.

The issues mentioned will be the bigger issues that will matters.

Nonetheless, there will definitely be other smaller issues that will be discussed during the General Election, such as LGBT rights, the education system, or even questioning the qualification of their competitors.

Ye,t these smaller issues are minor topics, that will only swing a small group of voters. The real votes that will send political parties into the Parliament will be determined by the issues mentioned above.