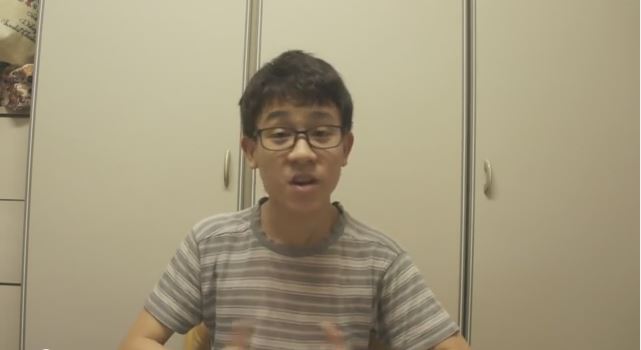 A look into our video-making Infamous Amos

The now-infamous Famous Amos is all but 17 years of age, and yet his videos have provoked more thought and discussion than any other local YouTuber has done in a while.

The video of Amos lambasting Lee Kuan Yew and making unfavourable comparisons between him and Jesus has turn the majority of Singapore against him. As if his words weren’t provocative enough, his faux-American accent and unkempt hair have somehow angered Singaporeans further.

But Amos Yee wasn’t always like this. His 12-year-old self also made the news for similar reasons, except at that time he was known simply as a child actor on Jack Neo’s movie We Not Stupid. Apparently he was already making YouTube videos back then.

One of these videos criticised Chinese New Year and landed him in hot soup with the public and his school as a result.

This incident, according to his blog, changed his outlook on Singapore.

Then of course I recall the incident which I think had some form of deep, psychological impact on me. The time where I was compelled to read out the most insincere, hypocritical ‘apology’ out loud to my fellow peers, that was written by teachers, for a video that should be more abhorred for its stupidity than for its supposed racism, that was absolutely non-existent.

I witnessed firsthand, things that were completely beyond my level of comprehension at that time, that was completely beyond my preconceptions of how a school worked,where rules of an official institution was dictated by the unreliable stupidity of the public, and where punishment was dictated not by logic, or by an understanding of a scenario, but because, a book says so.

That ‘apology’ given two years ago, and the subsequent deletion of my first Youtube account was not a sign that I knew my ‘mistakes’ and wanted to ‘change for the better’, it was a sign that other people effectively made me say so.

Never have I felt so much anger, unjust, and indignation for how things are, how people are and how it affected me and probably many others too.

Before that I was passive, soft-spoken and enjoyed the supposed goodness of the world. Never again would I be the same.

He pretty much says that having to read out an apology he never wanted to make only made him angry at the education system and Singapore in general.

This incident apparently led him to not apply for a school after his secondary school education ended (as can be seen in a video on his YouTube page) to pursue a video-making career.

To be honest, some of his videos are pretty funny. Check this one out:

This was made three years ago. Note that the video had zero vulgarities and displayed a more complex understanding of Singlish than 99% of Singaporeans.

There may have a variety of reasons for Amos to go from funny yet profound videos to the material which sparked a furor. And that CNY video incident is just one of them.

Why would a 17-year-old kid knowingly incite all that rage and mouth-frothing?

The best guess is that he wanted the attention. If his objective was to push everybody’s buttons and focus a country’s attentions on him, he wildly succeeded. Given his more logical, well thought-out videos received far less publicity, he probably figured that in order to attract the most attention, he had to insult the Dear Father of Singapore.

A normal person would have become fearful at the number of death threats and spam messages Amos Yee received. Not him. He knew he had succeeded in “going viral”. He may have even anticipated police action, because he called on Prime Minister Lee Hsien Loong to sue him.

Among the many comments from neitzens, one line stood out: the ones about how his parents had not brought him up properly.

How true is that, though? Amos Yee is a teenager, and which teenager does not dislike their parents?

According to a Chinese-language newspaper, his father is recently unemployed as of a month ago, and his mother is a teacher. Amos’s parents posted his $20,000 bail, so rumours of his mother filing a police report against Amos seems unfounded.

The only accusation that can be made on his parents is that they allowed him to flourish and be creative. Alas, he went a little too far in expressing his opinions.

The painting of Amos Yee as a sympathetic figure has emerged some days after the video caused the uproar. As with most cases, emotional knee-jerk responses will eventually give way to more measured analysis of behaviour. A substantial number of the public have chimed in with comments over how Amos is actually really well-spoken and makes some good points for his age.

There is a lot of fixation on his age.

Presumably, he just needs to be set on the right path and to contribute to Singapore’s future in a more conducive manner than raising public unrest. What Amos will grow up to become is anyone’s guess, but he definitely has some work to do, and a few more years to mature, before his destiny can be determined.

The irony of it all

Children are highly impressionable and learn from their environment far more quickly than adults do. It is possible that Amos’ exposure to the Internet may have instilled some radical ideas in him.

George Carlin, a comedian who frequently poked fun at politics and social issues in a brash and vulgar manner, is considered one of his influences. Carlin’s ability to be a mirror reflecting the inherent absurdity of the world was practically unrivaled.

The same situation unfolded in the video. Amos Yee highlighted Singaporeans’ fear of speaking out against the establishment because of Lee Kuan Yew.

The same Lee Kuan Yew, who in his lifetime sued several people and news outlets for doing the exact thing that Amos Yee highlighted in his video.

Very ironic, don’t you think? That’s some food for thought while you enjoy the freedom of eating your expensive meal and complaining about your work day.

Featured image via Amos Yee
With references from The Real Singapore, HardwareZone