Must Share News – Independent News For Singaporeans
Home Inspiration Humour An Infinity War Against Spoilers Is Raging On Social Media. Who Will... 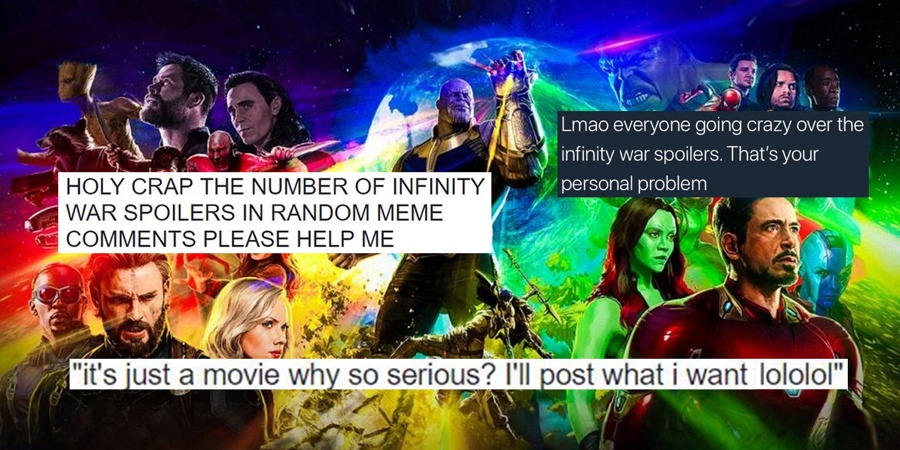 If you already know what’s gonna happen in the latest Avengers: Infinity War movie, 99.99% of the Marvel cosmos will have you know that they’d appreciate #nospoilers. Which brings us to the epic war raging on social media, as riled up Marvel fans discover that nowhere on the Internet is safe anymore.

Safe from spoilers, that is.

Worse still, some netizens seem none the wiser about why it’s essentially a crime to talk about the movie with friends who haven’t seen it.

We take a look at some of the best spoiler rants and irresponsible spoiler-y behaviour, that have ravaged our social media feeds.

There are two kinds of Singaporeans. Those who love spoilers, and those who simply rage at the very notion of them.

And then there are serial spoiler-sociopaths like this person.

As well as people who don’t seem to understand the gravity of the situation.

Even popular meme pages like SGAG’s comments sections became a minefield of spoilers for innocent readers.

SGAG even had to acknowledge that their comments section was down for the count, due to the presence of spoilers. Ironically, their meme was basically about the consequence of spoiling Avengers: Infinity War as well. 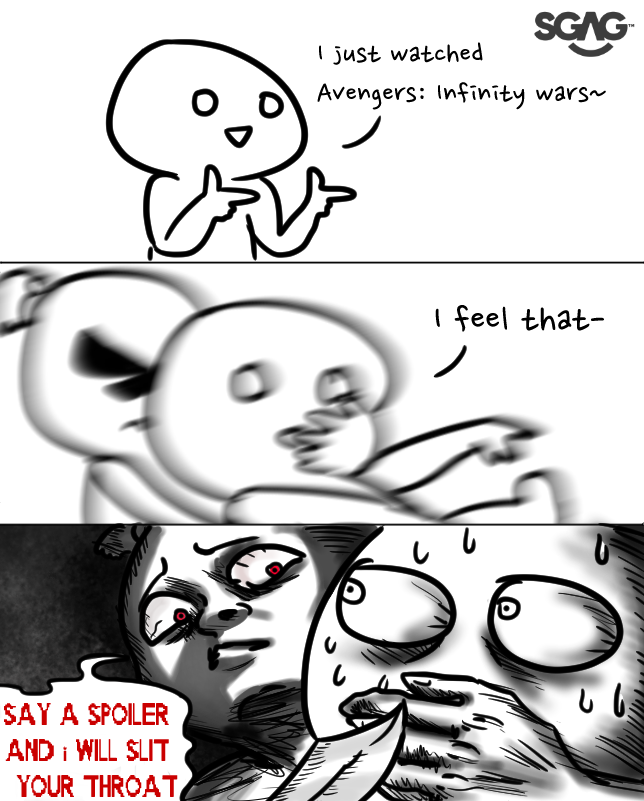 Do be warned that if you click the source link for that meme, you should tread carefully for you’ll be taken to spoiler ground directly.

A netizen posted this hilarious comment about his friends avoiding him like he’s “a serial killer”, as he’s already watched the movie alone.

We give him plus points for the pun, since Infinity War is the finale to a decade’s worth of 18 Marvel movies.

Some reserved stronger language to show their displeasure at those who used “spoilers for attention”.

And urged their friends and followers to remember that posting spoilers doesn’t “make you cool” on their Insta-stories. 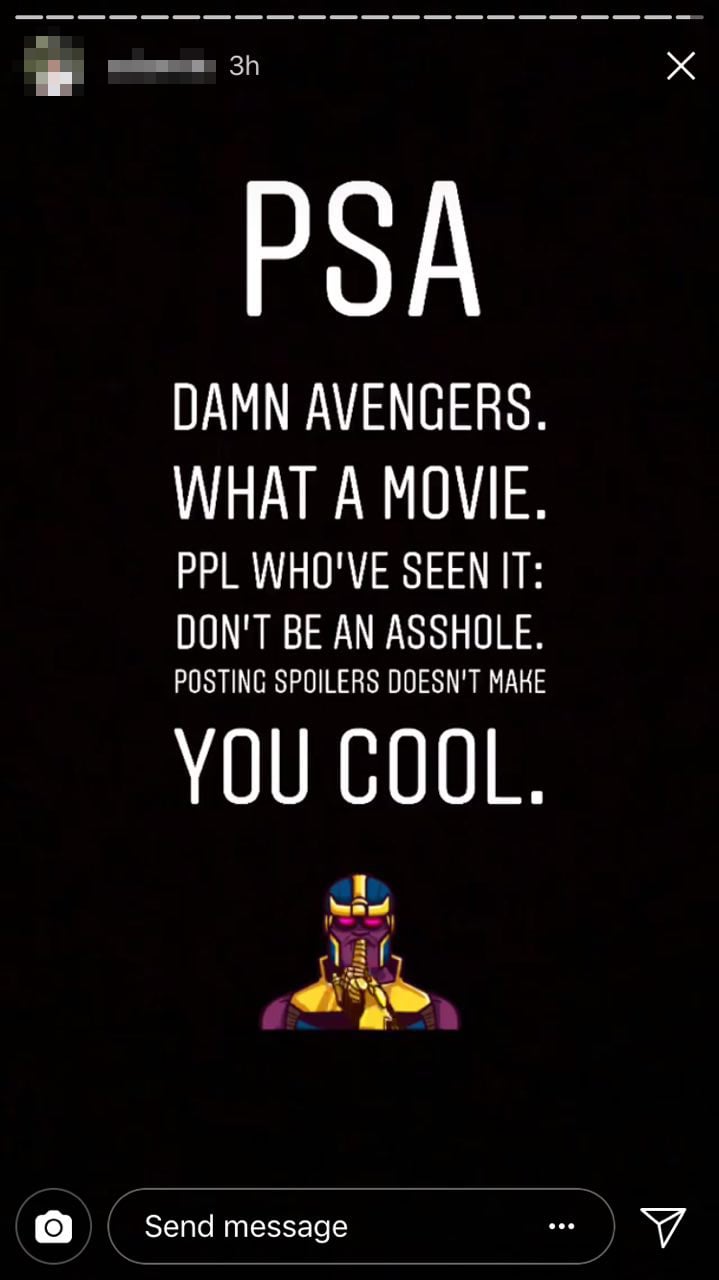 Not every spoiler is a good spoiler.

The Internet may be a landmine of Infinity War spoilers right now, but the quality of the spoilers also reflect the intentions behind them very clearly.

Here are some of the best we’ve uncovered.

Marvel die-hards know the consequence of pitting their superhero world against their biggest rival — the DC universe. 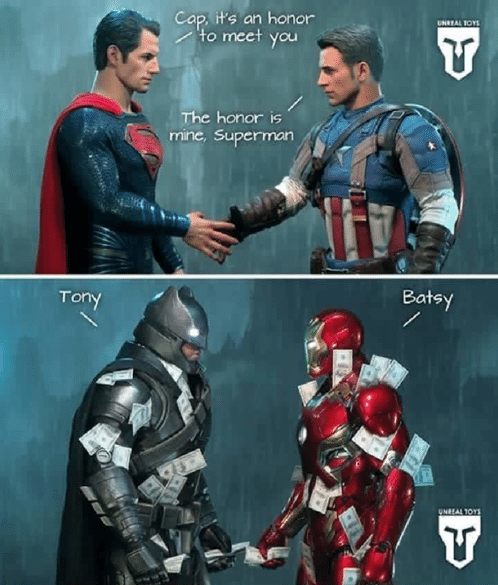 However, these tongue-in-cheek serial spoilers do sometimes get a bit out of hand.

Although the Teletubbies do seem to sport similar colours with the Infinity stones, we’re not too sure about this “SOOILER ALERT!!!” either.

The thrill of a good cinematic experience, largely comes from the element of surprise.

That’s why most people prefer to stroll into the cinema not knowing whether their favourite characters make it out alive.

Of course, a large number of netizens have taken to social media to post false spoilers regarding Infinity War character deaths. 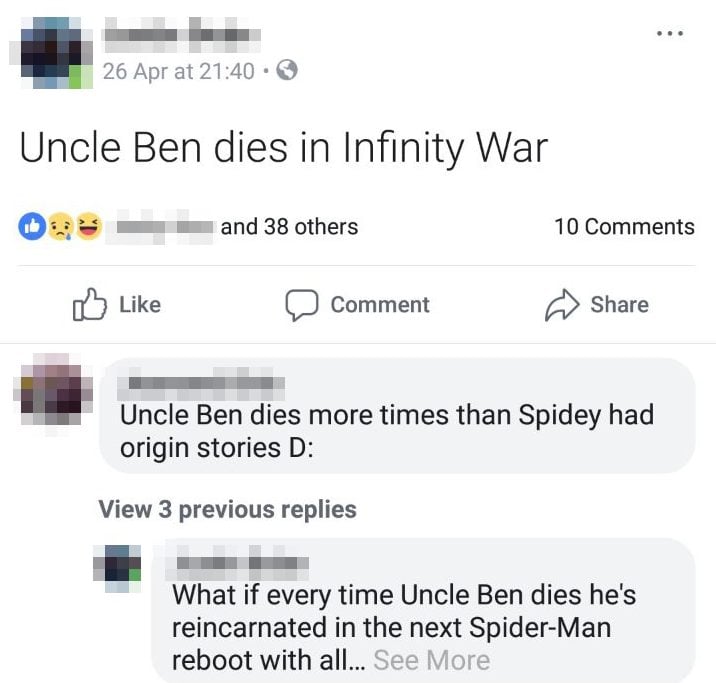 They range from humourous, to downright confused.

We also observed that there are many hilarious parodies of spoilers floating around too. 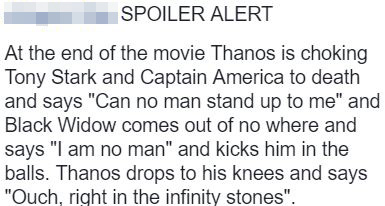 Cheekily labelled “SPOILER ALERT” in all caps, they’re probably written by fans who are fed up of being spoiled themselves.

Just like in Infinity War, a lot seems to be at stake in real life too.

Friendships have been sorely tested in reality, in Singapore’s all-out spoiler war.

Some Marvel fans apparently decided to unfollow, block or ban their friends who insisted on spoiling the movie on their feed. 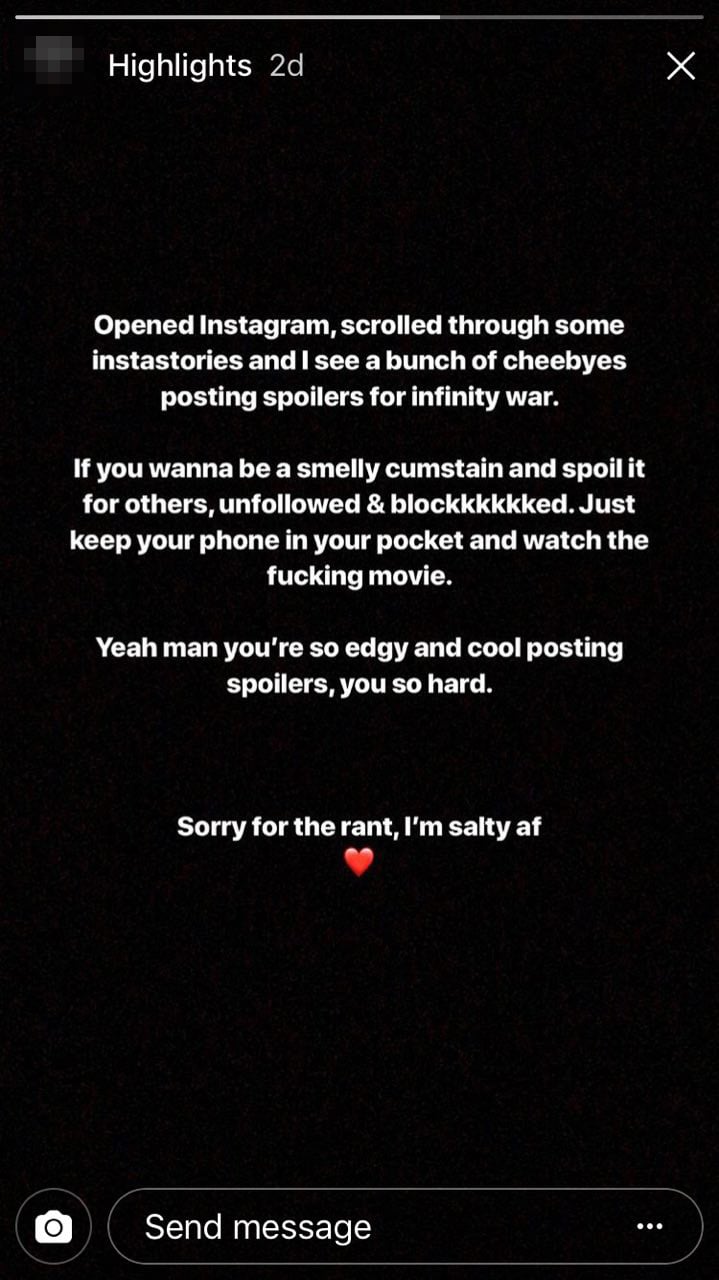 This netizen shared that he even lost followers due to his Insta-story spoiler rant. A user also called out the hypocrisy of those who didn’t wish to see spoilers, and yet spoiled the movie right after watching it.

As to how to combat spoilers, some had advice that was short and sweet:

Things are heating up

Whichever side you’re on, we hope Singaporeans remember that the Internet remains a place that could always use more unity.

After all, to defeat supervillain Thanos himself, the mighty Avengers have to work together to save the world once again.

So the next time you’re excited about sharing how amazing the movie was, spare a thought for your friends on your feed who haven’t seen it yet.

A simple “SPOILER ALERT” will suffice. 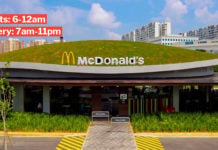 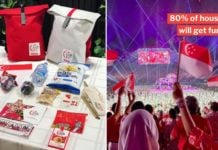