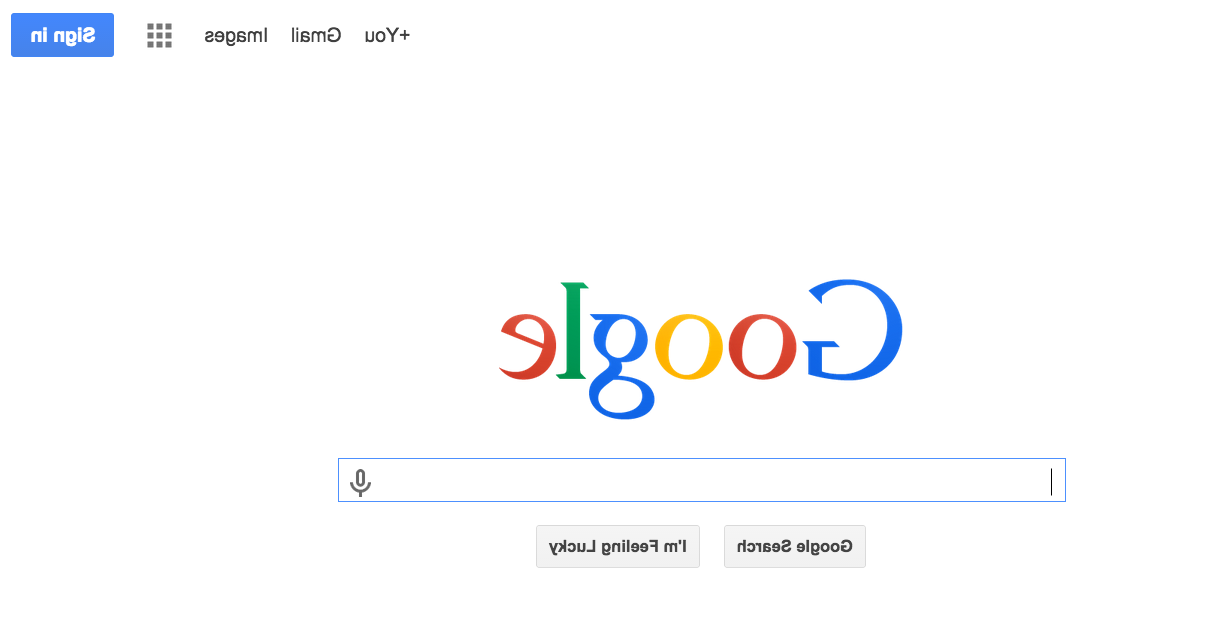 It’s the time of the year again

1 April is here. Watch out – you do not want to be that fool. On this day, jokes are posted all over the Internet – some are lame, some are funnier than the others, some backfired, some literally make you facepalm.

Here are some who have joined in the April Fools’ fun.

Don’t be surprised if your search results are all mirror words – that’s part of the fun! Head over to https://com.google/ for more! 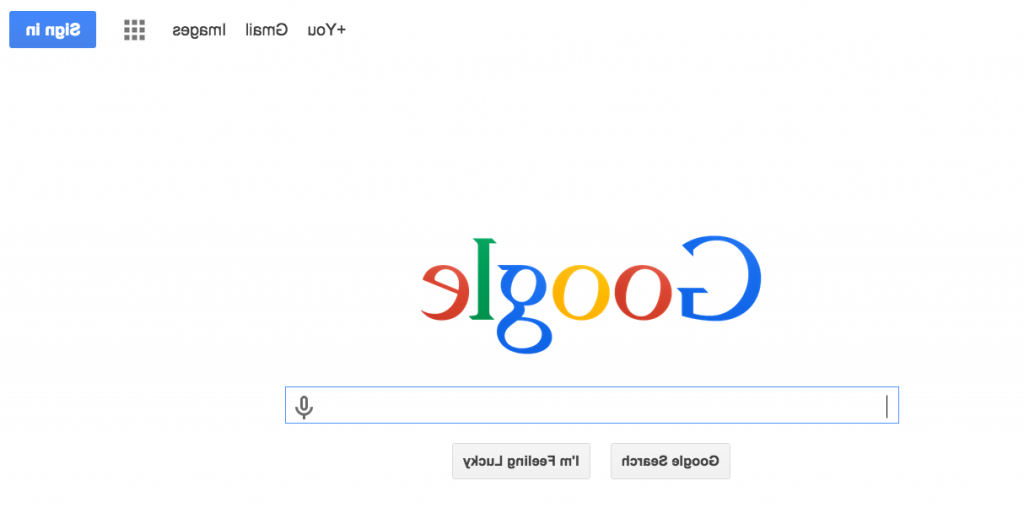 You can now play Pac-Man in Google Maps! Better still, play it through the streets of your residential area! Simply click on this link, choose a location and press the Pac-Man button at the bottom left of the screen.

Watch this video of Zalora pulling off their biggest prank yet here: 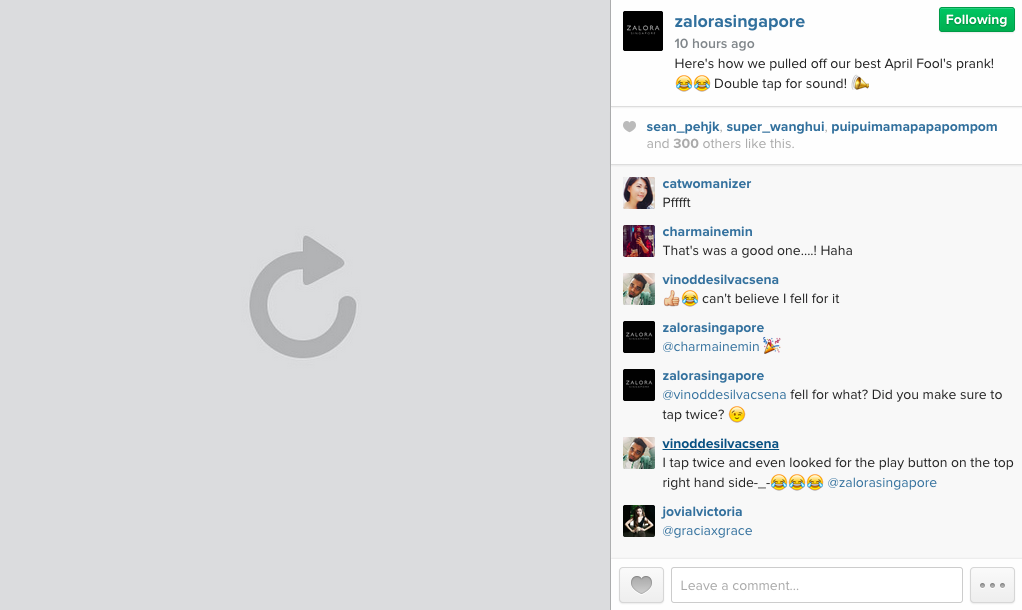 Doesn’t work? Try refreshing it multiple times. Our reporter got double tapped so many times…….

Groupon thinks dogs should take selfies too. Many concurred – check out the number of people who “bought” the deal. 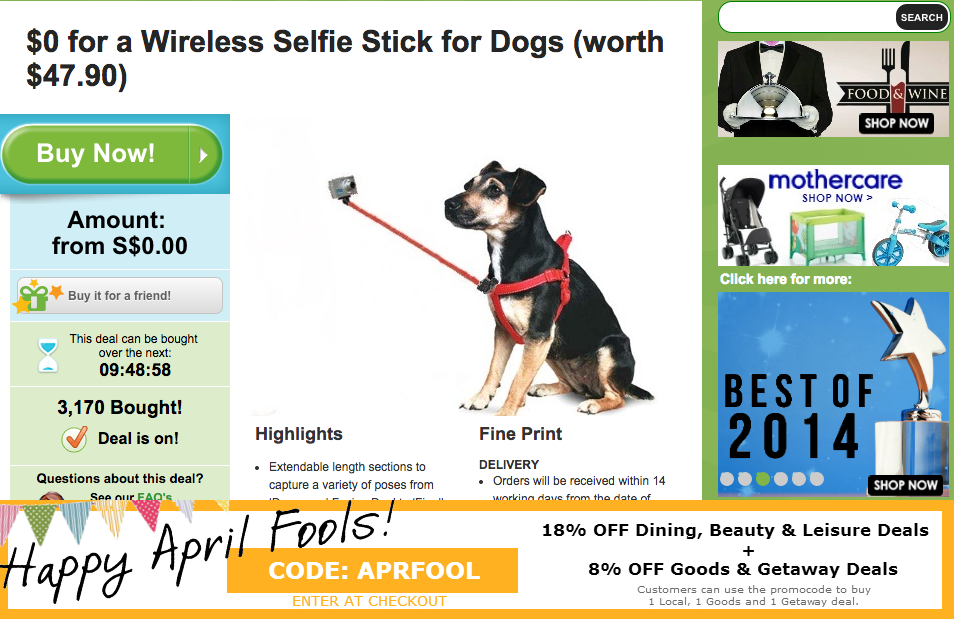 How does the idea of a combined shoe and speaker sound? Meet the Shoeker – by Spotify!

Get into our limited edition, Club on the Move Shoekers! Grab em quick before they dance out the door. #SpotifyGear pic.twitter.com/InFDoSE8wA

[UPDATE: You mean this wasn’t a joke??? The actual contest, in which participants stand to win a digital photo frame, has ended.]

Stop! Shop theft is a crime! Who says SPF doesn’t have a sense of humour?

Our favourite troll page with yet another troll post on April Fools’. Of course, this doesn’t stop netizens from wishing it was true and that SMRT Ltd (Feedback) would serve justice to Amos Yee:

Hailo introduced a new programme called the Hailo navigators two days before April! We fell for this one, unfortunately. 🙁

Students from NP would have been all too familiar with the killer slope. Yesterday (31 March), NP posted this:

We hear you! Over the years, we've had countless feedback from you about the trek from the bus stop to some of your classes due to the hilly nature of our campus – the steepest incline pictured. We're happy to announce that construction to flatten the campus will commence on the final quarter of 2015! Come the 3rd quarter of 2016, NP will be on flat, even terrain. #ngeeannpoly

Did you think we were really gonna give up our beloved Mt. Ngee Ann?! How else do you think we have legs day? Happy April Fools' to all! To those excited about the flattening, we apologize. Our internal shuttle buses run during campus peak hours, do use them to get around!‪ #ngeeannpoly‬

SP announced that One Direction’s Zayn Malik will be joining SP as a senior lecturer. Hmm… sounds pretty far-fetched to us!

This may be a 40-year-old joke, but many are still unaware that Dihydrogen Monoxide is actually… water. This prank backfired as some contacted Public Utilities Board (PUB) for clarification.

Possibly another April Fools’ – it is said that xinMSN has been disbanded, with Microsoft operating MSN as msn.com.sg while MediaCorp runs Toggle. We smell something fishy in here!

[UPDATE (2 April): Okay so we were overly suspicious… The closure of xinMSN is not a joke. R.I.P., xinMSN.) How many did you fall for? If you haven’t pulled a prank today, there’s a few more hours left for you to do so!