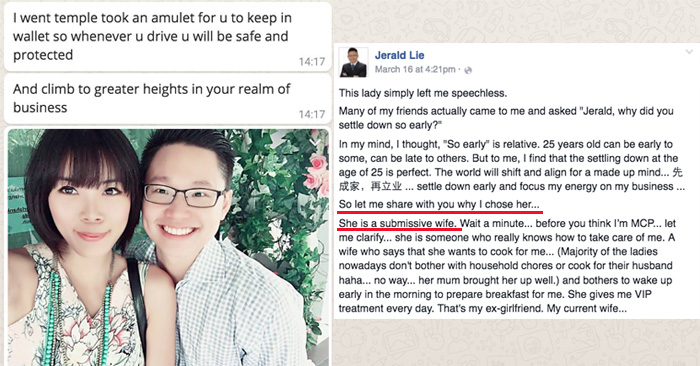 Most girls will feel that flutter in their hearts when they see a special shout-out to them on social media from their boyfriends or husbands.

In this 21st century, what’s wrong with letting the world know how great your love is via social media?

After all, love dedications can never go wrong — or so we thought until we came across this post.

“I chose her (because) she is a submissive wife”

Lie shared why he chose his wife in one of his Facebook posts, which went viral for all the wrong reasons and angered many Facebook users.

Women were especially offended by how he portrays submission as a character trait and how he objectifies his wife as a medium to bolster his ego.

Here is what Lie said about his wife:

In essence, he is just really happy that he married a  wife who will cook and clean for him and even submits to him.

Lie also added fuel to the fire by generalising that women do not like to cook or clean.

She is someone who really knows how to take care of me. A wife who says that she wants to cook for me… (Majority of the ladies nowadays don’t bother with household chores or cook for their husband haha… no way… her mum brought her up well.) and bothers to wake up early in the morning to prepare breakfast for me. She gives me VIP treatment every day.

Just because most women in his jarred perception do not bother with chores does not mean that they have a bad upbringing.

Also, what kind of dexterous skills do women possess in the kitchen that men do not have or cannot acquire?

Modern women today have career responsibilities on par or even more than men. Yet, they are also expected to put on the apron when they reach home while men are able to call it a day? Treating your loved one like royalty is not wrong, but at the same time, it does not mean it is an act of submission.

Of course the Internet could never let this go.

These comments pretty much sum up why everyone, especially women, got so riled up.

Of course, there are still people who agree with Lie.

At the end of the day, men want respect (which he gets when a woman submits), women want love (they want the man to do whatever to make her happy) … Give love and you shall receive respect…

First things first, both respect and love are integral to both man and woman in a relationship.

Also, respect is not gained by submission and love is definitely more than just mere actions a man does to make his woman happy, vice versa. 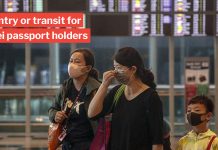 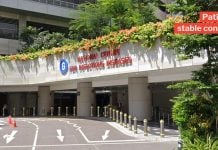