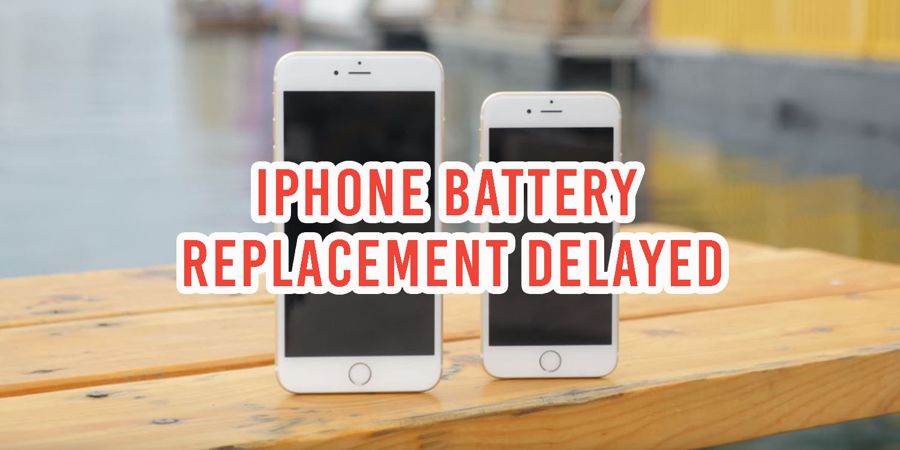 When someone says sorry and promises to make amends, they’d better deliver on those promises.

Apple, however, is struggling to make their sorry count.

If you recall, Apple apologised last December after being exposed for deliberately slowing down older iPhone models to prevent unexpected shutdowns.

As part of their apology, they offered discounted replacement batteries for iPhone 6 and earlier models.

However, Apple is now reportedly facing global delays in discounted battery replacements, due to short supply.

This means iPhone 6 Plus users worldwide looking to replace their batteries at discounted rates of S$38 may have to wait till late March to early April to get their phones fixed.

We’ve snooped around, and found that this may very likely affect local users here in Singapore as well.

Loyal iPhone fans accepted this with much cheer, and were ready to let bygones by bygones.

But this soon turned to outrage when they realised that Apple had underestimated the demand for these battery replacements.

Many iPhone 6 Plus and iPhone 6 users in the US were told that shipment for replacement batteries are backlogged until “late March or early April” or face a two-week delay respectively.

One user claimed that battery replacements for his unusable iPhone 6 Plus, would only arrive in April. 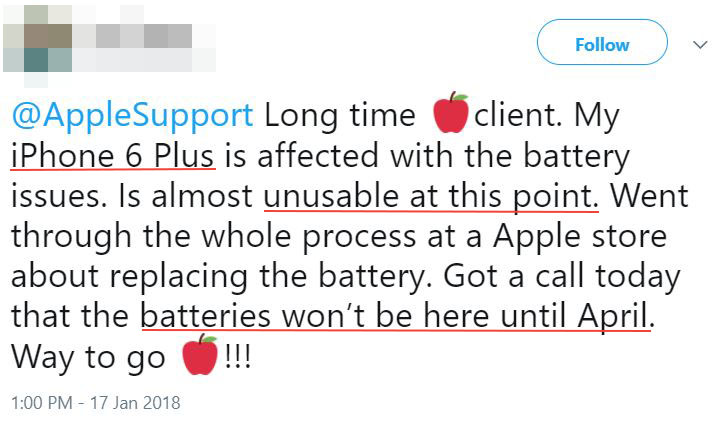 Another user said Apple emailed him that his battery had arrived, and then clarified in a call that iPhone 6 Plus batteries were now “back ordered until APRIL”.

This iPhone 6 user complained that he’d been waiting 2 whole weeks for his iPhone 6 battery fix, questioning if there was a supply problem.

Two CNBC reporters tried getting an iPhone 6 battery replaced as well, only to be told the same thing — a 2-week wait.

We went to the local online Apple support store to double check on this.

When you scroll down the generic iPhone repair page, you’ll be able to see this table on “Battery service”.

This tells you if your iPhone model is eligible for replacement at discounted rates. 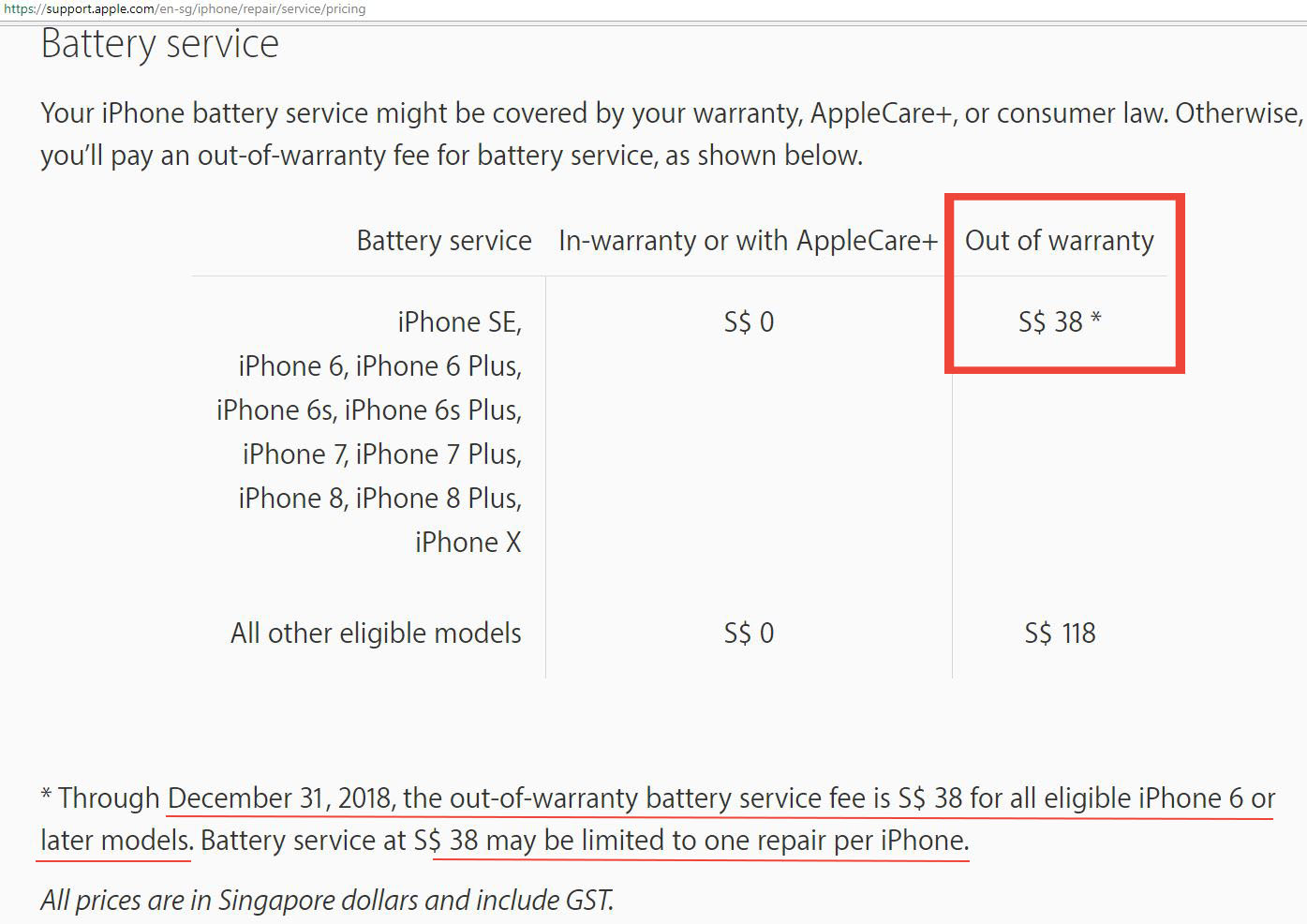 Thankfully, discounted battery replacement rates are available in Singapore as promised, via the ‘Start a battery service request” link.

Unfortunately, clicking through the link leads you to this disturbing message instead.

Supplies of replacement batteries are “currently limited for iPhone 6, iPhone 6 Plus and iPhone 6S Plus“, and Apple invites you to call Apple Support to first reserve a battery before your visit.

You can then choose from one of three ways to do so.

We personally tried the live chat session, but it gave us a wait time of 15 minutes and proceeded to hang our browsers.

A call with Apple Support was also not fruitful as we were told to leave our personal phone numbers, but Apple has yet to call us back at the time of writing. 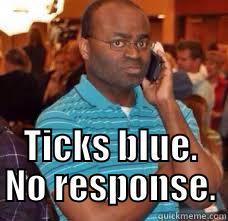 Long story short, we’re still waiting for a response from Apple on when we’ll be able to get a replacement battery.

Hope your iPhones can tahan till April

Apple clearly underestimated the demand when they released this discounted deal as an olive branch to inconvenienced users.

Then again, perhaps they shouldn’t have overpromised in their hasty bid to regain the trust of their loyal fans.

Most importantly, we can’t discount the fact that users faced this problem, because Apple decided to slowdown their phones to deal with battery degradation problems in the first place.

The good news is that it looks like batteries for other models, like iPhone 6s, iPhone 7 Plus and iPhone SE are still expected to be available “without extended delays”.

Since the deal for discounted batteries is valid till 31 Dec 2018, you’re probably better off trying to get your battery replaced later on in the year.

As for iPhone users whose phones cannot tahan till then, we’ll just have to wait for that fateful call from Apple. 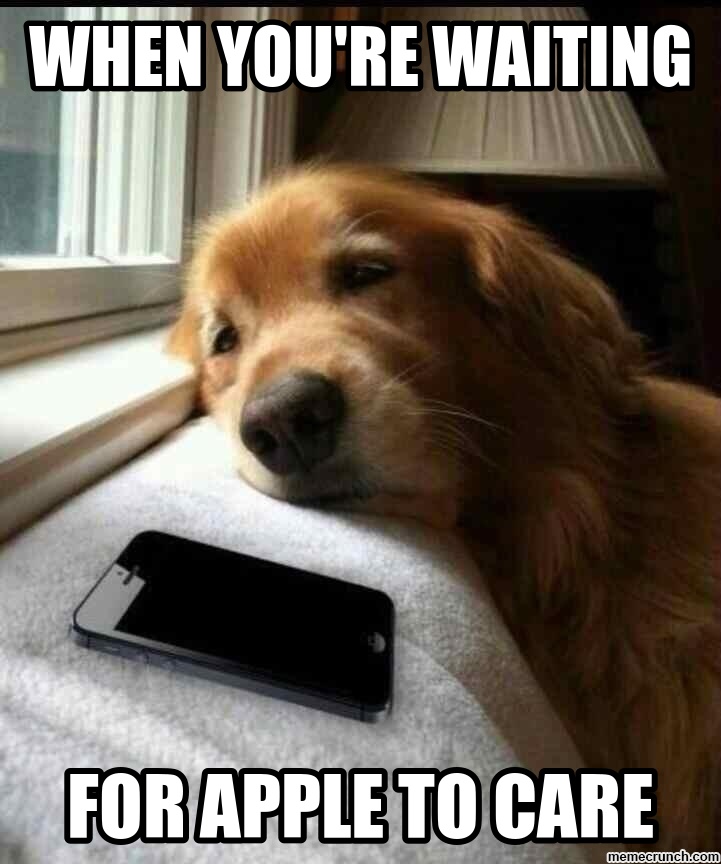