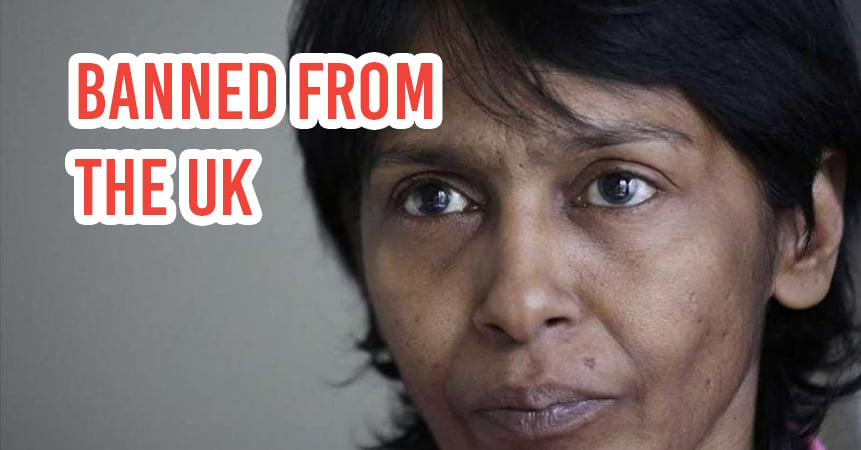 Imagine being kicked out of your home and forced to live thousands of kilometres away from your family just for having the wrong passport. Well, that’s the story of a Singaporean woman that has propelled her into the international spotlight.

Now, a crowdfunding campaign has been started to help her return to the United Kingdom, where her family is, and it has already raised £49,528 ($86,303) as of Wednesday (March 1). 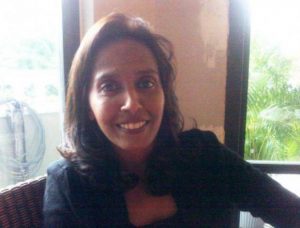 Living In The UK

Mrs Irene Clennell, 52, married Mr John Clennell in 1990 and the couple has 2 sons and a granddaughter.

Here’s a photo taken last year of the couple after finding out she was to be deported back to Singapore: 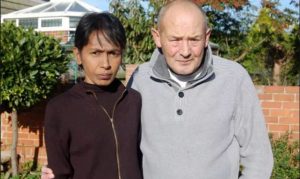 Separated From Her Family

But Mrs Clennell was forcibly deported from Britain by the UK authorities this week, separating her from her family. A 10-year travel ban to Britain was also imposed on her.

She had been held at Dungavel Immigration Removal Centre in Scotland since Jan 20.

According to Mrs Clannell, on Sunday (Feb 27) she was brought to a room “surrounded by officers from Dungavel and the UK Home Office” with 12 other detainees. They were told to call their solicitors but Mrs Clannell only had her lawyer’s office number, reported The Straits Times.

She was aiming to see a new lawyer on Monday, but believed her abrupt expulsion was planned for a Sunday so she wouldn’t get a chance to contact a lawyer.

She was deported to Singapore without prior warning. Her belongings were left in her UK home and all she had on her was £25 and the clothes she was wearing — she did not even get the chance to bid goodbye to her family.

Upon her arrival in Singapore, she was interviewed by The Straits Times.

Speaking with The Associated Press, Mrs Clannell revealed that the police treated her like a terrorist.

“I’m a tiny person and two of the officers were holding my hand, like I’m going to run away or something, like a terrorist. It was quite embarrassing.” she said.

She went a step further to expose how the British officials who escorted her on the flight promised to help her settle down in Singapore, but “everything changed” when they arrived in Singapore and the officers “turned their faces”.

After her marriage, Mrs Clannell was granted an Indefinite Leave to Remain (ILR) — allowing her to take up employment or study and stay in Britain without time restrictions. 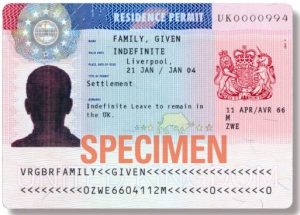 Unbeknownst to her, a clause in the ILR states that one cannot live outside Britain for more than two years.

Mrs Clennell broke the rule when she moved back to Singapore from 1992 to 1999 to care for her stricken parents. Her husband and 2 sons came to Singapore with her, but returned to Britain in 1998.

Her numerous applications for another ILR were all rejected.

However, it is possible for a person who previously held an ILR to restore their ILR and be readmitted to the UK. In the UK Immigration Rules, there are two paragraphs regarding former residents who are returning to live in the UK long-term:

(i) had indefinite leave to enter or remain in the United Kingdom when he last left; and

(ii) has not been away from the United Kingdom for more than 2 years; and

(iii) did not receive assistance from public funds towards the cost of leaving the United Kingdom; and

(iv) now seeks admission for the purpose of settlement.

Unfortunately for Mrs Clennell, she would fall afoul of paragraph 18(ii) as she was away from the UK for more than 2 years, and according to blogger LimPeh, wouldn’t be eligible under the “lived here for most of his life” condition in paragraph 19 either:

This article from the BBC appears to corroborate the allegation that Mrs Clennell had been in Singapore most of the time between 2005 and 2013.

In order to help her sister-in-law, Angela Clennell started a crowdfunding campaign on Feb 3, 2017. 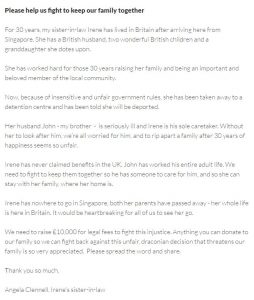 However, questions have been raised over this appeal with regards to Mrs Clennell having lived in the UK for 30 years — but no matter how many years she has actually been in the UK, the point is she is being separated from her family.

Mrs Clannell’s case has attracted the attention of the British press, with several British Members of Parliament (MP) urging the authorities to rethink their decision.

Netizens from across the globe have also given their two cents’ worth:

Despite all the uproar, The Straits Times reported that a Home Office spokesman said: “All applications for leave to remain in the UK are considered on their individual merits and in line with the immigration rules. We expect those with no legal right to remain in the country to leave.”

At the moment, Mrs Clannell is seeking refuge at her sister’s place but claims the situation is untenable.

She has vowed to fight against the decision and has no intention of staying in Singapore, as everything she has to live for is in Britain.

One can only imagine how traumatising it is to be deported suddenly, and the agony of being separated from one’s own family.

We sincerely hope Mrs Clannell and family pull through this gruelling period, and that they will be able to receive all the help they need to settle their problems.