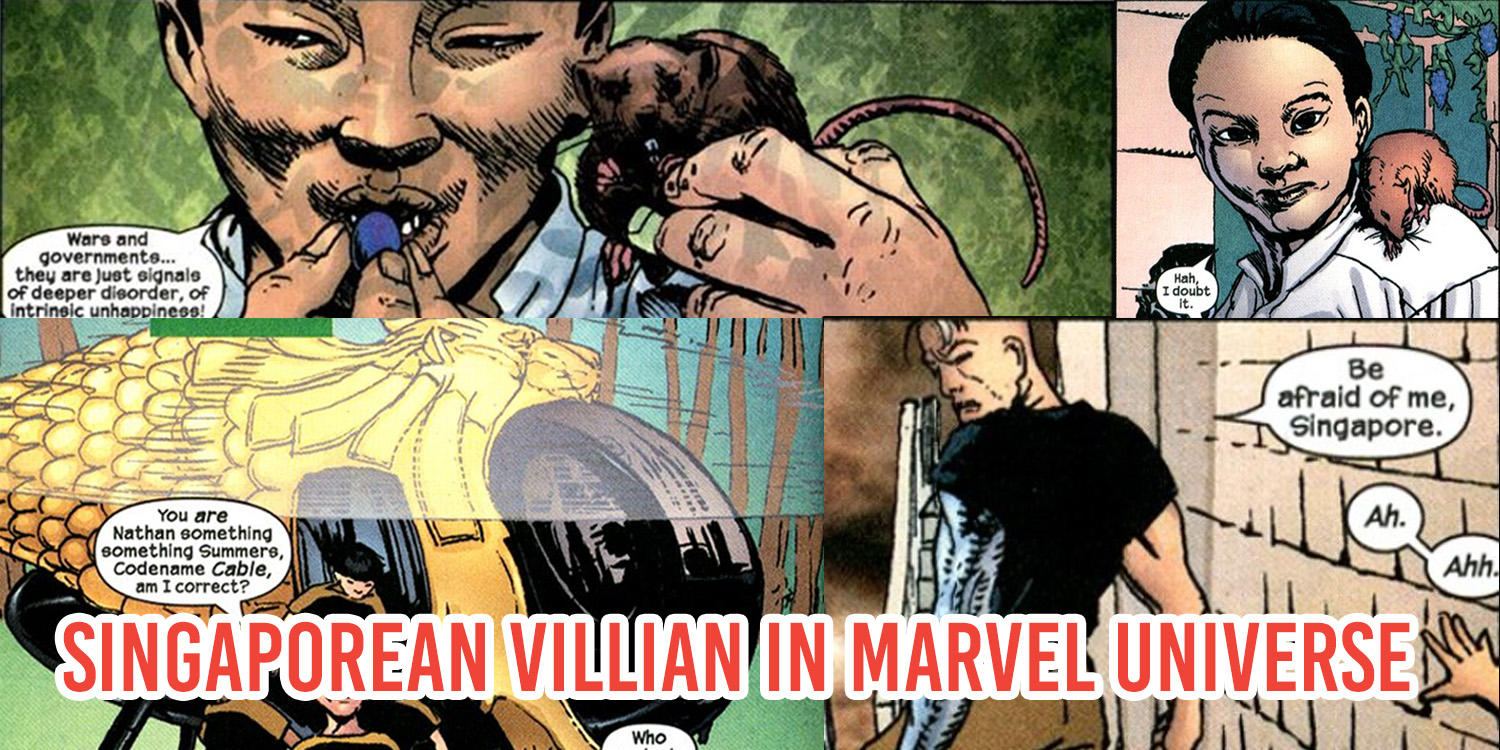 Marvel has no shortage of Asian characters.

Jubilee, Shang-Chi and Amadeus Cho are all heroes of the Asian persuasion.

However, Singapore has never had a caped crusader to call our own.

But we’ve got the next best thing — a one-issue throwaway villain.

It may be slightly disconcerting to stare into two pairs of beady rats’ eyes, but you’re looking at Jackie Singapore.

A man who’s said to be richer than Tony Stark and Bill Gates.

He appears in Cable #107, as an apparent crime boss who tries to recruit the titular character.

Here’s what we were able to glean about Jackie Singapore and his brief role in the Marvel Universe.

He has a small army of kids

Turns out, Jackie Singapore is a veritable Joseph Kony.

In Cable #107, he sends a death squad of kindergarteners to pick up the time-travelling hero.

Get this — they ride around in a gold-gilded Merlion helicopter. Is this where our CPF ended up in this universe?
Source

His best friend is a rodent

Jackie Singapore has a pet rat who runs around in a maze. 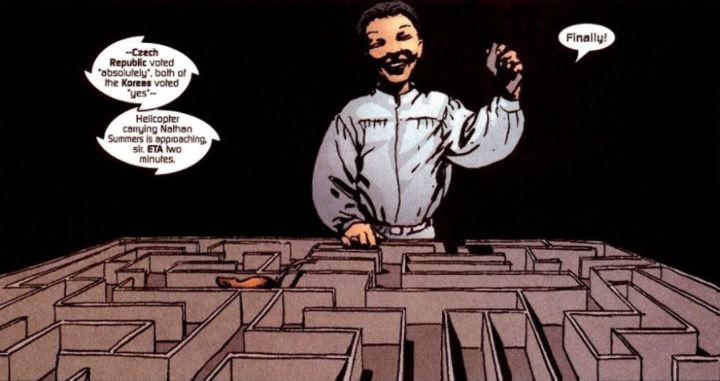 But not once is he depicted to be sitting in a swivel chair.

Way to drop the ball, Marvel. How else are we supposed to know that he’s a bad guy?!

Anyway, here he is making out with his rat. 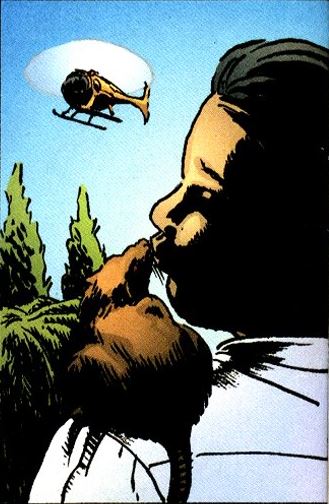 Speaking of which, here’s a look at the many Singaporean Easter eggs Marvel managed to cram into one panel.

The old HSBC Building, a pair of bridges (Anderson and Cavanagh) and a building sporting the DBS logo are all featured in the comic.

And if our eyes do not deceive us, there’s also what looks to be a colonial-era mansion on the roof of Mr Singapore’s building. 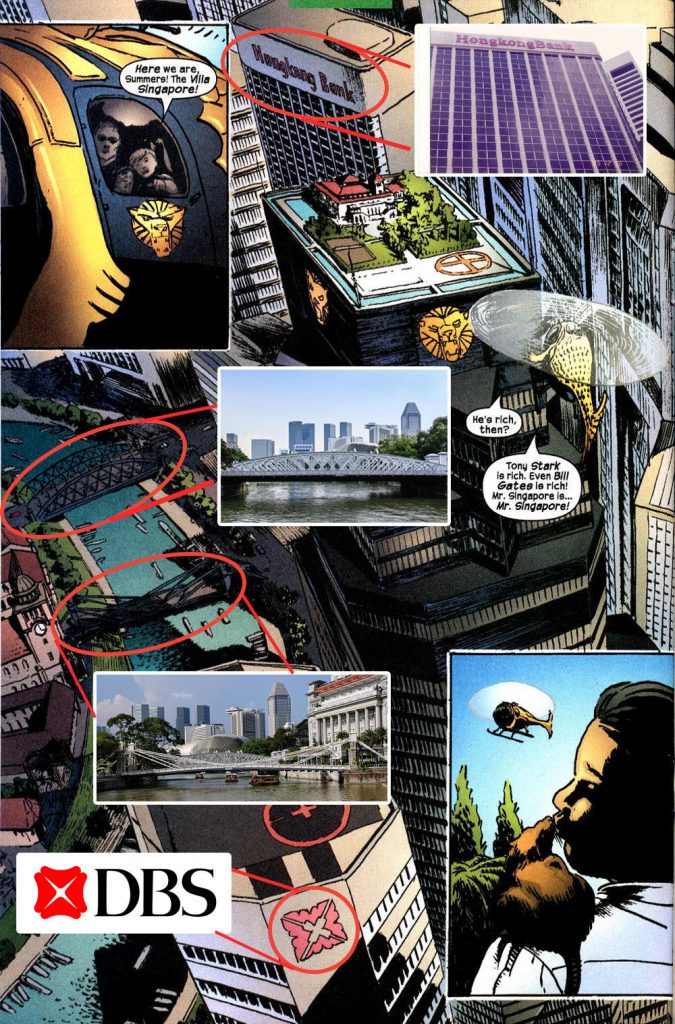 Step aside, Peter Lim and your unfairly gorgeous daughter — Merlioncopter-owners only.

Singapore is named after him

Mr Singapore’s influence is so large that he’s managed to convince 17% of Singaporeans that we named our country after him. 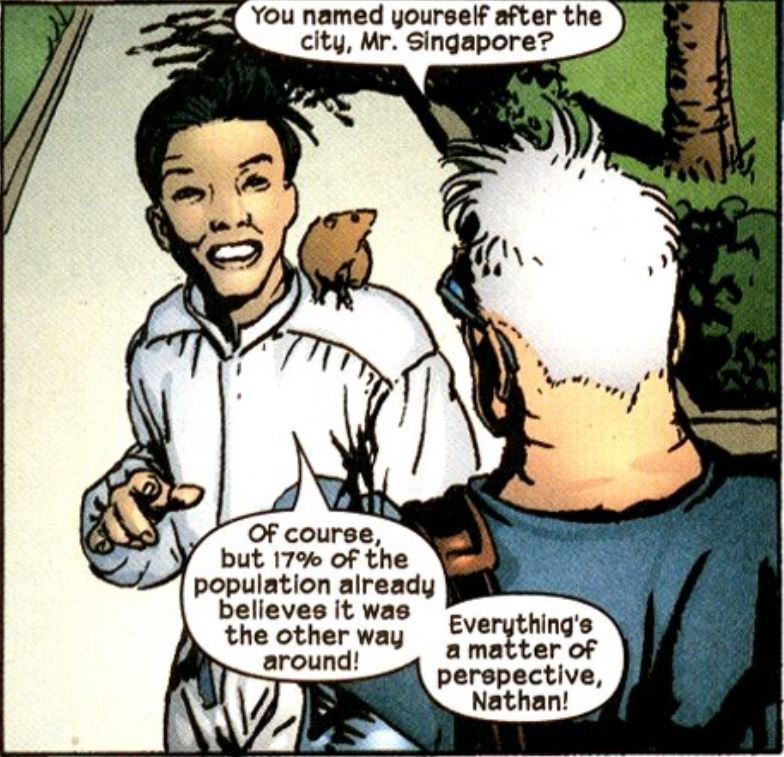 Perhaps it should have been 69.86%, seeing as he’s in an all-white ensemble?

Anyway, Marvel Singapore’s favourite son wishes to recruit Cable to his cause. 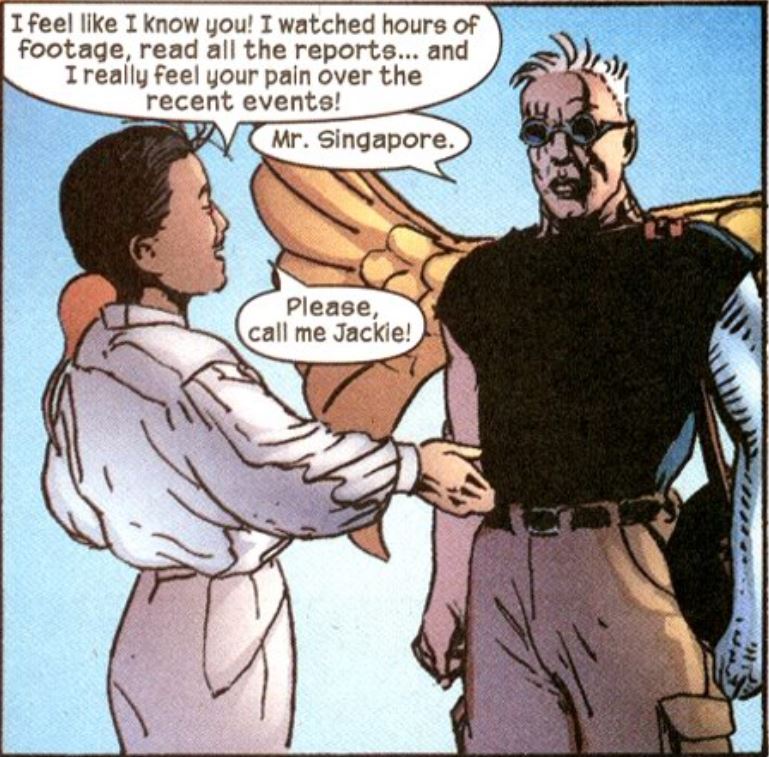 Claiming that the world’s an “organism” which is currently weak, he plans to introduce a “virus” in the form of “new ideas”.

All he needs is for Cable to be his “carrier”. 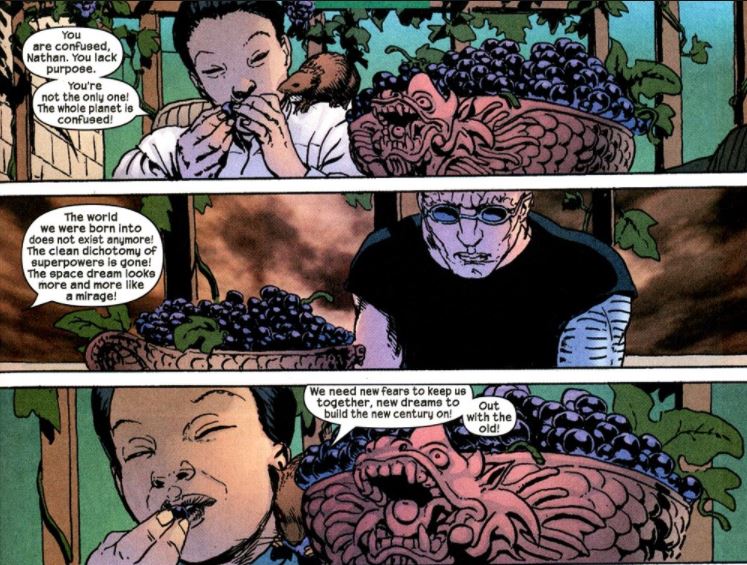 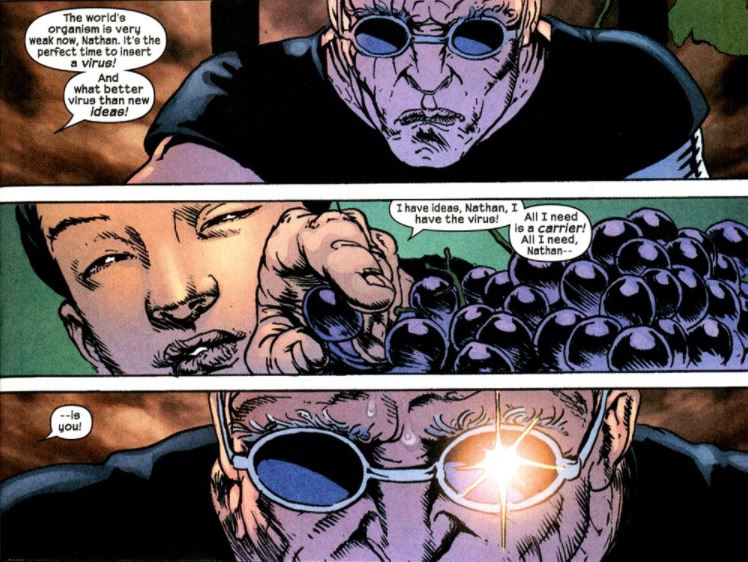 Sounds sinister and all, until Cable gets irritated and does the following: 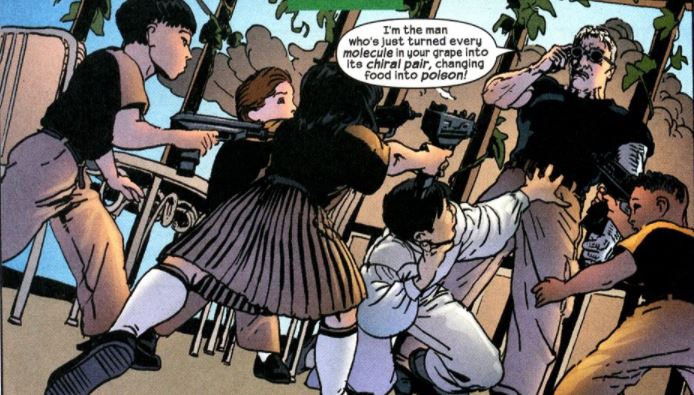 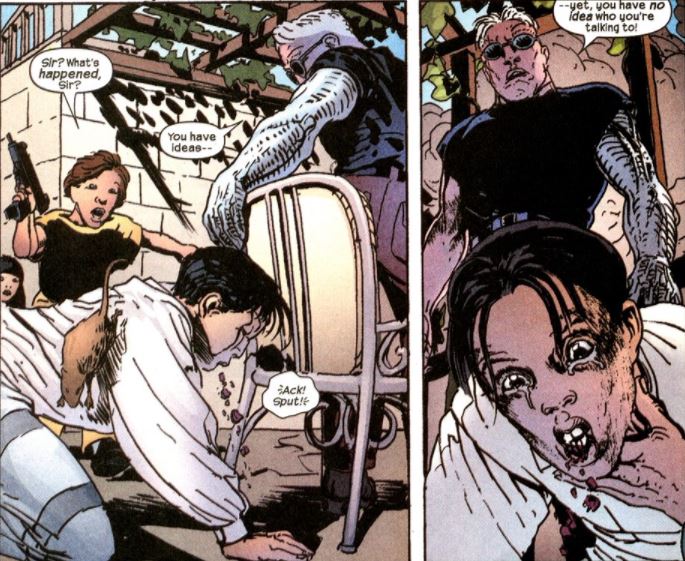 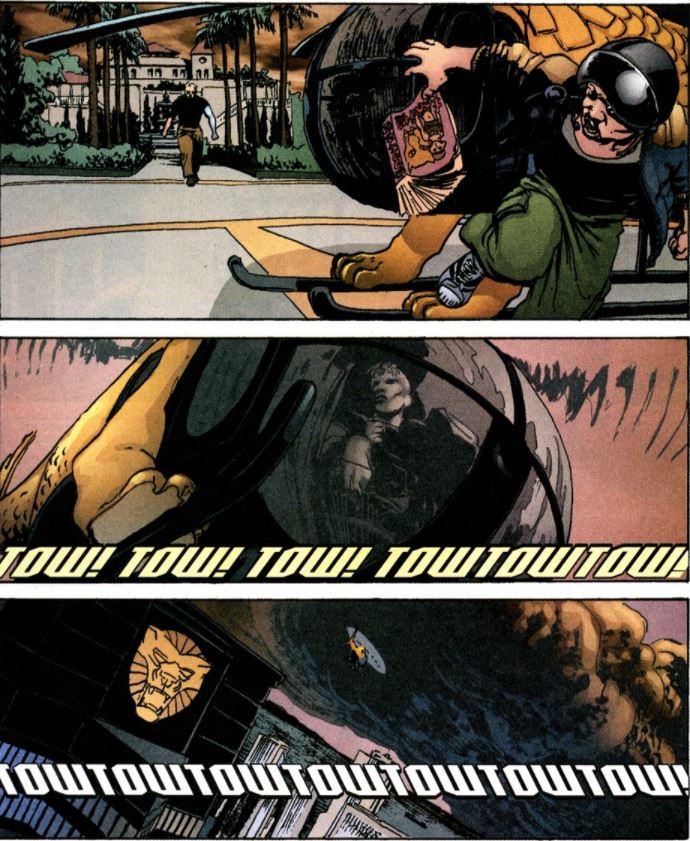 But a little poison never got anyone down.

Jackie gets back up after a recreating the Game of Thrones’ Purple Wedding scene and declares that everything is hunky-dory.

And then he was never heard of again

Cable flies off into a storm in an attempt to commit suicide and plunges unconscious into the Singapore Straits.

Somehow, he lives long enough to star in Deadpool 2, out in cinemas on 17 May this year.

Meanwhile, despite ominously claiming that “we shall be seeing Mister Summers soon”, Mr Singapore is never seen or heard of again in the comics. Our man got robbed. The bottom line? Don’t mess with the time-travelling mutant son of Cyclops, lest he choke you or poison you with grapes.

Then again, since Cable is starring in Deadpool, could that spell the return of Jackie Singapore someday?

A fanboy can hope.