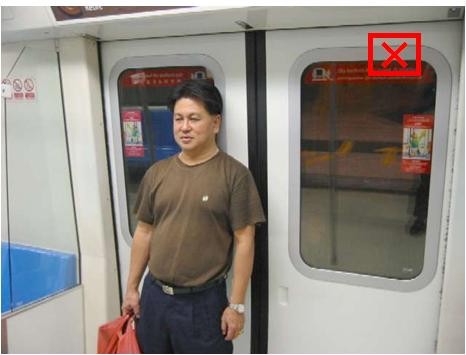 Yesterday (14 January), commuters on an SMRT train travelling East from Joo Koon to Dover were asked to empty the train at Chinese Garden station due to a door jam. The cause?

THREE PIECES OF JEWELLERY. To be exact, an earring and two beads.

These little terrors. David might just have used jewellery to defeat Goliath.

From the statement, it appears as though someone had been leaning on the area between the train doors and caught their jewellery on the gap, causing the door jam.

So here’s a public service announcement: Don’t lean against the train door.

Look, it’s stated right here on their website, and even blared over the train’s PA system, IN THREE DIFFERENT LANGUAGES, NO LESS:

We also have to wonder about how a few small pieces of jewellery can cause the doors to jam up, but we’re not train experts.

SMRT erred on the side of caution by getting everyone out of the faulty train and dispatching two other trains. Oddly enough, there were no tweets on the SMRT Twitter page informing commuters about the delays yesterday.

Some netizens commented on the crowds that formed on the platforms as a result, and many were late to school or work. Seems like the trend of queuing for trains isn’t going away anytime soon.

Friend at Clementi MRT station queued at least 25 minutes before squeezing into the 12th train this morning. Is rush hour always like this?

But, at least we can count our blessings that it wasn’t something else that caused the door jam…

(that wasn’t a real erection, in case you were wondering.)

Featured image via SMRT
With references via SMRT, Today Online