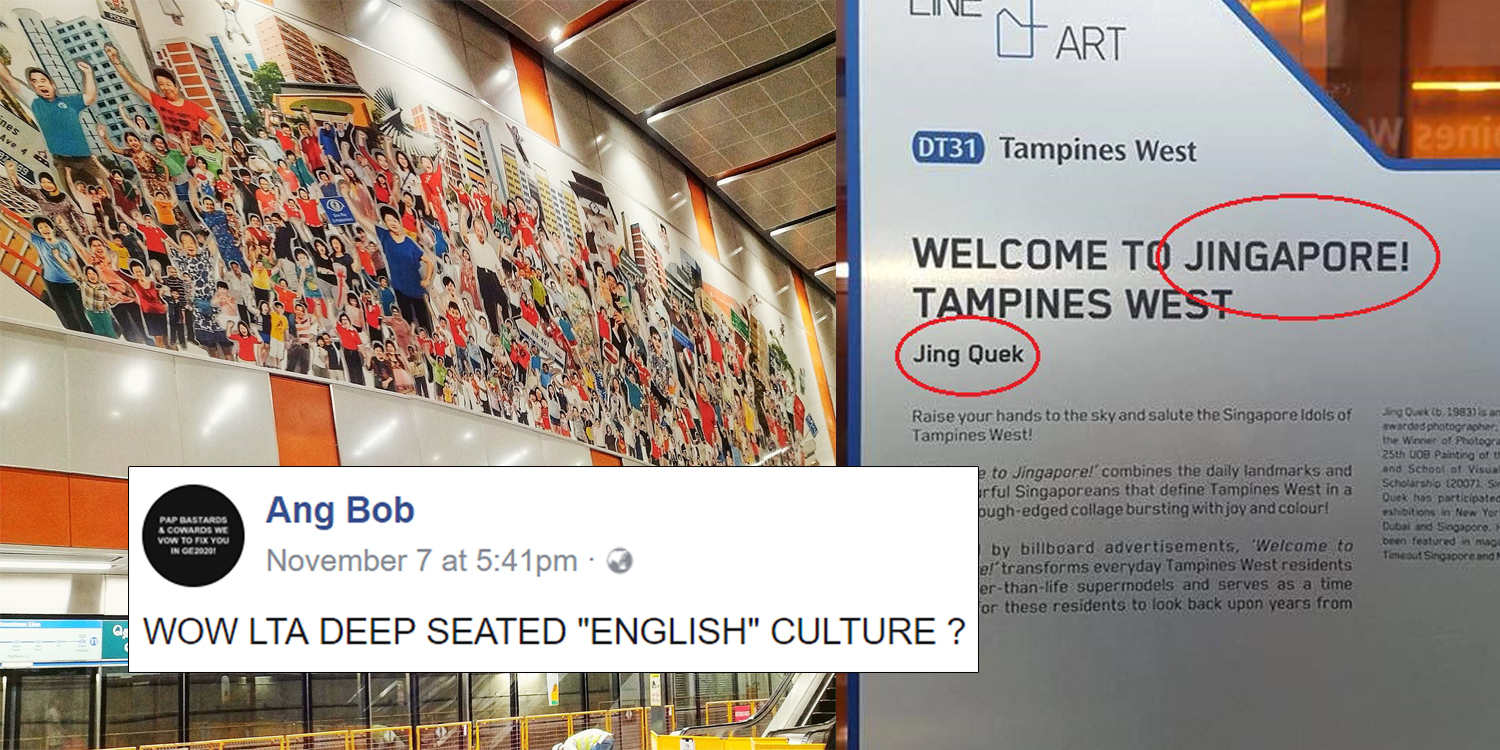 If you happen to stay in Tampines, and also rely on the Downtown Line for travelling, you may have recently noticed this at the stations: 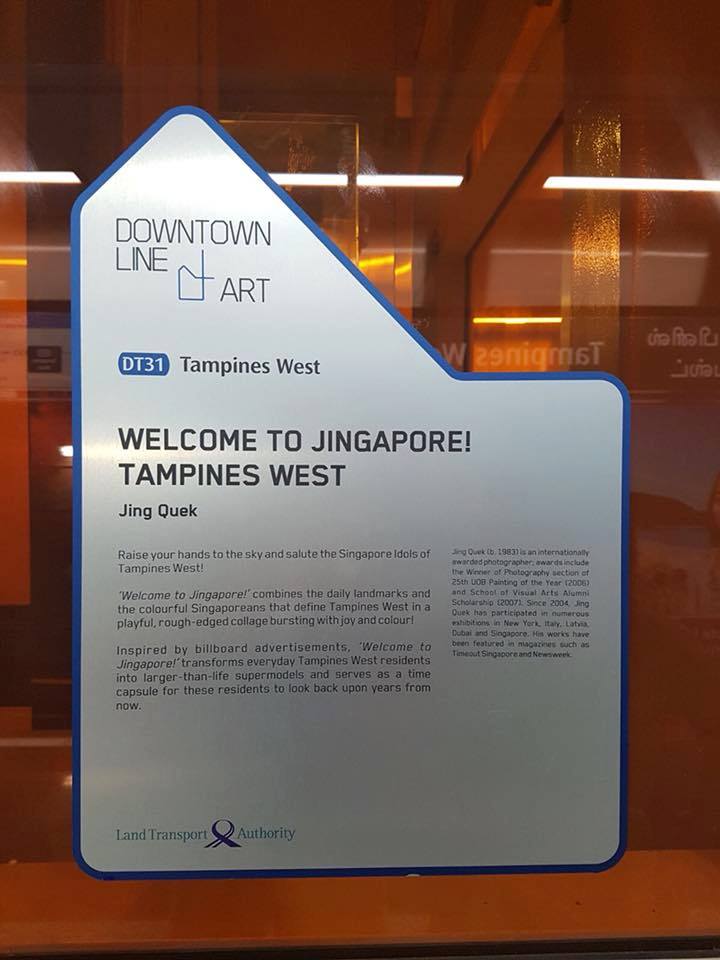 Before you react, you should know that no, that isn’t a misspelling of our country’s name.

It was intentionally spelt that way by the Land Transport Authorities (LTA) and local artist Jing Quek, as part of his Art in Transit work installed at both Tampines East and West’s stations.

But that certainly didn’t stop the Internet from getting upset and lashing out.

Featuring images of nearly 500 residents of Tampines and its nearby places and objects, “Welcome To Jingapore” is a wordplay on the artist’s name, Jing Quek and well, Singapore.

According to an LTA spokesman, the work was an attempt to portray Singapore though Mr Quek’s eyes. 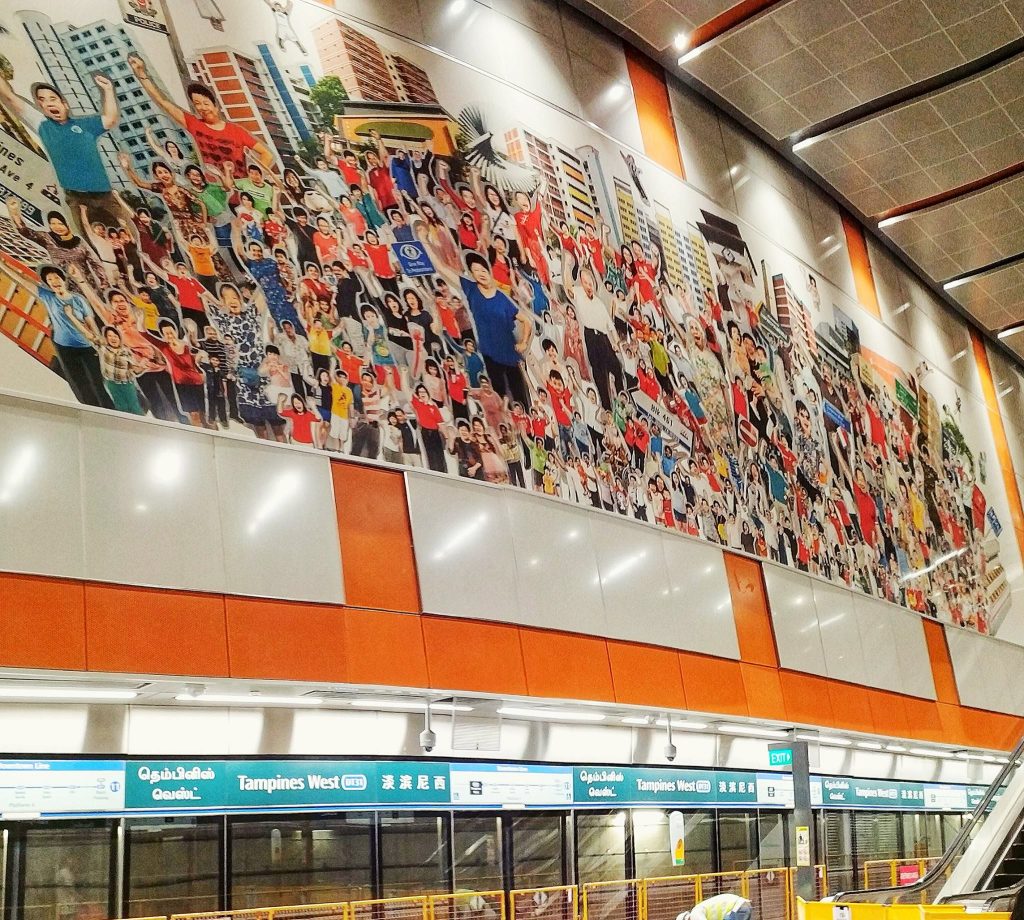 Jingapore is his artistic vision of Singapore where he hopes to capture contemporary Singaporean culture through art made by Singaporeans, and for Singaporeans.

Unfortunately, this didn’t sit too well with netizens.

Hell hath no fury like the Internet comments section

Commuters who first noticed the plaque initially thought that the LTA had made a spelling error during production.

This was when flak ensued, and netizens started criticising LTA for their supposed blunder. 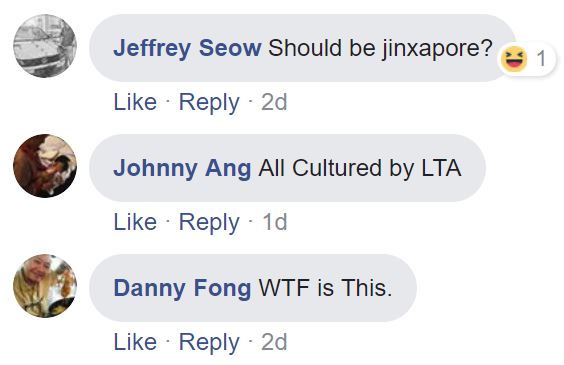 But this is all just a big misunderstanding, right? Once they realize that it was intentionally done in the name of art, surely they’d see the error of their ways and appreciate it?

Many disagreed with Mr Quek’s decision to include his initials on a national project — claiming that he was using it for his own benefits.

Some even felt it was disrespectful to the country and accused him of stroking his own ego.

We’ll just stop here with the negative comments, pretty sure you get the point by now.

If you really want to see more, you can google Jingapore for yourself.

Who knew that a piece of art would rile up so many people and kick up such a fuss?

So much so that Mr Quek himself ended up receiving calls from the media — which led to him clarifying his work and providing some context on his Facebook.

Where he basically explained that Jingapore involved the complex and advanced technique of English linguistics, known as a pun.

But in all seriousness, he talked about how honoured he was to have been given the opportunity to create Art in Transit and was grateful for the contributions by the Tampines residents who spent their time and energy bringing it to life.

He also urged Singaporeans not too get too worked up over the art piece, and also to spread more positivity online instead.

In fact, the term Jingapore was actually used by Mr Quek before.

How come last time no one say anything?

Jingapore suddenly doesn’t seem so bad now that you know the story behind it, does it?

What do you think of this? A bold move by LTA or an unnecessary and disrespectful act towards our country?

Let us know what you think! 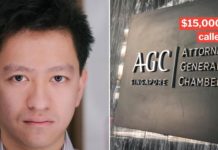