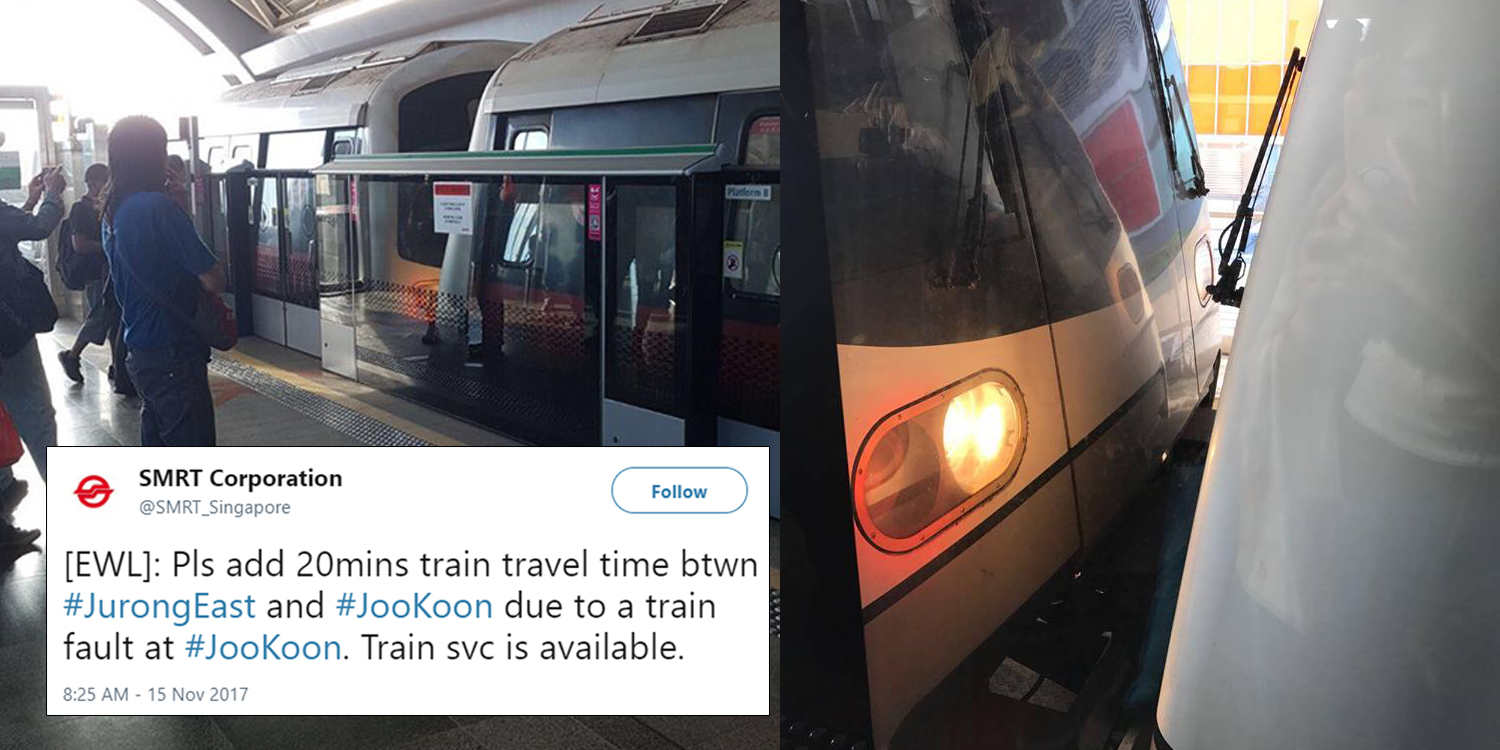 Things just seem to keep getting worse for SMRT.

After the infamous tunnel flooding incident on 7 Oct, Transport Minister Khaw Boon Wan had urged transport workers to let it be the turning point for SMRT to make train services reliable again.

However, on Wednesday (15 Nov), not only did commuters face two separate train faults – during the morning rush hour nonetheless – on the Circle and East-West Line, a train collision allegedly occurred at Joo Koon MRT Station as well.

Which actually resulted in injuries being sustained by commuters on board.

Some of them were so severe that they had to be sent to hospitals.

SCDF alerted to the collision

At 8.33am, the Singapore Civil Defence Force (SCDF) stated that they were alerted to an incident at Joo Koon MRT Station.

They revealed that a majority of the commuters on board had sustained minor injuries, while 23 were injured and promptly sent to hospitals for further treatment.

UPDATE: LTA has confirmed that 29 people were injured.

Facebook user Mei Anne – who was on board when it happened –  took to Facebook to express her frustrations.

She mentioned that the collision caused her to fall and hurt her back.

Thankfully though, it doesn’t seem that she sustained any serious injuries.

However, it seems that she has since removed all pictures of the incident on her account.

With photographs of the collision becoming increasingly widespread on the Internet.

One passenger even managed to record what the situation was like inside the train following the incident.

How was the collision possible?

Following the collision, the platform at Joo Koon has been partially cordoned off to members of the public.

Check out a video of SCDF personnel closing off the platform by Channel NewsAsia:

The only question now is, how was it possible for a driver-operated train to collide with another even in times of a disruption?

Furthermore, why did SMRT’s official Twitter only report the incident as a “train fault”?

[EWL]: Pls add 20mins train travel time btwn #JurongEast and #JooKoon due to a train fault at #JooKoon. Train svc is available.

Couldn’t they have just admitted that a collision occurred?

Well, they kinda did, with this joint statement by LTA and SMRT shedding more light on the incident.

However, note the conspicuous lack of the word “collision”. Instead, the more ambiguous words “came into contact” were preferred.

We here at MustShareNews will keep you updated once more information from this developing story is revealed.

In the meanwhile, we wish those affected a speedy recovery.