Must Share News – Independent News For Singaporeans
Home News 5 MMA Techniques Taught By Paedophile Josh Robinson That Could Be Used...

Disclaimer: This article is satire, don’t be triggered. Nobody is trying to “slut shame” or assign responsibility to the victims.  The fault lies with Josh Robinson and Josh Robinson alone. We are pointing the irony of Josh Robinson making video tutorials teaching people how to fend off sexual predators. If anything, this satirical piece aims to raise awareness for his crimes and the lenient jail sentence.

Josh Robinson is a very bad man. The American mixed-martial arts (MMA) instructor was jailed for 4 years on Thursday (March 2) on NINE charges. 3 of them were for sexually assaulting two 15-year-old girls, reported Channel NewsAsia.

Prosecutors during his trial called him a “sexual predator” who “groomed and morally corrupted his young victims” and “coaxed them into having sex with him”.

Josh Robinson had said he had a fetish for young girls in uniform, The New Paper reported a prosecutor as saying. “He told her ‘I have wanted to find as young as possible. I think 13 would be ultimate. But 15 is youngest’,” the prosecutor added. 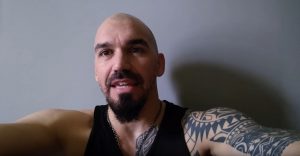 The sleazebag even showed a 6-year-old girl a video of an explicit sex act, while he was on bail.

Josh Robinson obviously loves film — he used to be lead artist at LucasFilm in Singapore, and worked on digital assets for the Clone Wars series, according to a resume on his blog. He also worked at visual effects company Double Negative.

His love for video extends to his MMA career too — he uploads MMA video tutorials on his website and YouTube channel.

Despite Josh Robinson being a paedophile and sexual predator, we think his MMA video tutorials are useful for teaching people how to protect themselves — ironically, against people like him.

Those watching the videos for self-defence tips should put themselves in the place of Josh Robinson (icky as that sounds) and note that the other guy in the video is playing the part of Josh Robinson.

1. How To Hold Down A Larger Opponent

One of the 15-year-old girls assaulted by Josh Robinson said she did not dare to resist him as he was “tall and muscular”.

This is what Josh Robinson recommends against larger opponents:

2. Bring Down Someone Standing Over You

If you’re down on the ground and Josh Robinson is standing over you, about to pounce, here’s a way you could bring him down too:

3. Escape From Someone Who’s On Top Of You

If your assailant has managed to get on top of you, it’s not over yet.

Here, Josh Robinson teaches you how to get away from him if he manages to get that position:

4. Take Him Down Before He Takes You Down

What to do if Josh Robinson has you by the waist, and is trying to bring you down?

Well Josh Robinson shows you how to take him down first, and then put him in a chokehold:

5. Get Out Of A Chokehold

Josh Robinson has you in a triangle chokehold (i.e. your neck and arm are encircled by his legs), and things are looking dire.

Fear not, as Josh Robinson teaches you how to get away from him, and even turn the tables by making him submit:

We wish his poor victims would have learnt a thing or two about self-defence. We also sympathise with the trauma they have suffered.

However, it’s not too late. Whether you’re a guy or girl, it’s always handy to learn a few moves, and take it from the master himself — we’re sure his MMA skills will stand him in good stead as he tries to fend off attacks from his fellow inmates in jail.

But this time, we won’t have any sympathy for him.