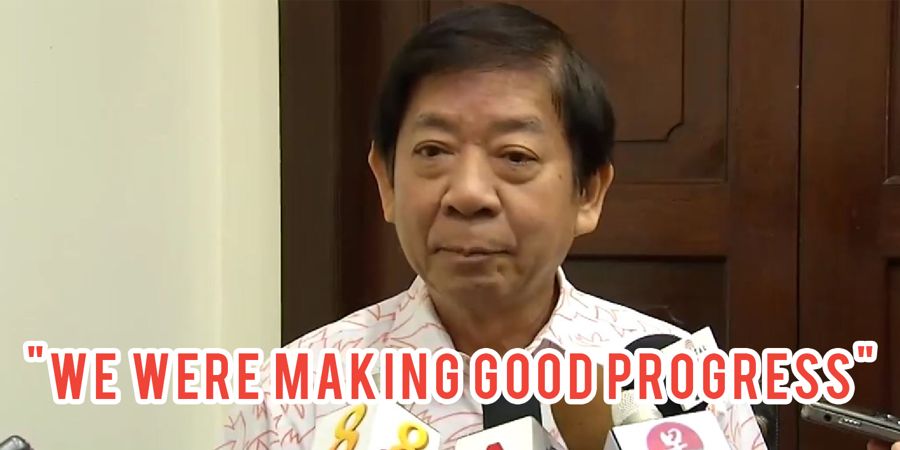 If there has truly been any increase in reliability in relation to our train services, it must be how we can always count on Transport Minister Khaw Boon Wan to provide explanations every time a major train disruption occurs.

Following the collision of two trains at Joo Koon on 15 Nov, SMRT bigwigs as well Transport Minister Khaw Boon Wan scrambled to account for the incident in a last minute press conference on the day of the incident.

Back then, we were pretty surprised when Minister Khaw apologised to commuters for the inconvenience and injuries, the first in a long time that he has done so. Our favourite Transport Minister even made an attempt to sympathise with commuters, saying that he was “equally upset as they [are]”.

Speaking to reporters in a doorstep interview, following a press conference by Transport bigwigs, Mr Khaw was back his to his usual self.

The Transport Minister admitted that while incidents such as the Bishan flooding and the Joo Koon collision affected the public’s confidence in Singapore’s train systems, “[transport authorities will] have to just get it over with, and regain the public confidence”.

Although Singaporeans might have decreasing confidence in the reliability of our train system, it seems that Mr Khaw has train-loads to spare, as he discussed about the progress he has made since becoming Transport Minister in 2015.

In a move that reeks of ‘ownself-check-ownself’, Mr Khaw evaulated his own performance as he is approached the halfway point of his ministerial term.

Mr Khaw argued that he gave himself 4 years to increase rail reliability, and said that he has been “making good progress”, a notion that his boss, Prime Minister Lee Hsien Loong agrees with. However, he also rued his own unluckiness, having encountered both the collision and flooding incident, which affected public perception of the progress.

Mr Khaw then issued his vote of confidence that the North-South Line has finally “turned the corner” as SMRT wraps up the re-signalling works on the train line.

He hoped that train service providers will be able to speed up the re-signalling process of the East-West Line so that commuters can see the “improvement in reliability”.

Shame on you Thales

Speaking about the collision at Joo Koon Station, Mr Khaw said that French engineering firm “Thales could have done better”. The signalling system on the East-West Line (EWL) is slightly complicated, with Thales’ signalling system used from Gul Circle to Tuas Link, whilst the old Legacy signalling system is used for Pasir Ris to Joo Koon.

Given that Thales has acknowledged and apologise for their mistakes, Mr Khaw has “decided to end their misery” by suspending services between Joo Koon and Gul Circle since, that is the problematic place where the signalling systems change from the old to the new.

Mr Khaw also reserved praise for SMRT Group Chairman Seah Moon Ming, who has “not been resting” and “has been working hard over the last few weeks” given the Bishan flooding and the collision.

Mr Seah has been busy beefing up the company’s engineering and maintenance team so that they can quicken the re-signalling of the EWL.

With our Transport Minister exuding so much confidence in his team’s abilities, it seems that normal train service should resume after the upcoming closure of 19 stations for maintenance works.

If not, shouts for hari-kiri will confirm reach its final crescendo.