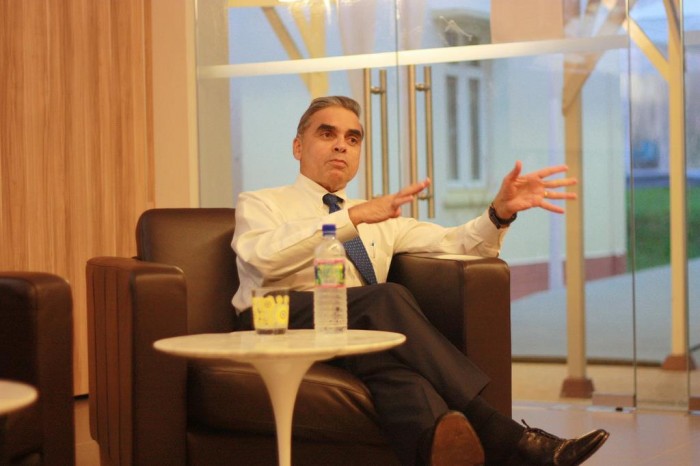 LKYSPP Dean has some ideas on controlling a hypothetical “rogue” President

On Monday (18 Jan), Kishore Mahbubani wrote an opinion piece calling for Singapore’s system of electing presidents reverted to a parliamentary elected presidential system, where the Government of the day selects the President.

That’s right, Singapore’s own Caesar Flickerman is helping to boost the power of the ruling party.

For those not in the know, Caesar is a fictional character in the Hunger Games who runs a talk show for the oppressive Capitol government.

And he shares some physical similarities with former ambassador Kishore Mahbubani. 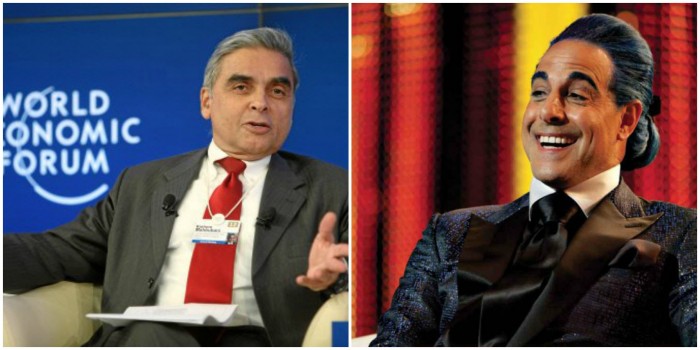 Unfortunately, his piece is riddled with arguments filled with more holes than Swiss cheese.

We take a look at 7 of these loopholes and contradictions.

Kishore suggests that people who do not change are doomed to failure.

One thing is absolutely certain. If we believe that we can sail into the next 50 years with the same set of policies that made us successful in the first 50 years, we are headed for trouble.

Yet, in the same essay, he also suggested that Singaporeans were “demonstrated wisdom” in the 2015 elections, by sticking to the unchanging rule of the People’s Action Party — one that had served us for the past 5 decades.

Kishore believes that “we can go back to the old practice of having the Parliament elect the president”.

This netizen sums it up best.

3. Contradicts himself over the intelligence of the electorate

So is the electorate considered wise or not? There are some double standards going on here.

Or is he trying to suggest that the electorate should just vote for the PAP to be “wise”?

4. Takes steps to solve a problem that wouldn’t exist

Kishore explains the idea behind the elected presidency was so that a “second key” was needed to safeguard the reserves from being squandered away by a “rogue” government.

However,” [they] did not consider the possibility that a “rogue” president could be elected” .

However, an elected president only possesses limited ceremonial powers.

Besides, according to Law Minister K Shanmugam in 2011, “the president can veto or block government actions in specified areas, but he has no role to advance his own policy agenda”.

This areas include the safeguarding of reserves; the appointment of personnel to key civil service positions;  the overseeing of Internal Security Act, maintenance of Religious Harmony Act and Corrupt Practices Investigations Bureau investigations.

In addition, under the Part V, Chapter 1, 22L of the constitution, the parliament and judiciary possess powers to remove a rogue president.

Thus, is there really a need to change the elected presidential system?

By doing away with elected presidency and letting “the parliament elect the president”, removes the check and balances on the parliament.

Wait. That brings a certain Pritam Singh quote to mind! Because with a parliamentary elected president, the “second key” is effectively rendered useless.

6. Simplifying Thaksin to a populist leader who gave out money

We saw this in Thailand when then Prime Minister Thaksin Shinawatra was elected. Why should a population not vote for a populist leader who promises to improve their lives immediately with cash handouts?

Thaksin Shinawatra indeed made use of populist policies to attract his rural supporters with regards to the one-million baht given to Thai villages for development.

However, Kishore also over-simplifies, and misses out on other policies which have improved the lives of the people and Thailand’s economy during his term. 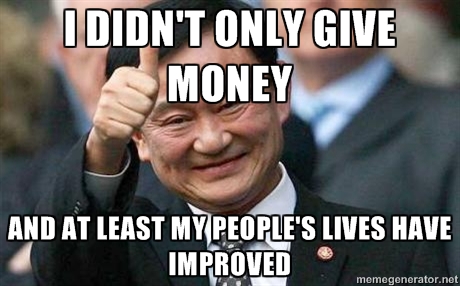 7. Condemning populist leaders but yet playing to populist sentiments

Kishore suggests “rotating the president among the different ethnic groups” and “choosing [the president] on the basis of merit”.

But isn’t choosing a Malay president to represent the Malay population in Singapore precisely a populist policy?

In fact, doing so plays the racial card and goes against the Singaporean mantra of meritocracy — where the most capable are given power.

By rotating the presidential position, we’re effectively preventing a capable people from taking office simply because they are of the wrong race.

Is a change to parliamentary elected presidency necessary?

At the end of the day, the question that remains is whether we revert to the former system of choosing presidents.

With so many loopholes present in Kishore’s argument, we can only ponder about the possibility he might be wrong.

If he suggests a change, the onus is on him to provide a compelling reason for changing the presidential system. 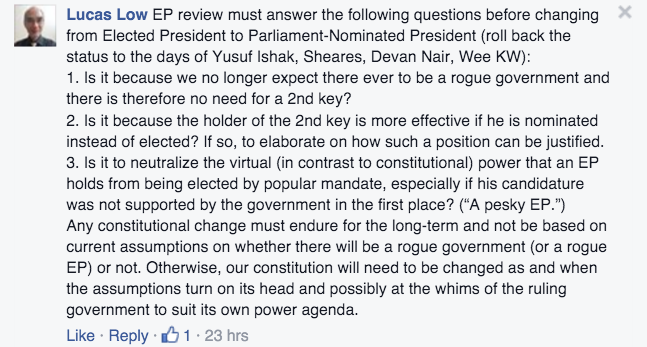