An apology carried by Kiss 92 FM DJ Maddy Barber on the radio station’s Facebook page on Wednesday (Jan 11) night, over the offensive remarks made on its morning show that day, has failed to get the desired effect.

In case you missed it, here’s what happened: The hosts of “Maddy, Jason and Arnold in the Morning”, specifically Maddy and co-host Jason Johnson, claimed that Malays and Indians in Singapore don’t get enough sleep because they were raised to party and have fun at night; while the Chinese have to send their kids to school and go to work early.

Not surprisingly, this enraged a few people. 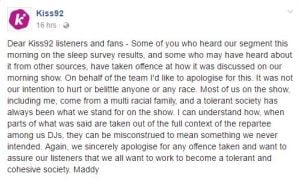 With the exception of a handful, netizens were not happy with the apology. Here’s what they said:

Many felt that the post wasn’t an apology, but just a way of blaming the people who got offended for being offended. 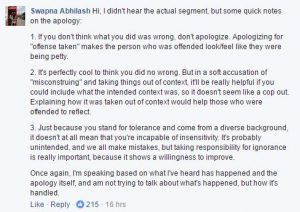 Some thought that the apology sounded like it came from a lawyer’s draft.

Some said the full recording of their on-air remarks should be produced so that everyone could judge.

Some listeners expressed support and encouragement for the DJs.

Some did not understand what the big deal was over the comments.

While one netizen pointed out that in order for Kiss 92FM to preserve their dignity, the DJs involved should resign. 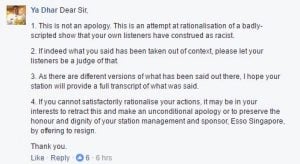 We’re curious to see if Kiss 92FM, which is a station under Singapore Press Holdings (SPH) Radio, will provide a further response to the still-unappeased people, or take it with a pinch of salt and act as if the issue has been resolved.