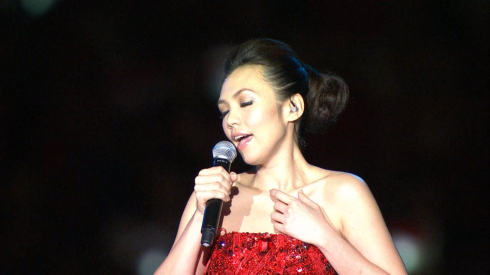 To most Singaporeans, Kit Chan is a household name, with many remembering her as the singer of National Day Parade (NDP) Song, ‘Home’. This talented songstress, also dubbed one of Singapore’s most multi-faceted artistes, made her entry into the Taiwanese market with her 1994 album ‘Heartache’.

Recently, 42-year-old Kit Chan disclosed her participation in the third season of I Am A Singer, a popular China reality singing competition to be aired in China starting 2 January. Home-grown singer Kit Chan is the first Singaporean in the show.

This reality singing competition has a spin: pitting established singers against one another. The first episode of the contest has already been filmed last Saturday (20 December) with other singers like Taiwan’s A-lin, Hong Kong’s Leo Ku and China’s Anson Hu.

Former judge of Channel 5 reality singing competition The Final One said, prior to joining the competition:

I didn’t like reality shows and I was against the idea of singers having to compete against each other.

So what made her eventually join? Her old friend, Sandy Chi, eventually managed to persuade her.

Fun fact about the competition

Leo Ku was confirmed to be the host for season 3, despite him not being a native Mandarin speaker. More interestingly, being the host does not exempt him from elimination. We look forward to him announcing his own elimination (ok not really but it’ll make for some great TV)!

Motivations to join I Am A Singer

When asked about her thoughts on her chances of winning, Kit responded:

I’m not here to try and win the competition. To me, it is really a performance platform.

However, some netizens think otherwise:

Hopes for the Singaporean Singer

Despite the naysayers, the majority are rooting for the songbird. With ‘Home’ being the undisputedly best NDP song, it is no wonder that many Singaporeans are waiting with bated breath for her performance:

There is rife speculation that the results of the Hunan TV competition are staged and not dependent on the singing prowess of the singers.

Instead, the hidden criteria seems to be based on popularity.

Apple Daily got wind of the results from I Am A Singer’s first episode and reported that Kit Chan came in last out of the 7 singers. Some guess that this might be due to a lack of fans for Kit in the Hunan region.

Nonetheless, we await in anticipation to see what this powerhouse songstress will deliver. If she succeeds in pitting herself against other established singers, people would be more aware of the talents embedded in our tiny red dot. We wish Kit all the best in this competition!