Must Share News – Independent News For Singaporeans
Home News Kong Hee’s Jail Term Gets Reduced, But He Is Disappointed 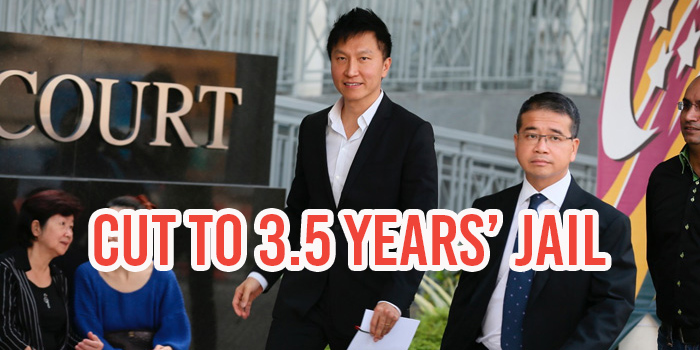 Kong Hee Still Has To Go To Jail, But Not For As Long

It seems that God, after saying sorry to City Harvest Church (CHC) pastor Kong Hee, felt so apologetic that he decided to compensate him too — by getting his jail sentence reduced.

Yes, praying over oil does help after all — Kong Hee now has to serve just 3.5 years in jail after being convicted of misappropriating millions in church funds to fund his wife’s music career.

He was originally supposed to serve 8 years, but he appealed the conviction and sentence. The court ruled on Friday (April 7) morning that his sentence would be reduced.

However, Kong Hee is “disappointed”, his lawyer was quoted by The Straits Times as saying — he wanted the conviction to be overturned.

I know that many of you have been praying and fasting for the team and I. I am very thankful for the support and prayers that have been shown to our families. While the conviction being upheld is not what I have hoped for, I am grateful that the sentence has been reduced. Once again, thank you so much for all the love you have given to me and my family.

We think many people are also disappointed — like the prosecutors, they wanted to throw him in jail for longer.

Lest we think this is only about Kong Hee, let’s not forget there were also 5 other CHC members convicted along with him. They also got their jail terms reduced.

This is what they originally got, and what they will have to serve now:

Note that despite being fingered as the ringleader behind the case, Kong Hee gets a reduced sentence that puts him in jail for just one month longer than fellow church member Chew.

“Chio bu” of the group Serina Wee gets her sentence almost halved, while the other lady Sharon Tan will serve just 7 months in jail — that may be shorter than how long Sun Ho’s album stayed on the charts, thanks to the “support” of CHC members.

Apparently the judges believed that those convicted did not gain personally from this scandal, reported The Straits Times.

“None of the appellants could be said to have benefited, and their fault lies in adopting the wrong means,” The Straits Times quoted the judges as saying.

The three-judge panel also ruled that the defendants had believed the embezzlement would advance the church’s interests, and was genuinely endorsed by the church.

We’re not sure how it can be ascertained that the defendants had genuinely believed that their actions would advance the church’s interests — only God can figure out what was in their minds when they did it.

Unless, of course, God revealed his infinite wisdom to the judges.

Looks like at least one netizen thinks prayer did play a part in helping to cut the sentences of the CHC 6:

As for other netizens, it seems there is universal disappointment:

Some are disappointed that he is going to jail at all — his supporters, perhaps:

A statement from CHC said that they are “saddened”, but thankful for the shorter sentences: 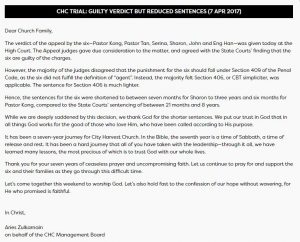 With this ruling, we hope this marathon saga is finally over.

We won’t blame the public for not remembering, but the trial started in 2013, and was investigated as far back as 2010.

All of them have asked for deferment of their jail terms, which have been granted.

Who knows if there will be any more twists and turns, but we advise the CHC 6 to just serve their jail terms quietly so the rest of Singapore can lay this whole scandal to rest.

To see what led up to this point, read our story about Kong Hee’s dubious educational qualifications.