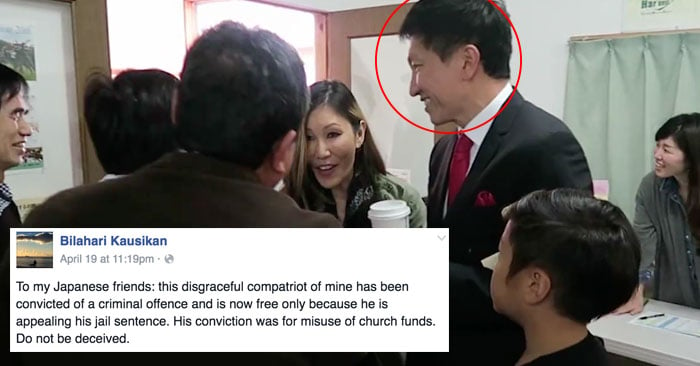 By now, anyone who is not living under a rock should know that Kong Hee was found guilty of misusing church funds amounting to 50 million dollars to fund his wife Sun Ho’s singing career.

For that, he is sentenced to eight years in jail.

However, Kong Hee is now out on bail pending an appeal on his case. With his time as a free bird ticking, he made his way to Japan together with a team of people from his church and offered humanitarian aid.

He even wrote that Kong Hee is a criminal who is only out on bail and shamed him by calling him “disgraceful compatriot of mine”.

What is Kong Hee really doing in Japan?

Kong Hee and his team appeared to be rendering aid to the victims of earthquake in Japan.

Is Pastor Kong trying to do some good for the victims to atone for his mistakes?

Kong Hee has also documented his journey in helping sister churches together with his wife.

Some were not impressed that Kong Hee could go to Japan on bail.

While some were very appreciative of Kong Hee’s generosity:

According to AsiaOne, Kong Hee said that “all other church buildings in the town have collapsed”.

In light of this, City Harvest Church and Kong Hee will still be sending disaster relief teams to clean up the leftover debris and remnants of the earthquake in Mashiki.