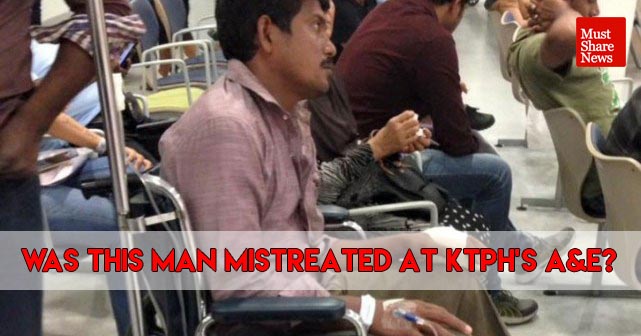 On 9 Mar 16, we wrote in this article that the patient was accompanied by Ko Ko Ye Chit, an assistant manager at Lucky Joint Construction (LJC). This information is inaccurate as Mr Ko, the patient and the two other workers referred to in this article are not under the employment of LJC. Mr Ko had left LJC in August 2013 and is now working for another company.

Hospital says it followed protocol, disappointed that photograph was taken

Khoo Teck Puat Hospital has finally broken its silence against a strongly-worded Facebook post about a bleeding foreign worker that the post claimed was not treated properly in the Acute and Emergency (A&E) Care Centre.

The viral Facebook post, along with a photo of a foreign worker in a wheelchair, has since been taken down. Earlier, 20-year-old Nurul Narina said that she saw a foreign worker with a bleeding hand wrapped in a blood-soaked handkerchief when she was at the hospital’s A&E with her mother. Nurul felt upset by what she thought was a lack of proper treatment of the foreign worker.

According to The New Paper,

She claimed that: The man was not helped immediately, that he was bleeding while waiting and that his drip was bloody twice. She also said that his employer had been there for just a short time.

Khoo Teck Puat Hospital has come forth to clarify that the man in question was promptly dealt with and that there was no lapse in protocol.

The foreign worker injured his hand at 5pm when the blade of a saw came off as he was sawing a pipe. He cut his finger badly. The man was brought to a GP (general practitioner), where his wounds were dressed and the bleeding stopped.

According to CCTV footage verified by The New Paper, the man walked into the A&E at 8.14pm and nurses checked his hands immediately to make sure there was no active bleeding and cleaned and dressed his wound.

At 8.27pm, Ko Ko Ye Chit, an assistant manager at Lucky Joint Construction where the patient works, walked in. He went to park his car earlier, after dropping the man and two other workers at the A&E.

At 8.47pm, the man was seen by another nurse at triage, which is the ​process of assessing the urgency of the wound in ​order to ​decide which ​ones are the most ​serious and must be ​dealt with first. Assistant manager Ko Ko leaves to buy food and drinks for the three men.

The patient was classified as a Priority Level 3 patient (P3) , which is someone with a minor emergency.

About nine minutes later, Associate Professor Eillyne Seow examined the patient and at 9.15pm an X-ray was done on his hand.

Disappointed that photograph of patient was taken

The CEO of the hospital,  Chew Kwee Tiang said:

It’s disappointing that this woman took a photograph of the patient without his knowledge or permission and posted it on social media.

The hospital does not encourage photo-taking of patients on our premises as it would be an invasion of privacy.

While Nurul probably did not expect her Facebook post to turn viral, the post probably managed to lead some readers to raise their virtual pitchforks against nurses at the A&E.  Nurul had the welfare of the foreign worker in mind, but it pays to make sure what is posted online is accurate because after all, Facebook is a public platform, for all to see.

Featured image via The Independent
With reference to The New Paper