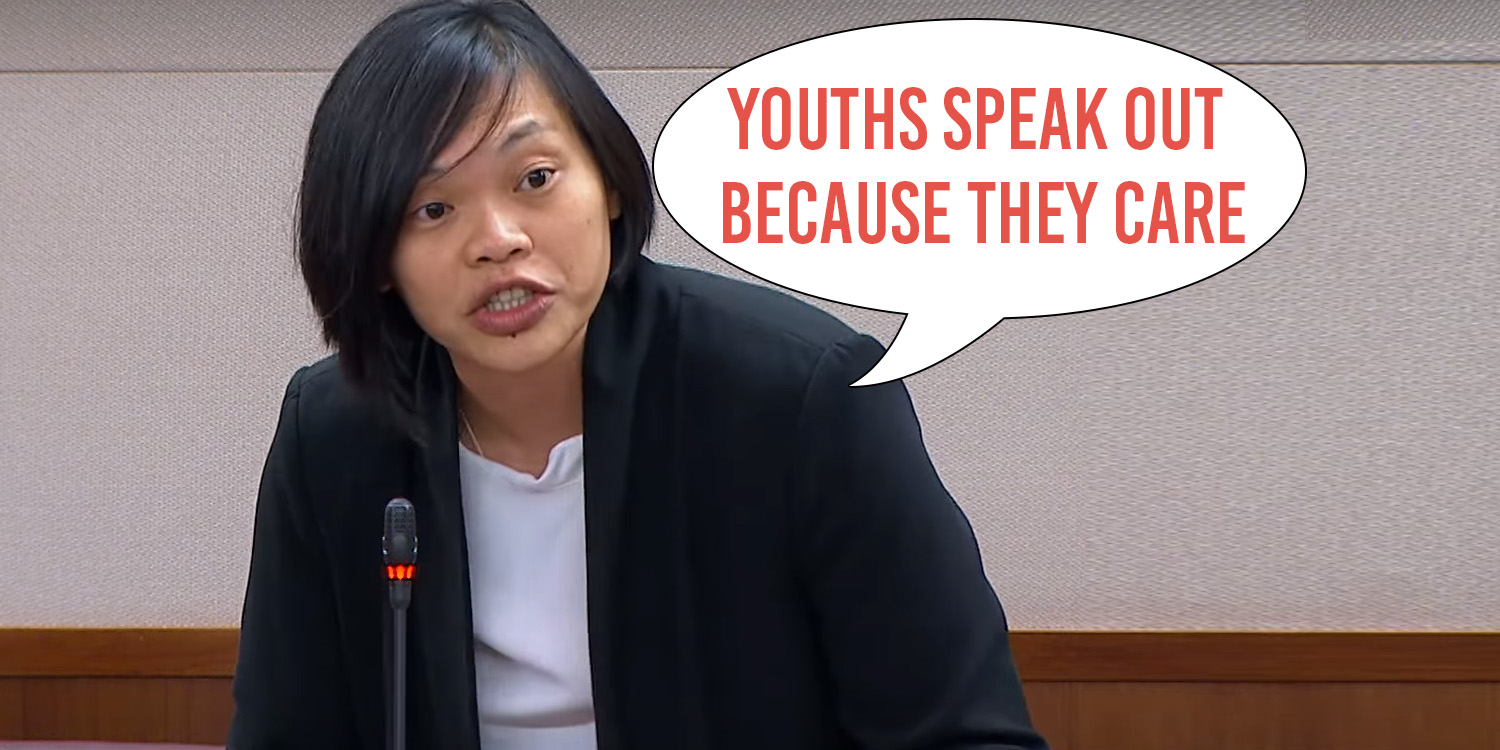 Thursday (17 May) was an interesting day in Singapore’s Parliament.

Phrases like “YOLO” and “FOMO” made their way into the chamber, showing that MPs do know how to speak young.

Or it just shows that they try to.

But the speech that captured the attention and imagination of the youth didn’t actually have any of these “youthful” phrases in it.

It was one delivered by Nominated MP Kuik Shiao-Yin, who boldly called on the Government to be more receptive to dissenting voices.

She explained the rationale for this, saying,

Ms Kuik’s comments were in response to last week’s President’s address and were largely based on her personal observations.

Here’s a round-up of the points she made:

It’s no secret that in recent years, our Government has tried to adopt a more collaborative approach to governance.

The bedrock of this are feedback units like REACH, through which the popularity of certain policies are evaluated.

But Ms Kuik warns that such government-commissioned feedback units are likely to paint an overly-positive picture of the ground, masking underlying unhappiness.

She credits this to the fact that people who have dissenting views are unlikely to respond to such polls in the first place.

They don’t like registering their dissent openly – be it on survey, on social media or any form of record.

Reasons for this range from fear of an open rebuke to thoughts that their opinions may be invalid.

Ms Kuik notes that failing to see their points of view might lull the Government into a false sense of security.

Recounting the events that led to the American invasion of Iraq, Ms Kuik concluded that not being receptive to differing points of view might lead to “astronomical” mistakes.

She even brought it home by emphasising how hearing difficult truths has always been the Singaporean way.

To demonstrate this, she quoted Deputy Prime Minister S Rajaratnam:

2. People do care about controversial issues

Ms Kuik said that casual readers of a recent article in The Straits Times might get the impression that Singaporeans didn’t care about the 6-hour questioning of Dr PJ Thum.

But her own observations were different.

There were definitely some people asking about it, wanting to talk about it and showing concern about the general handling of dissenters. So I don’t think it’s a case of ‘nobody’ cared.

She adds that those who wanted to talk about such issues weren’t just the usual suspects, or the “professional agitators”, as she termed it.

They included “more establishment-leaning” residents who expressed discomfort at the Government’s style of engaging dissent and opposition.

3. On dissent and leadership

But she made it clear that observers were not asking the Government to go soft on irresponsible dissent.

Instead, she said that youths hoped for leaders who knew that they did not dissent for the sake of it.

This, Ms Kuik concluded, was a different idea of leadership from the voters of yesteryear.

Quoting a student leader from Tembusu College, Ms Kuik Shiao-Yin said that the younger generation cared about including those with different views in discussions – not excluding or exiling them.

How far do we really have to go to bring down people with political opinions that are different from our own?

Youths also wonder what society gains – and loses – when it dismisses dissenting voices simply because they dissent.

Must it always be a zero-sum game in dealing with dissenters or can we work towards a win-win?

4. Not about who’s right, but about doing right

Ms Kuik also made reference to President Halimah Yacob’s comments about future leaders needing to earn the “right to lead”.

Whether leaders receive that right or not depends very much on the trust their people have in them.

I train people in how to build trust through conversations and we have a simple rule of thumb. In every argument, we really only have two end-games to play: you can either prioritise being right, or you can prioritise retaining the relationship and the results that come through relationship.

Ms Kuik believes that the Government has a lot to benefit if it follows the second approach.

What you gain is new ground to work together towards doing what is right.

A voice for youth

Early in her speech, Ms Kuik described the role she believes she was given in Parliament.

I was nominated into Parliament to give insight into youths’ concerns.

And judging by favourable responses to her speech, it’s safe to say that Ms Kuik has done just that.

As she admits, this may be her last major speech in Parliament.

So on behalf of other 20-somethings around this country, thank you, Ms Kuik Shiao-Yin.

You can view Ms Kuik’s speech in full here. A transcript is available here.