Prime Minister Lee Hsien Loong is undeniably one of Singapore’s most popular politicians, with people lining up to take selfies with him.

Visited Bedok Reservoir-Punggol and Paya Lebar divisions in Aljunied GRC yesterday morning. Met many residents at a wellness centre, the Hainanese Village Centre, a community fiesta, or just going about their Sunday morning activities. Ended my visit with a dialogue session. Thanks to all grassroots leaders who attended for sharing your ideas and feedback, not just about Aljunied but national issues too. Victor Lye, his fellow grassroots advisors, their team of activists and volunteers have been working hard serving residents. My heartfelt thanks to them. Keep up the good work! I hope residents support them to continue doing their best for the Aljunied community. – LHL ([1-2] MCI Photos by Fyrol; [3-5] MCI Photos by Terence Tan)

But what if we told you a recent poll uncovered that he isn’t the most admired politician in Singapore?

A study by a British independent research firm YouGov revealed that former American President Barack Obama is the most admired man here.

According to the poll, Mr Obama has an ‘admiration score’ of 12.7%.

In contrast, PM Lee’s admiration score is 4.1% — less than a third of Mr Obama’s.

Thankfully, the poll came out after Mr Obama’s dinner with PM Lee at the Summerhouse in March, or that might have made for some awkward conversation.

President Halimah not in Top 10

Here are the results in full: Perhaps unsurprisingly, PM Lee was the only local politician to make it to the Top 10.

The next best-performing politician is President Halimah Yacob, whose admiration score of 2.9% is lower than Queen Elizabeth II (4.6%), Oprah Winfrey (6.5%) and even Taylor Swift (3.1%).

The previous edition of the poll in 2016 showed a very different picture.

In that version, PM Lee had an admiration score of 9.1%, beating out Mr Obama whose 8.8% figure put him in third place.

Microsoft guru Bill Gates topped the list that year with a score of 9.9%.

The dip in Ms Aung’s popularity over the past two years can be attributed to her handling of the Rohingya crisis.

But reasons for PM Lee’s reduced score are more difficult to ascertain.

Perhaps the 38 Oxley Road saga had something to do with it?

How YouGov got its score

To calculate the admiration score, YouGov asks respondents to choose people they admire from a list.

Those surveyed then picked one of these to indicate who they admired the most.

Together, these figures create the admiration score.

To make it more reflective of local trends, researchers also include popular locals in the list.

This year’s poll collected the views of 37,000 people in 35 countries.

Singapore was one of 19 countries that placed Mr Obama at the top — others include Japan, Canada and the United States. 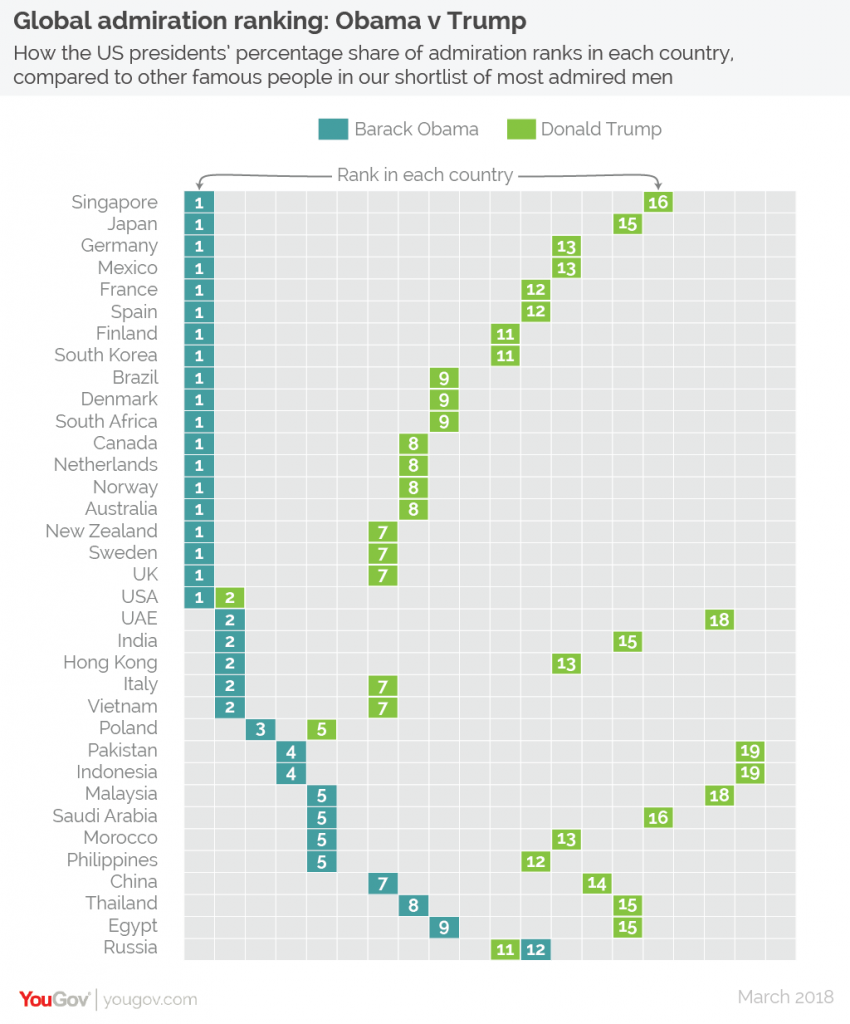 The current occupant of the White House didn’t fare quite as well.

Mr Donald Trump ranked 16th in Singapore and 2nd in his home country. He performed better than Mr Obama in only one country: Russia.

Although this list is indicative a small sample of the population’s preferences, it’s nonetheless an interesting marker of how PM Lee may fare as he goes into his last General Election as party leader.