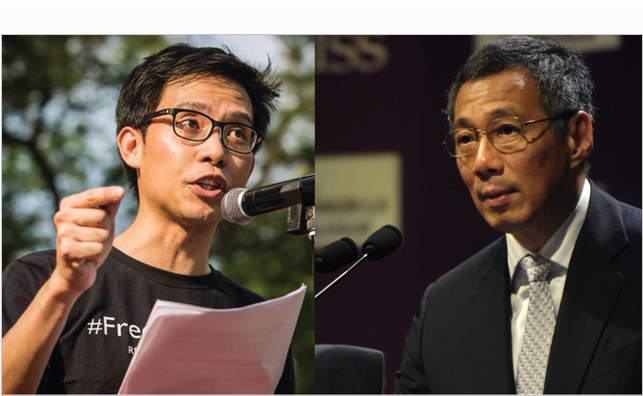 The clash between Prime Minister Lee Hsien Loong and Roy Ngerng came to a head yesterday (1 July) at the Supreme Court.

PM Lee gamely accepted the challenge to be cross-examined by Ngerng. Ngerng has no form of legal training and was guided by Justice Lee Seiu Kin, the judge for the case.

The entire cross examination resembled a boxing match between the two traded blows across the court room.

MustShareNews brings you the key highlights of the “boxing match” of Lee Vs Ngerng at the Supreme Court.

Arrival Of The Boxers

PM Lee was chauffeured into the courtroom, and he sportingly waved at his supporters.

So what’s at stake?

The ruling yesterday was to access the amount of damages that Ngerng will have to pay PM Lee for defamation.

Ngerng will be looking to argue his case to pay the least amount possible.

On the other hand, PM Lee will be trying to claim the highest amount of money possible from Ngerng, perhaps, hopefully to make Ngerng stare at plain rice and crowdfund again.

He argued that a higher amount should be awarded in this case, on the basis of the continuous publication of Ngerng’s allegations, Ngerng deplorable conduct, and Ngerng’s constant and renewed assault against PM Lee’s image.

From the very first, the defendant (Roy Ngerng) set out to wound.

He (Ngerng) knowingly and maliciously published a false and vicious libel against the plaintiff to inflict maximum injury. He (Ngerng) then cynically capitalised on, and continues to exploit, that libel and the ensuing lawsuit to promote himself as a champion of free speech.

After his request for a Queen’s Counsel lawyer was turned down by Justice Steven Chong at the High Court last month (11 June), Ngerng decided to represent himself in the case.

Ngerng’s opening statement asserted that freedom of expression in Singapore will be negatively affected if the damages incurred is too steep.

awarding a disproportionately high amount of damages… would cast a chilling effect on freedom of expression in Singapore.

We pick out the key highlights of the match between PM Lee and Ngerng yesterday.

Ngerng questioned PM Lee’s claim that, just because his article was of interest to the general public, does not mean that people will want to read it.

PM (Prime Minister Lee Hsien Loong): I’m sure you didn’t write this hoping Singaporeans would not read it.

PM Lee lures out Ngerng’s intention in writing the article.

Roy Ngerng (RN): Do you know when I started writing my blog?

PM Lee totally shoots down that irrelevant question from Ngerng.

RN: Can you point out which section of the post, which are taken from CNA (Channel NewsAsia) as factual statements, show malicious intent

PM: I think that’s meaningless. It is the totality that is condemnatory. The whole of the article should be taken.

PM Lee points out a flaw in Ngerng’s argument by asserting that entire article should be taken as evidence that Ngerng had written with malicious intent, rather than sections of the article.

RN: How do you know the proportion of people who read the later article would look for offending image and article?

PM Lee owns Ngerng in this round, by pointing out how poorly the question was constructed.

RN: How is my article defamatory when it is all factual statements? Did I mention your name in my articles?

PM: No they did not mention my name.

PM: All the institutions you mentioned are all in the Government, which you have taken pains to prove that I am responsible for.

PM Lee catches Ngerng’s trick of trying to use the absence of name to proof that there were no malicious intent in the articles.

Ngerng queried PM Lee if he had made any comparison between what is happening in City Harvest Church and the person “Lee Hsien Loong” in his blog post that started the defamation.

PM: You did not have to (name me specifically).

Ngerng proves that he did not have malicious intent to defame PM Lee.

RN: You’ve already said that you admitted that you used the law against me.

PM: I have sued you for defamation and you’re very unhappy about it. You don’t accept that you have defamed me. You think I’m prosecuting and persecuting you.

RN: Mr Lee, first, do not put words into my mouth. I said I accepted the judgment, I did not say I do not accept the judgment.

PM: Because having acknowledged that you defamed me and having taken back all the words, you are now saying that you are innocent, that I am prosecuting you, I am silencing you and it is wrong for me to do that, when in fact I’m just vindicating my reputation.

RN: You sued me, right? Are you using the law to persecute me?

PM Lee sounds unsettled by Ngerng continuous attack on his position, only managing to muster a weak “No”.

RN:You did not reach out to me before you sued me?

PM: No, you defamed me. I have to defend myself.

RN: Yes, yes. The question is you didn’t reach out to me.

PM: Yes, I wrote you a letter asking you to take it down and apologise.

RN: Now, Channel NewsAsia (CNA) wrote to me on Twitter, I used a photo of theirs and they asked for a photo credit. If you had reached out to me, we could have resolved things.

PM: You have chosen a different path for your own reasons, I accept that. Well, you have to take the consequences.

PM: You have been skirting closer and closer to defaming me for a long period of time. I have been watching this, I have not responded. Eventually, it was unambiguous and flagrant and I decided I had no choice but to act.

RN: Mr Lee, you just made an accusation about me.

PM: Because you have been making more and more outrageous allegations about the CPF, stopping short of accusing me of doing bad things personally, but coming closer and closer to saying that. And at some point last year, when you published this post on 15 May 2014, I consulted my lawyers and it was completely unambiguous and I could not not act.

PM Lee definitely scored this round, asserting that he had been watching Ngerng for a long time, only acting when Ngerng finally crossed the line. Ngerng had no good reply — it is probably true that Ngerng had been attacking PM Lee indirectly before the controversial blog post.

RN: With great power comes great responsibility, if the Prime Minister himself has been reckless, why should I take the full responsibility for his reputation?

Ngerng clearly wins this round, by exposing PM Lee’s recklessness which was also to be blamed for the escalation of the entire event.

RN: Mr Lee, you said,” If we didn’t get it right, I’m sorry. But we will try better next time.” You said that this at the 2011 general election.

Mr Lee, will you give me a next time?”

PM: Saying sorry would have been enough, but that was not what you did.

PM Lee subdued Ngerng in this round again after asserting that Ngerng did not stop sullying PM Lee’s name even after apologising.

The verbal battle between Ngerng and PM Lee is definitely more exciting than the fight between Mayweather and Pacquiao.

The entire case is expected to be wrapped by the third day (3 July) when the total damages to be paid by Ngerng to PM Lee will be announced in the high court by Justice Lee.