As expected, the ceasefire has been broken with responses from the Lee siblings rolling in. This in lieu of recent recommendations made by the Ministerial Committee concerning the Oxley Road saga.

Here’s a quick summary of the latest proverbial shots fired.

LWL keeps it short and sweet

Ms Lee Wei Ling wrote succinctly on Facebook about her feelings towards the new developments in whether to keep Oxley Road – the home of her father, Mr Lee Kuan Yew (LKY) – or to demolish it.

You can read her post on Tuesday (3 Apr) here.

Or view this screenshot below.

Reiterating that her father was as direct as her, she was of the opinion that his instructions regarding the house were “absolutely clear”.

She reminded readers that Mr Lee Kuan Yew and his wife Ms Kwa Geok Choo, had “long decided they wanted it demolished” after they were gone.

Ms Lee quipped that it would require “unbelievable lack of intelligence” or “determined denial” to misunderstand the wishes of her father.

She then sarcastically disparages her “big brother & his committee” for achieving both of these with “amazing ease”.

LHY keeps it even longer

Mr Lee Hsien Yang (LHY) uploaded his Facebook post on Tuesday (3 Apr), with a cryptic caption, “Response to the Report of the Once-secret Committee”.

Here’s a screenshot of his post, which includes two lengthy screenshots, in case you can’t see it. 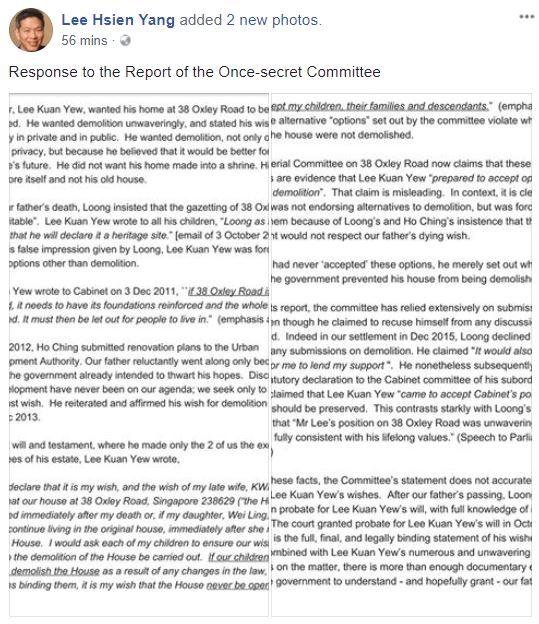 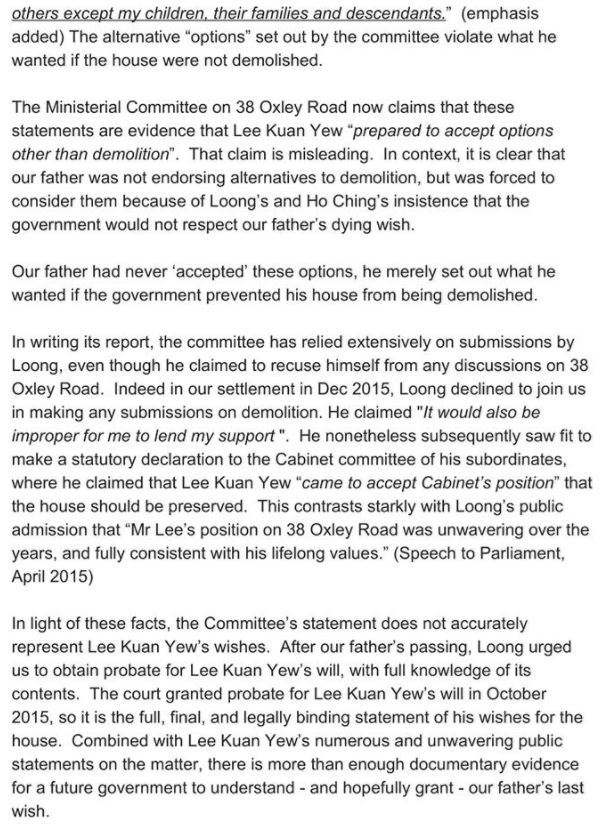 LHY begins by saying that Mr Lee Kuan Yew wished for his home at 38 Oxley Road to be “demolished unwaveringly”.

And that this wish was repeated both privately and publicly, as the late Mr Lee believed “it would be better for Singapore’s future”.

According to LHY, Mr Lee did not want his home to be made into a shrine, as his legacy was “Singapore itself” and not his house.

However, LHY wrote that Mr Lee Hsien Loong (LHL) insisted that the “gazetting of 38 Oxley Road” was “inevitable”, telling their father he would declare it as a heritage site via email on 3 Oct 2011.

This forced his father to consider other options than demolition.

Bringing us to the letter which LKY wrote to Cabinet on 3 Dec 2011, stating,

If 38 Oxley Road were to be preserved, its foundations would have to be reinforced and the whole building refurbished. It must then be let out for people to live in.

As such, he called the Ministerial Committee’s claims misleading, in reference to suggesting LKY’s statements may be used as “evidence” to show he accepted outcomes other than demolition.

Mr Lee Hsien Yang suggests that his father’s words were taken out of context, as he was not “endorsing alternatives to demolition” but merely explaining what needed to be done if the government “prevented his house from being demolished”.

After which, his sister-in-law Ms Ho Ching allegedly submitted renovation plans which LKY “reluctantly went along” with, only because he believed the government intended to go against his wishes.

LHY attributed this to his brother and his sister-in-law’s “insistence” on not respecting their father’s “dying wish”.

3. LHY and LWL were the executors of LKY’s estate for a reason

LHY argues that the alternative options set out by the committee violate what his father would have wanted.

He reiterates that his father’s demolition wish was affirmed in his last will — explaining why both LHY and his sister were made the executors and trustees of LKY’s estate.

LHY then reposts the oft-quoted contents of his father’s will, emphasising that the house “never be opened to others except LKY’s children, their families and descendants”.

He claims that the Ministerial Committee has “relied extensively” on submissions by LHL, although the Prime Minister has “recuse(d) himself from any discussions on 38 Oxley Road”.

According to their settlement in Dec 2015, Mr Lee Hsien Loong apparently did not join his siblings in “making any submissions on demolition”, as it would be “improper for [him] to lend [his] support”.

However, LHL made a statutory declaration to the Cabinet committee allegedly claiming that LKY eventually “came to accept Cabinet’s position” to preserve the house.

LHY argues that this is in stark contrast to his brother’s public Parliament speech in Apr 2015 that the late Mr Lee’s position on Oxley Road was “unwavering over the years, and fully consistent with his lifelong values”.

5. LHY hopes his father’s last wish will be granted

Thus, he concludes that the Committee’s statement does not accurately represent LKY’s wishes, as per his legally binding will in October 2015.

Taking LKY’s “numerous and unwavering public statements on the matter”, it is LHY’s hope that the “future government” will understand and “hopefully grant” his father’s last wish.

Evidently, this issue is far from resolved, with all siblings but Mr Lee Hsien Loong rejecting the Ministerial Committee’s recommendations for 38 Oxley Road.

Most of us just look on in confusion as the Oxley Saga continues, with a tinge of sadness that things haven’t been resolved.

Especially since LKY’s death anniversary has barely passed us by.

In the meantime, let’s remember Mr Lee’s fiery spirit as he famously took down the CIA.