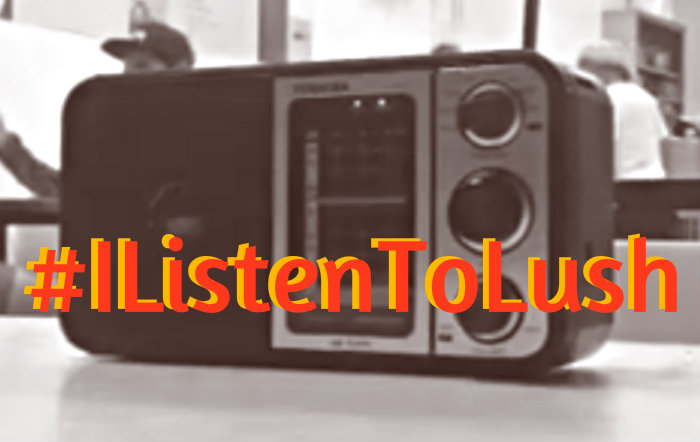 Leonard Soosay barely listens to music, but comes up with alternative method to save local radio station Lush 99.5FM

Have you ever been so moved by a movement that you were convinced to do something you wouldn’t?

Singaporean Leonard Soosay bought a portable radio player, sat in a coffee shop all day, and drained its battery, while listening to Lush 99.5FM.

All just to show his support for the radio station in danger of shutting down. I would do the same, but I have an app on my phone for that. #KidsTheseDays

This is what Leonard Soosay posted on Facebook about joining the #IListenToLush movement. 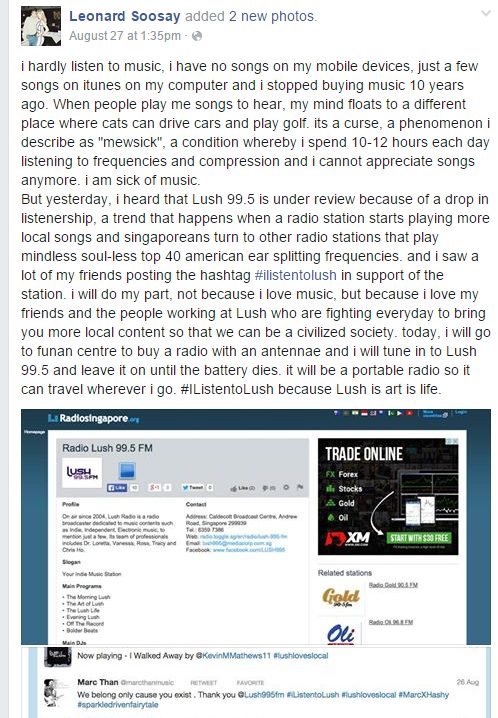 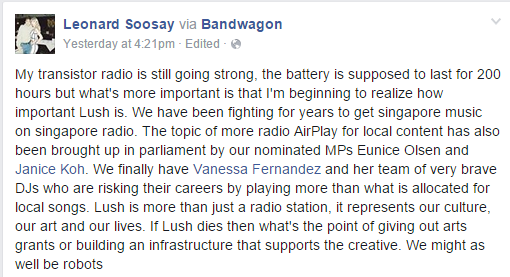 Except Leonard Soosay is no ordinary Singaporean.

99.5FM in not so lush territory

The radio station has been experiencing a major drop in listener numbers because of this, and rumours are rife that they are currently undergoing a review of license by Media Development Board (MDA).

These rumours eventually brought rise to the #IListenToLush movement.

But Leonard isn’t the only known figure that has showed their support for #IListenToLush.

The hashtag #IListentoLush trended on Twitter for almost an hour on Monday (31 Aug), with Singaporeans and fans from all over the world chipping in to support the radio station.

#iListentoLush from #London or wherever else I am in the world because there's nothing like listening to a piece of home from far away. in the fight to champion Singaporean music, we've never come as close to our goals as we are now because @lush995fm is the feistiest contender in the ring. thank you for pulling out all the stops for our indie local scene and indie music all over the world. Lush is an alternative radio station, the voice for those of us who have chosen to be different. it cannot be held to mass market ratings, the same way the musicians it features cannot and will not fight against the mainstream – we live by different standards and we are proud of that, it is who we are and who we're meant to be. Lush stands alone, as it should, as it is meant to be, because it is unlike anything else. we cannot live without Lush as a station, a lifestyle, a culture. it is EXACTLY what Singapore needs. hope you see that soon #mediacorpradio, #NielsenSurvey. thank you for all your support #lush995, you'll always have mine. ❤️ #lushloveslocal #alternativemusic #alternativeradio #indiemusic #indieradio #meekellahinlondontown

#ilistentolush even if I'm not Singaporean nor in Singapore. It's a model for Asian alternative radio stations, I'll tell you that.

It’s a pleasure knowing that our scene has not failed on itself just yet (yes, we have a scene). Just looking through the hashtag on Twitter and Facebook from Singaporeans and others gives us hope that maybe this movement can actually save a radio station.

Let’s all give Lush 99.5FM a hand, simply tweet or post the hashtag #IListenToLush to join the movement!

Talk to us! Send in your story suggestions or comments to [email protected]m 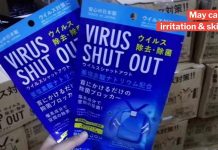