Weeks into the Lee family saga over 38 Oxley Road erupted, and just a day before a parliamentary session on the dispute will be held, Mr Lee Hsien Yang (LHY), second son of the late founding father Lee Kuan Yew, took to Facebook again on Sunday (July 3) to slam the ministerial committee set up to decide the future of the house.

The third child of Mr Lee has dedicated his page to speak up about his late father’s house, and the alleged misuse of power by his brother, Prime Minister Lee Hsien Loong, since June 14. Follow the full timeline of events here.

As if Singaporeans haven’t been left confused by the information overload, LHY now claims that the ministerial committee had refused to list the options it was considering for 38 Oxley Rd.

LHY referred to a “vague paragraph” from Minister for National Development Lawrence Wong on Aug 24, 2016, which explained why the committee had been set up in the first place. But LHY wasn’t pleased with his answer.

This was what Mr Wong said:

He highlighted that Mr Wong had avoided confirming if 38 Oxley Road being “converted to a park” was an option that the committee would consider.

On Dec 20, 2016, LHY and his sister Lee Wei Ling (LWL) wrote back, requesting for information such as the identity of the other members of the ministerial committee, and the other options that the committee are presently / will be considering. 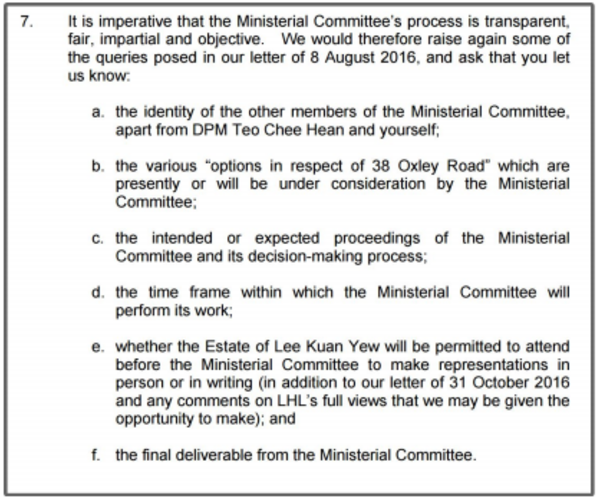 The siblings wrote again on Feb 28, 2017. They added that they did not see anything controversial with their requests, and it was only fair that they get an idea of how the ministerial committee functions. 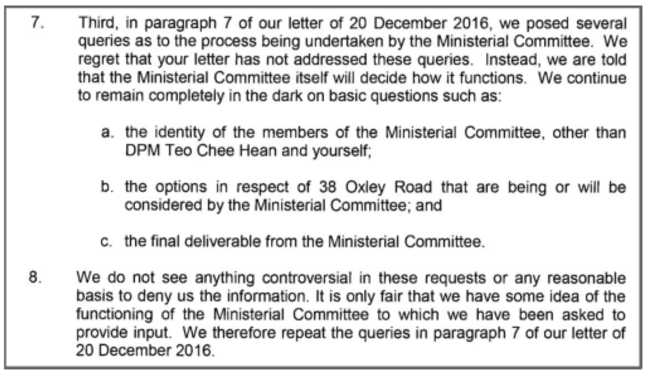 No answers were given in response to their queries, LHY said.

He also described the ministerial committee as “mysterious” and an “extra-judicial secret attack” on the late Mr Lee’s wish to demolish the house and an attempt to discredit our founding father’s final will.

However, in a response to LHY’s allegations, the press secretary of Deputy Prime Minister Teo Chee Hean released 2 letters sent to LHY and LWL in 2016 that apparently show that the ministerial committee had actually responded to LHY and LWL, seeking their views on 38 Oxley Road.

Ms Lee May Lin also responded in a statement, saying that LHY’s Facebook post was a “selective and inaccurate” account of the correspondence between the siblings and the ministerial committee, which is chaired by Mr Teo.

The released letters, which are dated July 27 and Aug 24, had clarified the “purpose and scope” of the committee’s work, said Ms Lee.

See the letters here, as well as the response from Ms Lee: 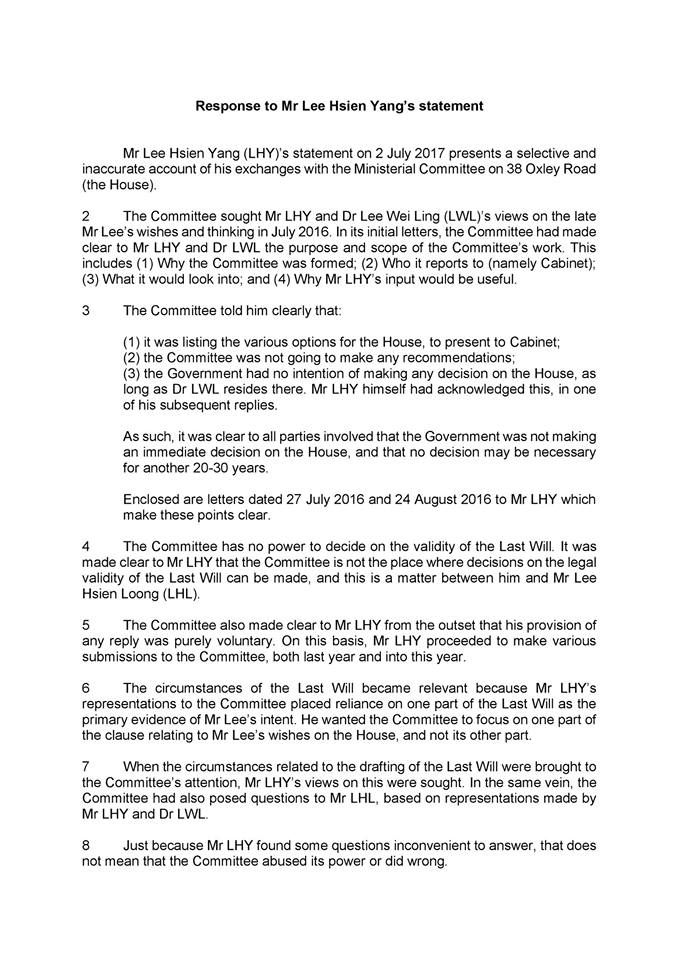 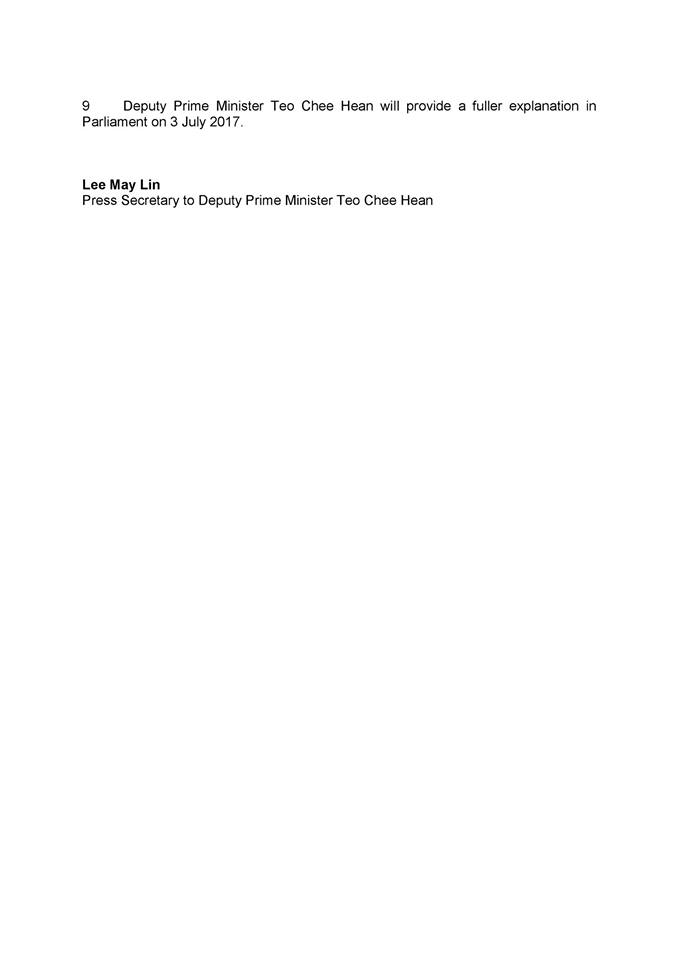 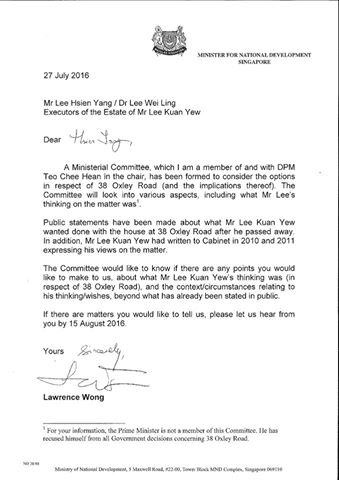 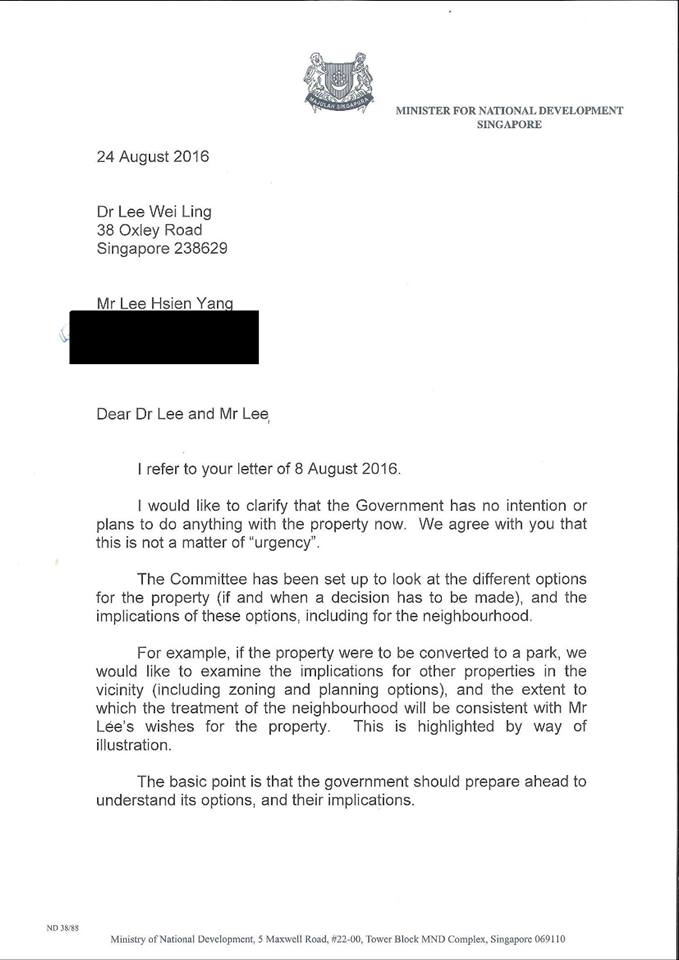 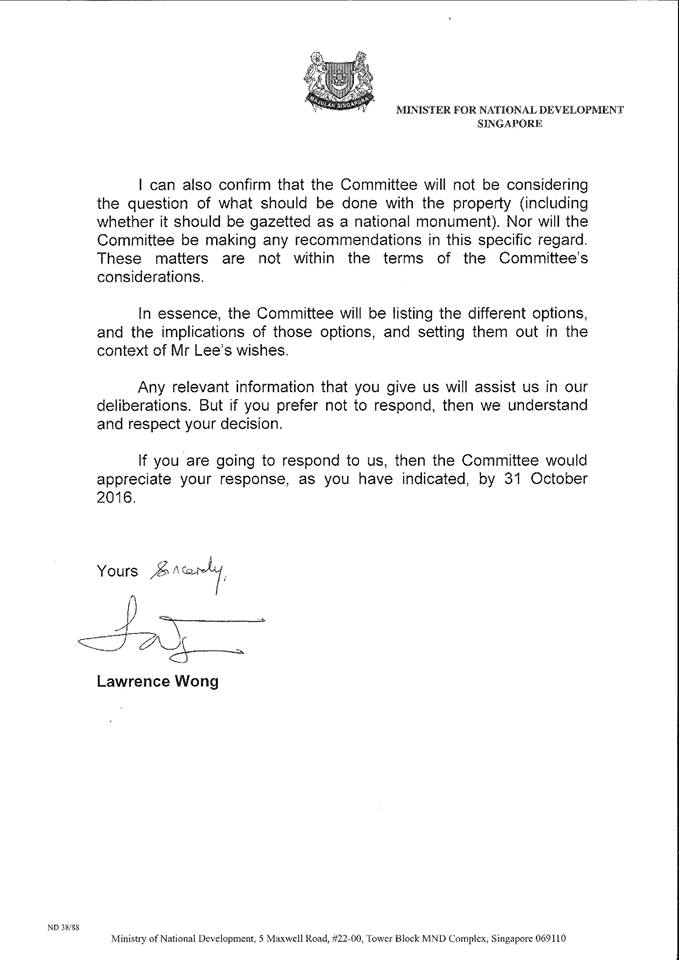 Why LHY Is Speaking Up

LHY’s Facebook post on Sunday followed one on Saturday (July 1), where he uploaded a 3-page pdf file explaining why he decided to speak up about the dispute that has made international headlines. 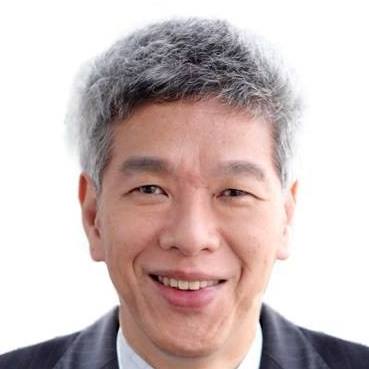 The youngest child of Mr Lee clarified that he has always avoided public attention, is not a politician and never desired to be one — in fact, had never posted on Facebook until this dispute, he said.

When I reach out to Singaporeans, please bear in mind that I am a novice. I have neither brigades of staff nor teams to back me up. Indeed, until this episode occurred, I had never posted on Facebook. As such, I ask for your patience – I am only a man working to honour his father’s wishes.

Here’s the full pdf file in case you can’t open it. 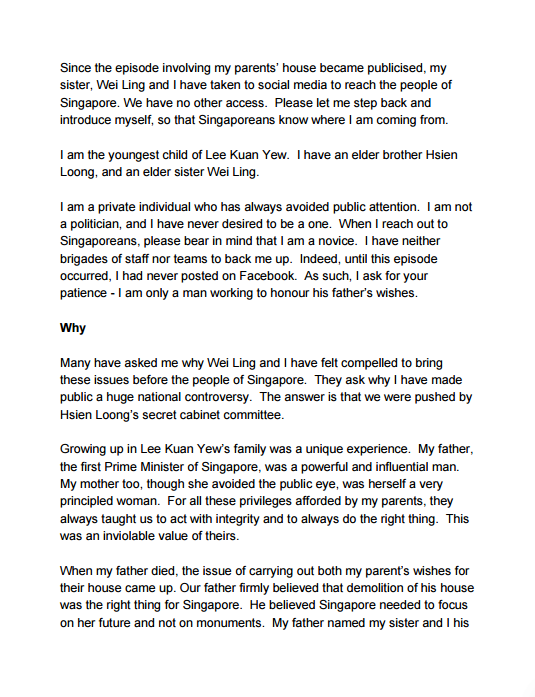 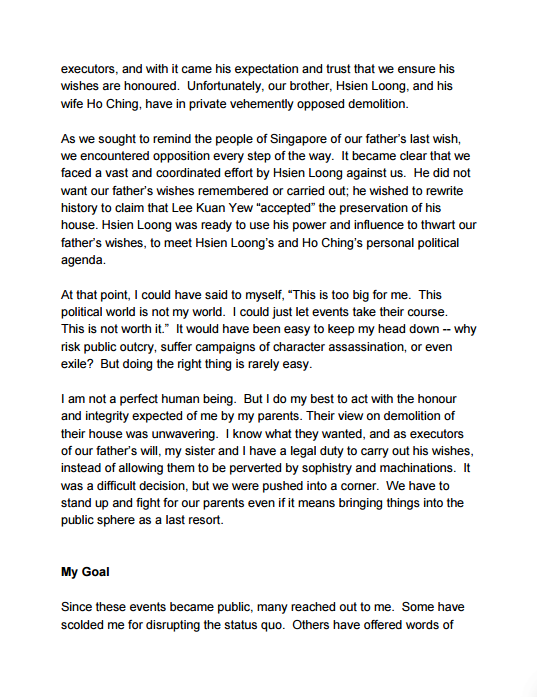 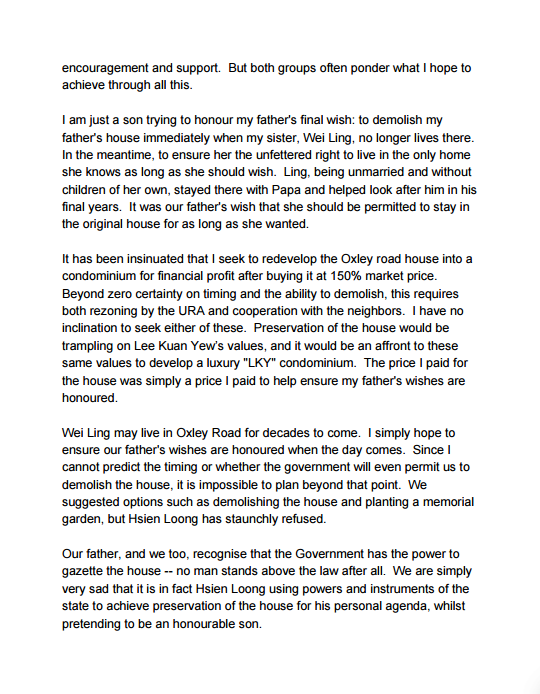 Not After Financial Profit

As LHY had bought the house at 150% its market price, there have been questions if he is insistent on it being demolished as he seeks to redevelop it into a condominium for financial profit. 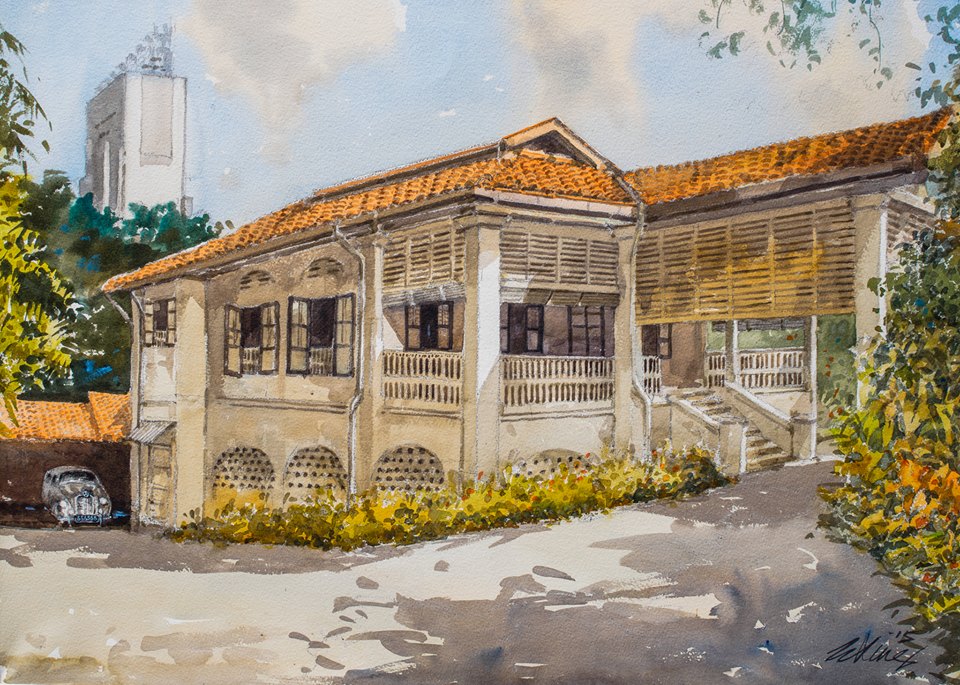 Beyond zero certainty on timing and the ability to demolish, this requires both rezoning by the URA and cooperation with the neighbours. I have no inclination to seek either of these.

LHY also said he wishes to see their father’s wishes honoured the day his sister, who is unmarried and without children, stops living in the house. However, he said:

Since I cannot predict the timing or whether the government will even permit us to demolish the house, it is impossible to plan beyond that point.

He added that his brother had staunchly refused options such as planting a memorial garden in place of the house, and alleged that he is saddened that his brother is using his powers and instruments of the state to preserve the house for what he called “his personal agenda”, all while pretending to be an honourable son.

Two Sides To Every Coin

While LHY has stepped out to deliver a personal view on the issue, and why he and his sister had made the dispute public, it is important to remember that there are 2 sides to every coin.

And PM Lee will address his side of the story on Monday (July 3).

We anticipate the parliamentary sitting, and hope that questions about the house and his alleged misuse of power will be answered — however, we also are prepared for the possibility that it won’t resolve anything since LHY and LWL won’t be there.