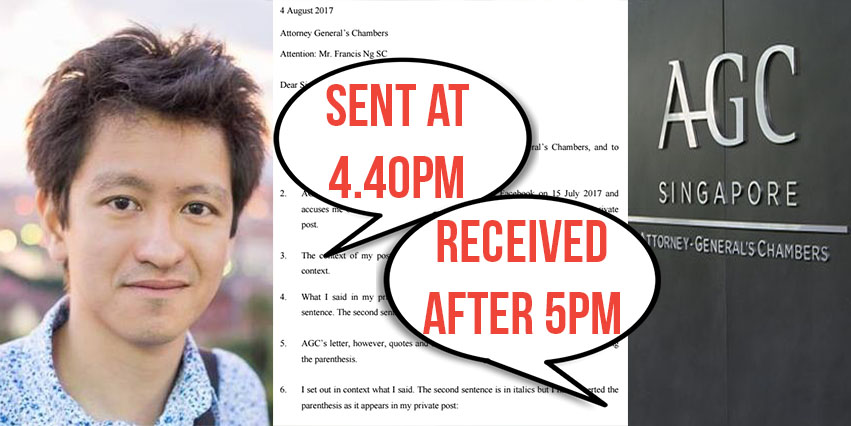 Mr Li Shengwu, a junior fellow at Harvard University, is in the United States waiting to be charged for contempt of court.

Meanwhile, he is still posting on his Facebook profile, quibbling with Singapore’s Attorney-General’s Chambers (AGC) over exactly what time he sent a reply to them over his offending “friends-only” Facebook post made in July 15.

How did all this happen to the grandson of founding father Lee Kuan Yew?

On Sunday (Aug 6) morning, Mr Li, 32, published a short Facebook post, set to public mode, that claimed the AGC wasn’t accurate as to when they received Mr Li’s letter on Aug 4.

The son of Mr Lee Hsien Yang and nephew of Prime Minister Lee Hsien Loong cited a report from The Straits Tines that quoted an AGC spokesman as saying that the AGC got the letter only after 5pm on Aug 4 — after a deadline that was extended for him.

He’s disputing that, saying that he delivered the letter to the AGC at 4.40pm, and he has proof.

UPDATE: After receiving no response from the AGC or The Straits Times over his latest post, Mr Li’s aunt Lee Wei Ling wrote a Facebook post of her own on Monday (Aug 7), questioning why that was so, considering how fast they responded previously.

The letter that both the AGC and Mr Li are talking about is a 5-page reply from Mr Li to the AGC over his July 15 post.

A letter that Mr Li made public on his Facebook page on the evening of Aug 4, but wasn’t sent to the mainstream media by the AGC.

It’s a lengthy letter, so here are some of the points that Mr Li made in it:

Mr Li says the AGC took his July 15 post out of context. To jog your memories, here’s the post that’s the cause of part 2 of the Lee family saga. The word that the AGC has taken issue with is the word “pliant”, which appears in the 2nd paragraph of the post, inside the brackets.

Mr Li noted that the 2nd paragraph is in brackets, and contends that viewed in context, his use of the word “pliant” isn’t contempt of court.

However, the AGC has said that it is. According to a letter it sent Mr Li on July 21, it said his use of the word “pliant” has a “clear meaning” — that the court is not independent of the Government:

Mr Li, however, denied this. He said that he merely meant that Singapore’s legal system has different legal rules with respect to press freedom, compared with the US, meaning the courts have “more flexibility to find the press liable for defamation”.

He also defined the word “pliant” as “flexible, supple, or adaptable”, compared with the word “compliant”, that means “easily influenced or yielding”.

And he even gave an analogy, saying that to say that Singapore’s medical system is inefficient does not mean its doctors are lazy or hospitals incompetent:

However, an unknown person who is not on his friends list mysteriously managed to obtain a screenshot of this post, and posted it publicly, whereupon it was reproduced by the media.

Mr Li said he did not authorise and would not have authorised such a public dissemination of his private post.

However, the AGC has said that it’s Mr Li’s fault the private post ended up publicly disseminated — he should have foreseen that this would happen.

Mr Li expressed discontent with several of the media’s actions in this saga, including:

a. He said the screenshot of the private post was widely reported on by the mainstream media, who did not approach him for verification or clarification.

b. Instead of interviewing him, the mainstream media reported on comments by Senior Minister of State for Health and Communications and Information Chee Hong Tat and the AGC about the post.

The media also released articles based on Mr Chee’s comments and a statement from the AGC that it is “looking into” the post — which resulted in his post garnering more attention than it would have drawn, considering that it’s a private post.

Essentially, it seems that the mainstream media is more responsible for the private post gaining public attention, than Mr Li himself.

c. The mainstream media reported that the offending post was “taken down”, when it was not taken down. Rather, the media could not see the post because it was set to “friends only”, and they could have assumed that it was taken down.

Whatever Mr Li said in his long reply to the AGC, it doesn’t seem the AGC was moved.

According to The Straits Times, the AGC merely said that the letter “does not purport to comply with our letter of demand that Mr Li purge his contempt and apologise”. It also said that it will put the letter before the court.

So what did the AGC want Mr Li to do before the deadline of Aug 4, 5pm?

This is the letter the AGC wanted Mr Li to sign:

Mr Li says he has not deleted the controversial July 15 post (he says he’s merely amended it to make it clearer, but it’s still there and set to private mode).

Neither has he accepted that his post was wrong, or in contempt in any way.

Thus, it stands to reason that he probably hasn’t signed the above letter.

Instead of that apology letter, Mr Li sent that defiant 5-page reply to the AGC — whether or not he sent it before 5pm on Aug 4 is actually irrelevant.

Thus, the AGC has started proceedings against Mr Li for contempt of court:

Do you think Mr Li is justified in being so defiant, and not doing what the AGC wanted him to do? That depends on whether you agree that his use of the word “pliant” in his post was in contempt or not.

It also depends on whether you think he should have foreseen that his private post would be widely reported on by the media, giving it a life of its own.

For now, Mr Li has told Reuters that he has “no intention” of returning to Singapore. And with this potential court case looming over his head, who would blame him?

Read our story about the 38 Oxley Road saga for some background of what went on before.