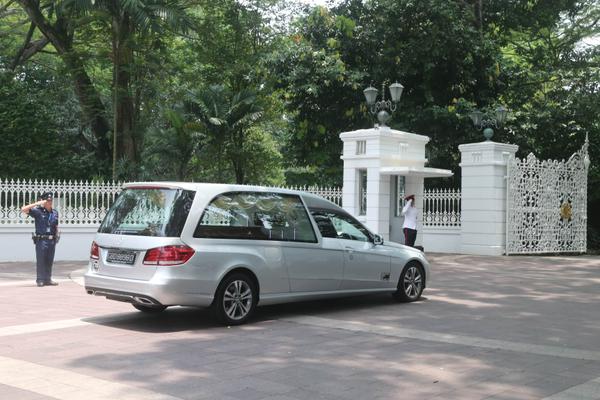 Below are a few compiled videos and pictures of the moment.

Went with my mum to the Istana to pay respects. Outpouring of emotion as Lee Kuan Yew's casket enters the premises: pic.twitter.com/a3C9QJMJs9

#LeeKuanYew 's body arrived at the Istana at about 1254pm on Monday to a waiting crowd pic.twitter.com/KViZFZC3XL

That’s quite a sizable crowd for a Monday.

The hearse carrying the late Lee Kuan Yew's body has arrived at the Istana. #RIPLKY pic.twitter.com/zLrLY0JCqT

Lunchtime crowd queuing up to write condolences outside The Istana. #RIPLKY pic.twitter.com/GqpaLeHvsF

Oh look, the two girls in front are in these shots too:

Members of public queuing with bouquet of flowers, condolence notes at the Istana #LKY pic.twitter.com/EidJMzfgHD

While such occasions is normally sombre, with mourners not showing emotion, there was some cheering and clapping observed in appreciation of Mr. Lee as the car carrying his body drove into the Istana.