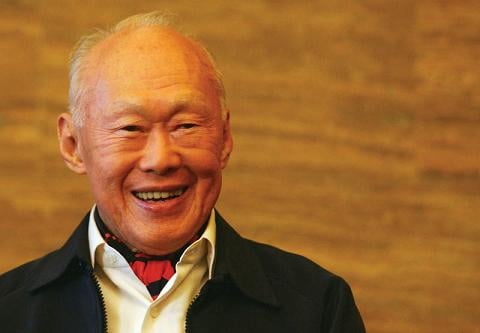 Mr. Lee Kuan Yew was a selfless leader. A visionary. A strategist. A respected statesman. A captivating orator.

He was an extraordinary man. But he was also only human. Unbeknownst to many, he was mildly dyslexic.

Of course, the condition was no deterrent to him.

I went through life and I overcame it. When I did a course on speed reading and I did not succeed, not because I was stupid because I usually have to run my eye back, make sure that I got the right word. That slows me down, but because I read more slowly, I read only once and it sticks, so there are compensations. The important thing is, not to be discouraged and feel that I am disabled, no! Leonardo da Vinci was dyslexic, so what? He was a great artist, sculptor, painter, thinker… so. I’m not comparing myself to him. But if he can overcome dyslexia… fortunately, I overcame it without my knowing it…

In 1996, then-Senior Minister Lee’s neurologist daughter, Lee Wei Ling, diagnosed the elder statesman with mild dyslexia. This diagnosis came she discovered she had dyslexia herself. It was later confirmed by a British expert.

Lee Wei Ling had found out in Primary school that she had some difficulties spelling in English, although the same problem did not occur when reading or writing in Chinese. Despite this, she topped her class in medical school and acquired two postgraduate degrees, but the diagnosis only came when she was undertaking postgraduate training in paediatric neurology at Harvard University.

I am pretty proud of him, all things considered…(he) had complained that (he) could not read fast without missing important items.

This revelation was part of an announcement that the royalties for Mr. Lee’s new CD about his life would be donated to the Dyslexia Association of Singapore (DAS).

Mr. Lee was fluent in many languages – English, Malay, Chinese and Japanese.

As an adult, he learnt Japanese during the Japanese Occupation, and worked as a Japanese translator.

At the age of 32, Mr. Lee relearnt Chinese – a language he had to master once more due to the lack of use. He published a book thereafter, Keeping My Mandarin Alive: Lee Kuan Yew Language Learning Experience, about his journey in re-mastering Chinese, to encourage younger Singaporeans to learn and speak their mother tongue.

He published Keeping My Mandarin Alive in 2005.

In 2011, My Lifelong Challenge Singapore’s Bilingual Journey about the struggles of adopting bilingualism in multiracial Singapore and Hard Truths to Keep Singapore Going, a questions-and-answers book based on 16 interviews in 2008 to 2009, were released.

In 2013, he published The Wit and Wisdom of Lee Kuan Yew, which contained nearly 600 quotes condensing Mr. Lee’s opinions on a range of topics regarding Singapore and the world. The same year, One Man’s View of The World, about his experience and insight to offer opinions on the contemporary state of the world and 20 years on, was launched.

Mr. Lee and his family gradually became more vocal about being dyslexic, and contributed to the DAS. In an interview with the New York Times, he opened up about his grandson who had dyslexia.

In a separate address to the Singapore American School (SAS), he said:

I also had a grandson who could not fit into our schools. He had an IQ of 140, so he is not a stupid boy. But he was having trouble. His brother was scoring and he was not because he was dyslexic and he had to learn two languages – English and Chinese.

So, the Education Ministry allowed him to opt out of the system. We did not have the specialist teachers to cater for people like him. He joined the SAS and at your school, your teachers helped him cope with his dyslexia and in the process restored his self esteem and confidence, and he’s done well. Your staff support the American community and they have brought benefits to Singaporeans. Thank you.

After Mr. Lee revealed his dyslexia, the chairman of DAS noted that “now that SM Lee has admitted to having dyslexia, the stigma is removed and parents will no longer think that it is something to be ashamed about”.

Indeed, kudos to someone of Mr. Lee’s stature to have admitted to having dyslexia, a reading disorder long associated with negative connotations. The disclosure about his dyslexia helped to circulate knowledge of dyslexia to members of the public, eradicating prejudice towards dyslexics. His impressive achievements and contributions to the nation would serve as an inspiration to dyslexics endeavouring to overcome their learning differences. #RIPLKY