War Of The Taxis 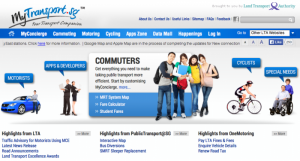 Ever since Uber and GrabTaxi took over the island last month, cabbies have been in a bind. No one’s booking their services, so the LTA has upped the ante with their Taxi-Taxi@SG app. Perhaps it’s great timing, or perhaps it’s foresight—Uber has waived its booking fares till 7 December.

What’s So Great About This App?

Well, commuters can easily see the number of taxis nearby, and let taxi drivers know where they are. Taxi drivers can also use this app to look for potential customers as well.

If you’re on public transport, you can use the journey planner feature to map out the shortest route (don’t, we already have Google maps?). There’s also a journey planner function that helps bus commuters reach their destinations by showing the number of stops remaining.

Can It Compete With The Others?

We’re not sure how this app will fare, and it seems like Uber and GrabTAXI have gotten the magic formula right—many people are flocking to their apps instead of calling a cab, stating that Uber is so much cheaper. It probably is too late for this app—unless the LTA comes up with a way to keep customers coming, savvy SIngaporeans will use cheaper available options.

With reference to CNA
Featured image via MyTransportSg