Must Share News – Independent News For Singaporeans
Home News SMRT Is Supposed To Provide Updates For Train Delays Of More Than... 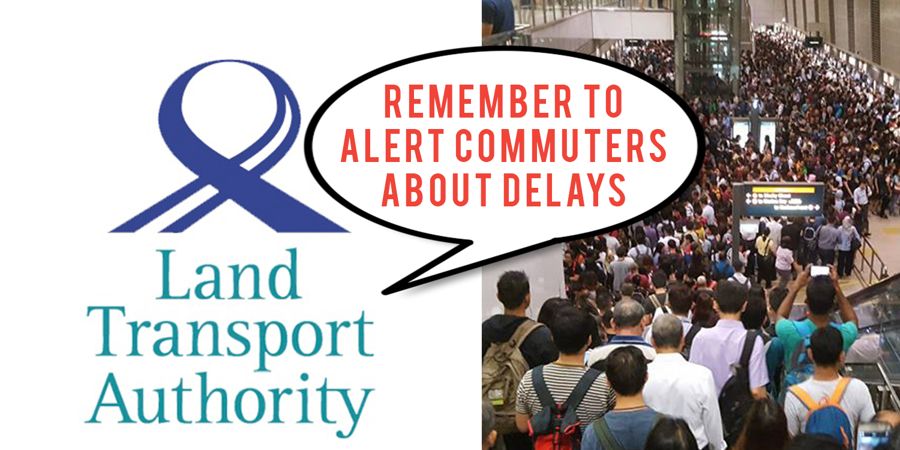 What’s worse than daily train disruptions? Not being informed about the delays.

Train breakdowns have become a common feature of commuting in 2017. However, LTA has now found the media teams of rail operators similarly guilty of communication breakdowns with the public.

Since train operators have held their tongues on train delays, commuters have mostly taken to social media to complain.

Land Transport Authority (LTA) has finally taken action to address these complaints, by issuing a reminder to train operators to inform passengers of service delays on 30 Nov.

But how effective will this belated warning be?

LTA will be watching

In a report by ST, the LTA said that train operators are required to tell passengers of any service delays that will exceed 10 minutes “through train and station announcements as well as via mainstream and social media”.

A spokesman from LTA shared that the governing body has “received feedback from commuters on rail operators’ public announcements during service delays, and will be looking into this matter”.

While this might bring some relief to commuters, we aren’t quite sure if LTA’s clampdown will yield significant results.

After all, this is not the first time that the LTA has intervened on the behalf of commuters.

Back in 2012, a Community of Inquiry (COI) was created to look into train disruptions that occurred in 2011.

In a press release by the LTA, the COI had recommended that SMRT “improve communications and information dissemination to the public”.

In response to the COI’s recommendation, SMRT announced that they had introduced a “dedicated communication team” to relay timely messages to commuters on various platforms like Twitter.

Now you might be wondering why we chose to bold those two words. Well, it’s because “dedicated” and “timely” are hardly adjectives that are synonymous with SMRT’s Twitter account.

There have been many occasions when SMRT’s Twitter service went silent and failed to update commuters on train breakdowns.

To be fair, SMRT has provided updates at times. However, netizens have complained that they have been inaccurate.

Communication requires U and I

Speaking to ST, Mr Patrick Nathan, vice-president for corporate communications at SMRT, said that the train service provider recognises the need to update commuters of delays.

He added that SMRT will adhere to the rule of alerting commuters when delays are at least 10 minutes long.

The train provider has also released an update to existing travel app SMRTConnect which will allow commuters to check how long disruptions will last for.

As for whether this will prove to be accurate or useful, one can only guess. Let’s just hope that the team responsible for providing the details is not SMRT’s Twitter team.

A word of caution if they should fail — commuters will definitely be calling for LTA to mete out harsher punishments at dedicated and timely intervals too.