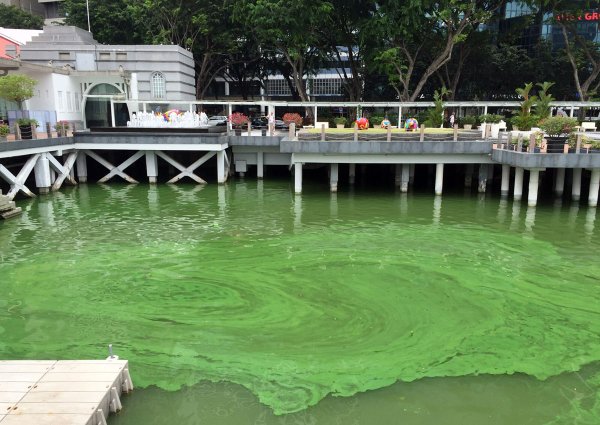 Singapore is synonymous with being a clean and green country, however things got a little greener than usual at Marina Bay.

A thick layer of algae caused the waters of Marina Bay outside the Fullerton Bay Hotel, NTUC Centre and the Promontory to have a rich emerald green colour.

Experts have linked the happening to a combination of hot sun and heavy rain.

What could have caused the problem

A doctor from Nanyang Technological University Earth Observatory of Singapore research, claimed the incident was caused by the downpours occurring over the past few weeks. The heavy rains led to more nutrient run-off from land encouraging algal bloom.

Given Singapore’s “kiasuness” over such issues, more tests will be carried out in the coming weeks to determine the exact cause of this phenomenon which puzzles Singaporeans.

In an effort to calm citizens of Singapore, Public Utilities Board (PUB) said algae growth exists naturally in Singapore’s waterways.

If left untreated, algal bloom may clog the gills of fish, resulting in death.

Action needs to be taken

In Oct 2015, a Stomp reader who wrote in after capturing a similar happening of algae in the waters of Marina Bay.

Marina Bay needs to clean its act up fast or they will find their visitors moving on to GREENER pastures.

With reference from The Straits Times
Featured image via Twitter