Must Share News – Independent News For Singaporeans
Home Lifestyle 5 OG Mascots For Public Campaigns In Singapore Who Rival Parley The... 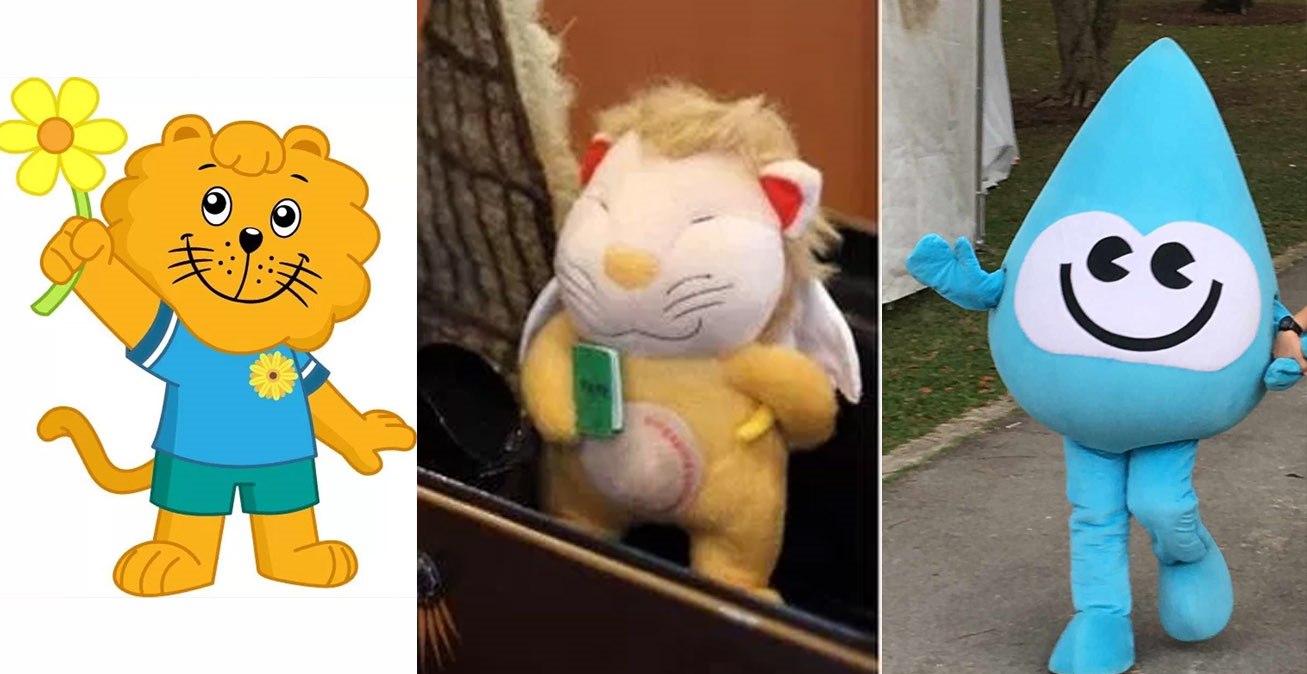 OG Mascots In Singapore Besides Parley The Winged Lion

He’s a winged lion who zips around and does “weight training with [his] Mace and the thickest Parliament library book”. But in all seriousness, it’s pretty typical of the Singapore government to have a mascot for every kind of campaign.

In light of Parley’s launch, let’s also take a look at a couple of our iconic local mascots.

Yes, Parley is our latest edition, our local parliamentarian. 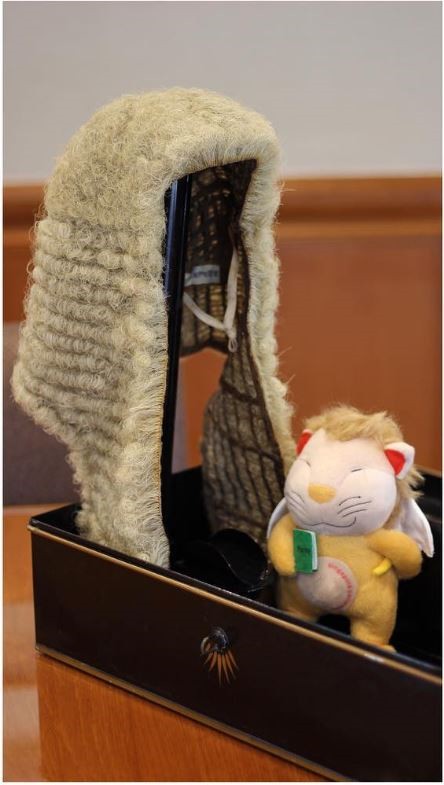 He still has baby fat and likes to read Hansard reports, making him sound like our typical geek.

His role is to impart a little knowledge of Parliament – its history and workings.

He is also an all-rounded individual, with a taste in music, a passion for photography and a love for reading.

In particular, he likes Ed Sheeran’s Shape Of You and Michael Learns To Rock’s 25 Minutes.

His top reads include To Kill A Mockingbird, The Da Vinci Code and The Singapore Parliament: The House We Built, by Harper Lee, Dan Brown and Sumiko Tan respectively.

Not only do his hobbies put him in good stead, he even manages to be born at a time of significant political leadership changes.

Another burning question is if he is to be another mascot we will soon tire of.

Now, time for the other mascots, in chronological order.

Singa the Lion is a familiar icon. Having resigned only in 2013, many of us still easily recognise him. 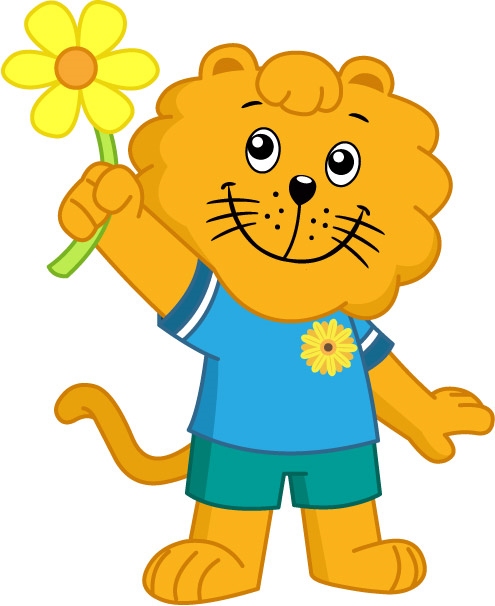 Singa quit his job as our kindness ambassador, saying,

I’m just too tired to continue facing an increasingly angry and disagreeable society. 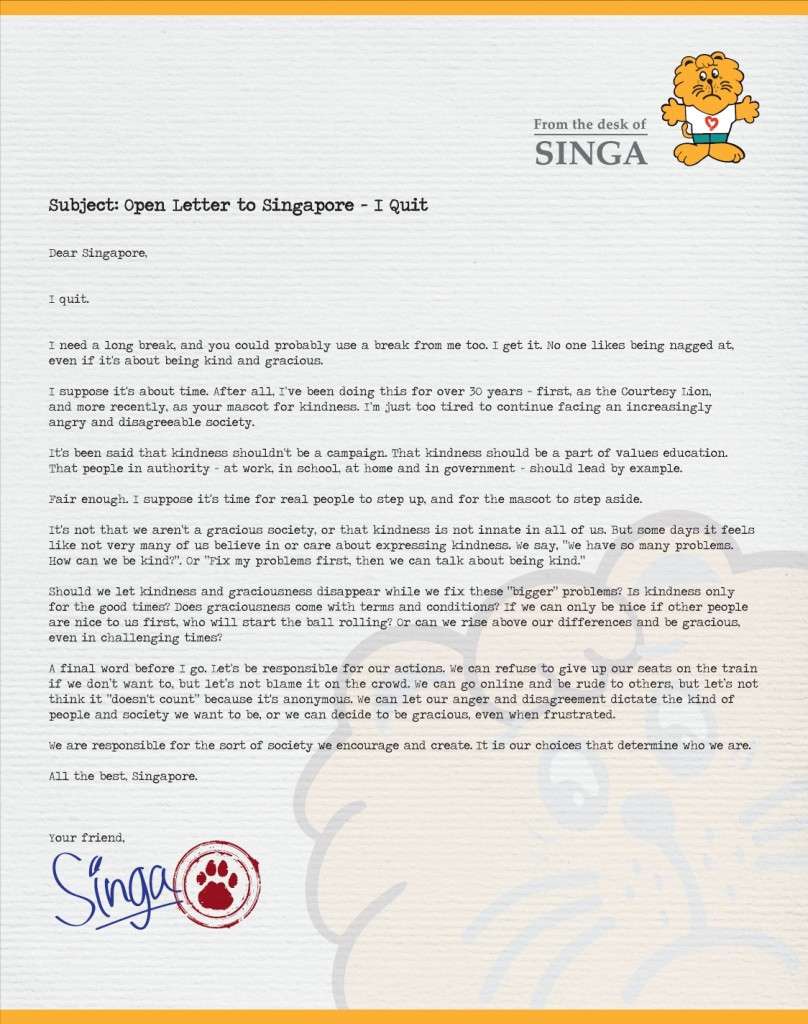 What happened? At the time, a Singapore Kindness Movement (SKM) survey indicated that Singaporeans were the least gracious they had been in 5 years.

There was also the sentiment that Singa was dwindling in relevance.

Now let’s consider if Singa succeeded in what he was meant to do.

It’s near impossible to quantitatively measure “kindness” due to its intangibility. But Singa’s resignation immediately prompted a conversation about kindness.

Less than a month after he resigned, over a hundred related articles about kindness in Singapore were published.

Nevertheless, some people are less convinced.

Ms Ang Swee Hoon, associate professor at the National University of Singapore, believes that while Singa is an icon, he remains plagued with an inherent flaw,

People can associate bees with being industrious. There needs to be a tighter connection. What does a lion have to do with kindness?

A question that resident winged lion Parley may want to look into?

Teamy the Productive Bee was launched in 1982, it fronted the National Productivity Movement created the year before. 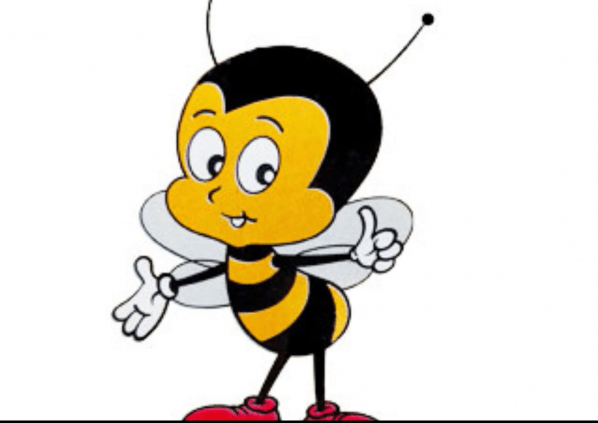 The movement was intended to raise productivity in order to move the economy from a labour-intensive one, to highly-skilled and technology-driven economy.

The recession mark[ed] the end of an era of high growth and relatively easy progress. It shows the uncertainties…of an economy that is overwhelmingly dependent on international trade.

Thus the impetus to move to high-value industries.

The campaign was overall a success — the local economy was quickly recovering by mid-1986, and grew at 3.8% in the third quarter of 1986.

How much of which can be credited to this busy bee, we can’t say for certain of course.

Captain Green came to life in 1990 to encourage Singaporeans to adopt clean and green lifestyles. 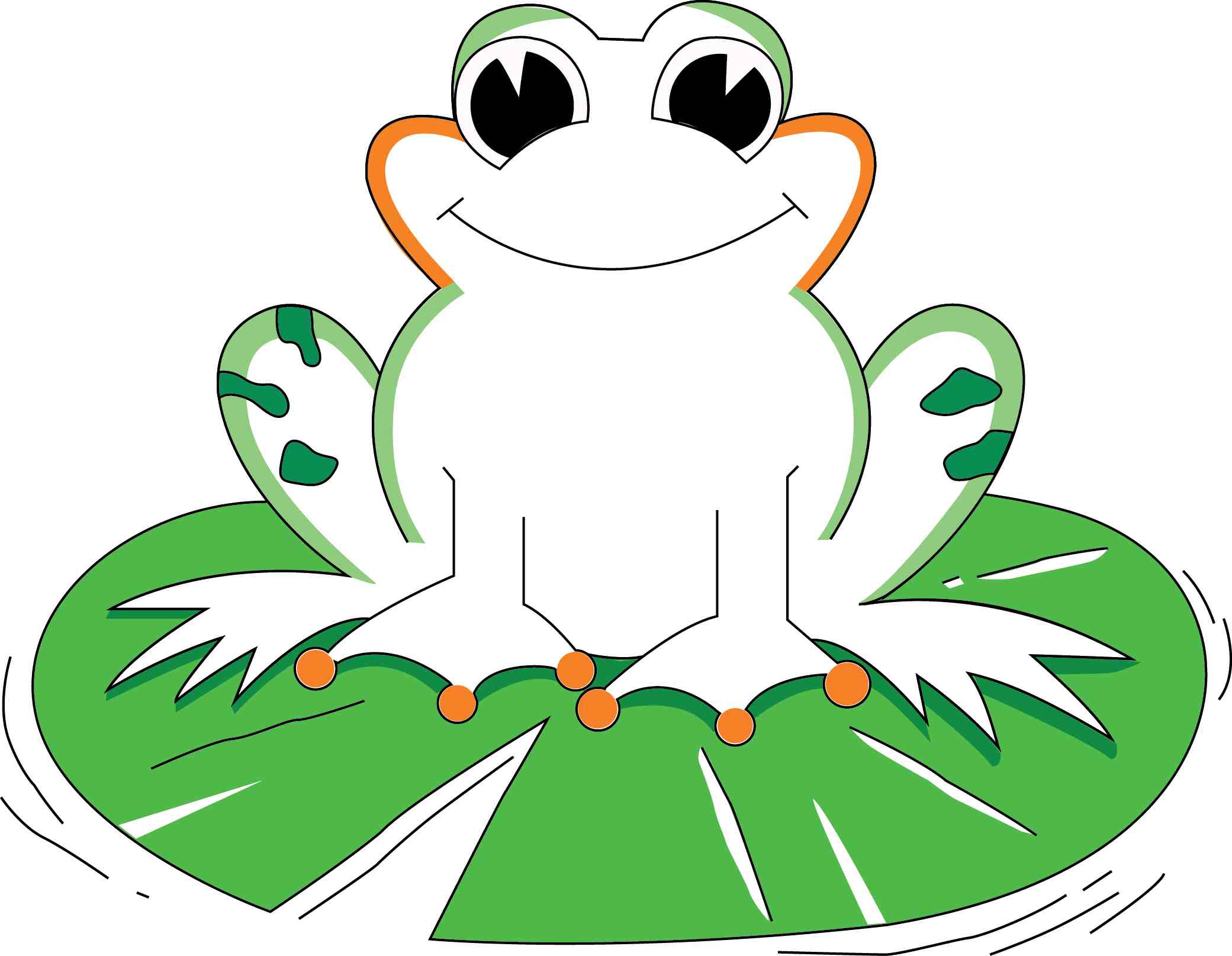 He carried huge responsibilities, arriving amidst international concern for the environment.

Back at home, Singapore Green Plan was initiated, while a United Nations Conference on Environment and Development to0k place two years later.

The purpose behind the campaign was apparently to protect the environment while chasing economic growth.

His legacy lives on, and today, he has a new job as a normal frog in the book series, Adventures with Captain Green.

Water Wally made waves when he was spotted sticking his big head into the shower room of a young boy. 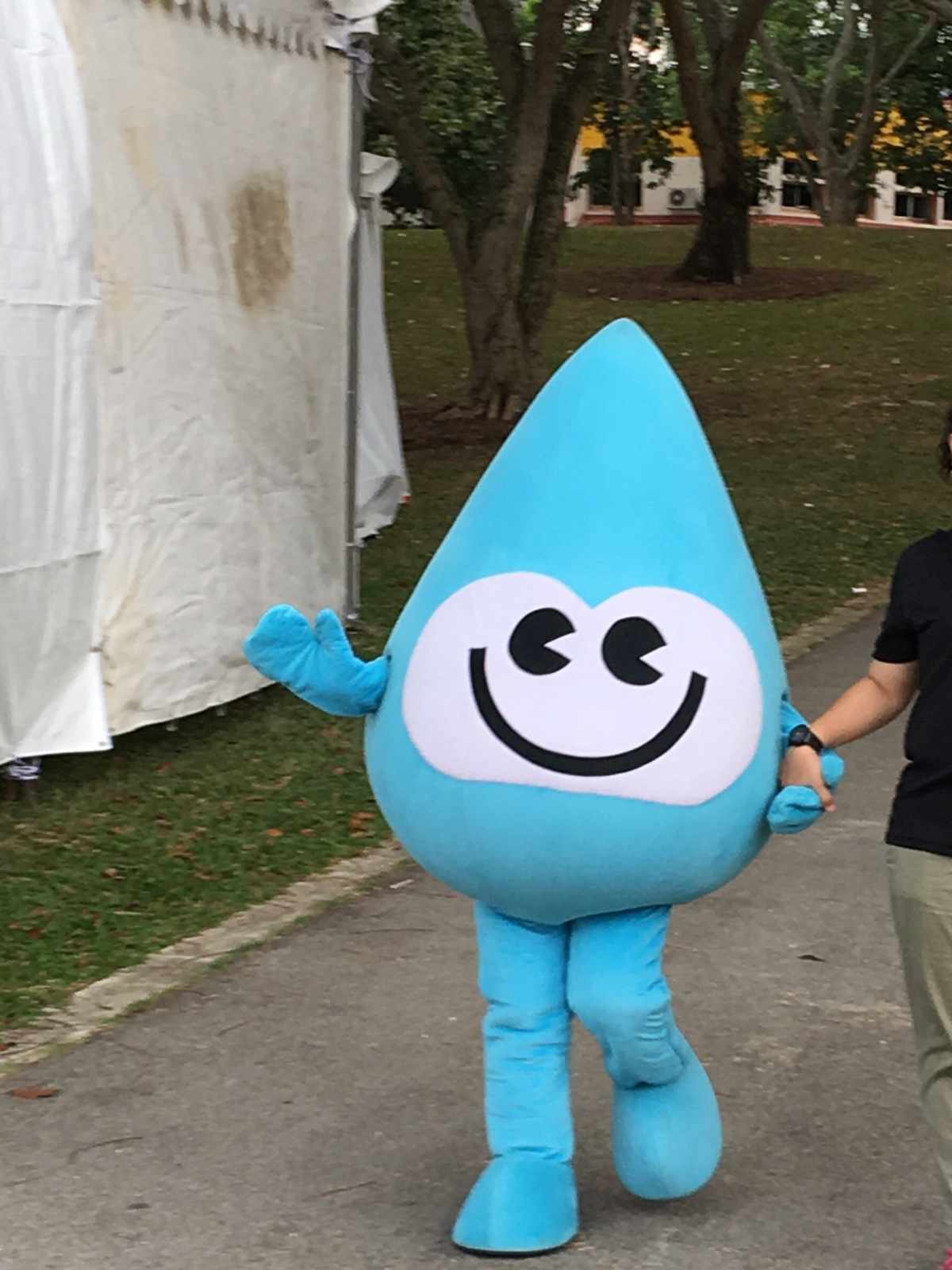 Launched in 2005, he was the face of a campaign encouraging Singaporeans to conserve water and show more appreciation for our water sources.

In his campaign, he was featured in many videos. Unfortunately, a particular ‘Shower Dance’ did not go down well with all Singaporeans.

I watched it twice myself, then showed it to all my friends as yet another example of bizarre state efforts to be cool.

Those were not his only misfortunes.

His campaign make the public take water scarcity seriously was impeded because of the launch of NEWater in 2002.

Water scarcity, or so an overwhelming majority of Singaporeans agreed, was no longer considered a pressing issue.

But while adults were probably more cynical, Water Wally was also a familiar fixture in schools.

He raised awareness among the young, whereas devices such as automated meters likely made a larger impact among adults.

Over the years, our mascots may have raised the ire of some Singaporeans who consider them “pretty dumb”.

However, to give them due credit, these mascots have put a face to many of our nation’s public campaigns over the years.

Love ’em or hate ’em, our OG mascots will be remembered for both the good and the bad.

Guess memorability is some measure of success too.