Must Share News – Independent News For Singaporeans
Home Current Affairs We Analyse Mainstream Media’s Coverage Of The PE Candidates To See If... 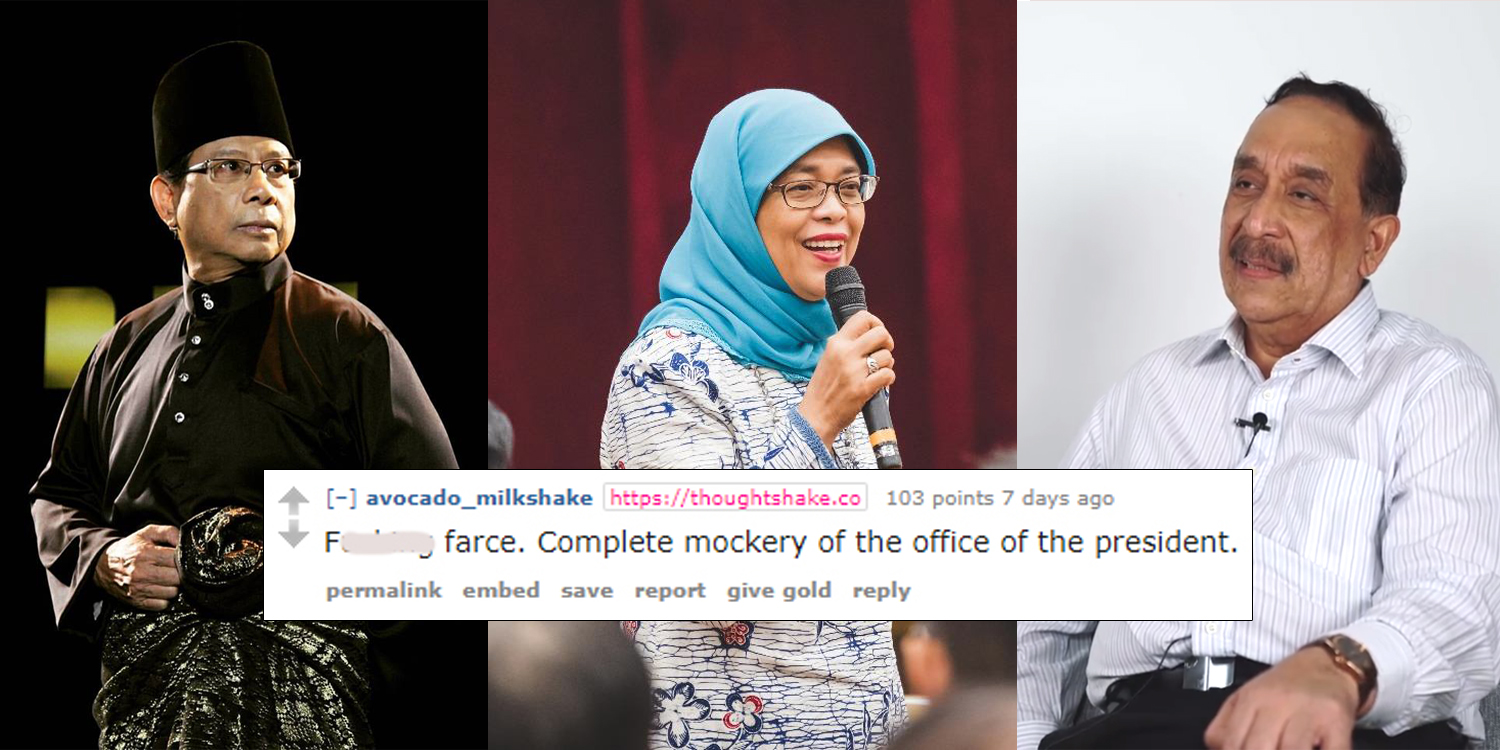 Coverage Of The Presidential Election 2017

Unless you’ve been away from Singapore or spent the past few months without Wi-Fi, you must’ve heard about some of the controversy surrounding the upcoming Presidential Election.

Talks about the election being a facade with Dr. Tony Tan’s successor having been pre-selected and vetted by the government resonate throughout Singaporean spaces on the Internet. Today we’ll be discussing something different.

What’s the first thing that comes to your mind when you think of the upcoming elections?

Good, now how many of you are able to name the remaining candidates? Anyone?

Is this truly the case? Let’s take a further look.

A Look At Mainstream Media

Check out this article published by Channel NewsAsia on Farid Khan. 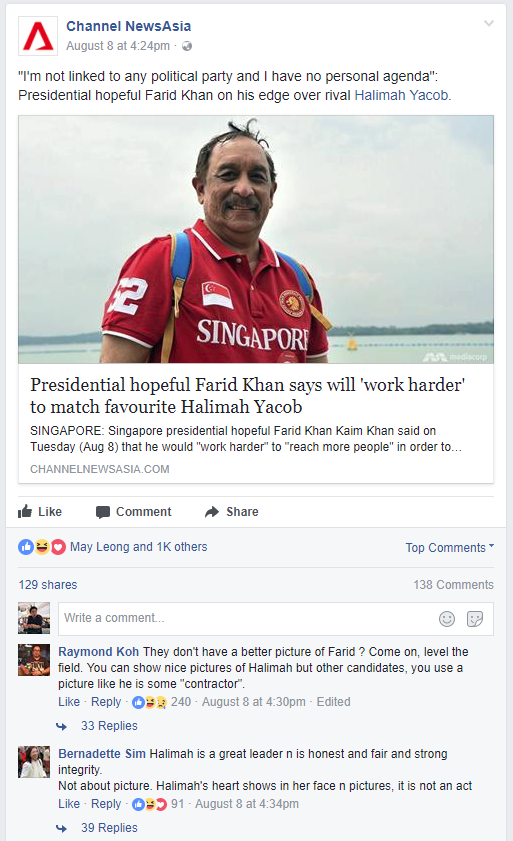 Take a look at the top 2 comments.

The first mentions how CNA unfairly uses a “regular” photo of Mr. Farid Khan as compared to the one they used for Madam Halimah Yacob, which looks positively presidential: 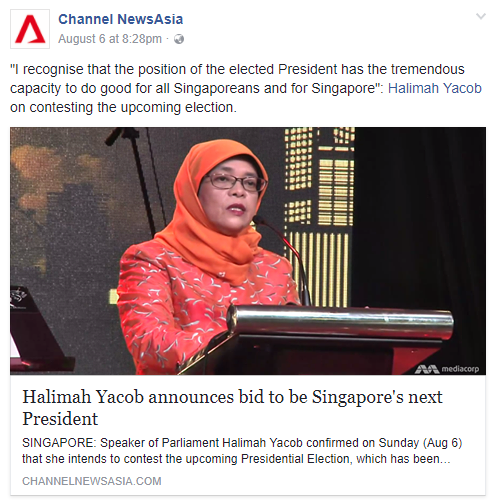 The second, oddly talks about the leadership qualities that Madam Halimah possesses. We’ll touch on this further down the article.

Are these concerns of netizens over preferential treatment by the mainstream media justified?

We at MustShareNews delved deeper into the websites of The Straits Times, Channel NewsAsia, and Today Online to find out more.

A search on the Straits Times for each of the 3 potential candidates brought up the following numbers of articles in which they were featured over the past year:

CNA brought up 7 and 4 results respectively when searching for “Farid Khan” and “Salleh Marican”. 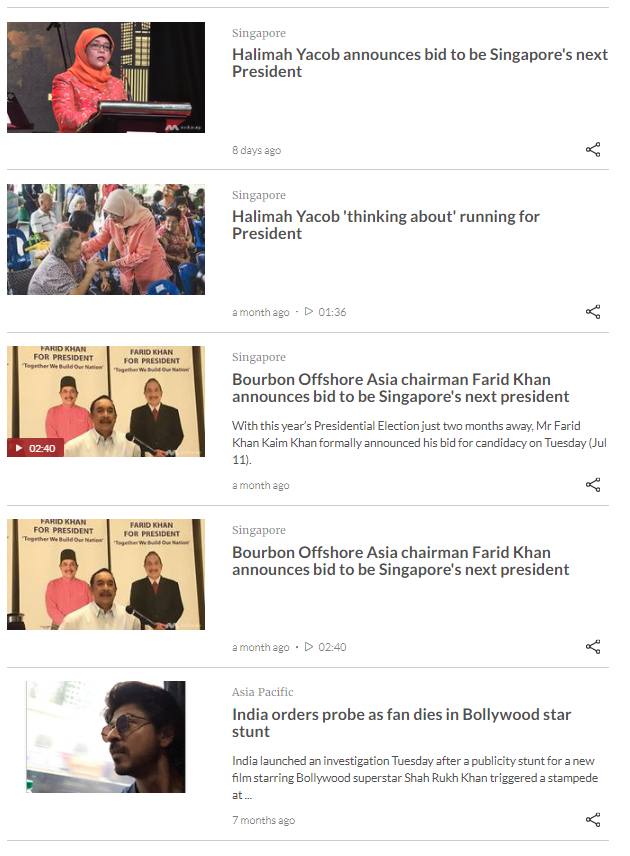 2 of each of the results aren’t even related to the individuals.

Perhaps there is truth to the media not providing adequate coverage for presidential candidates not named Halimah.

However, before we jump to conclusions, we conducted a similar search on crowd-sourced media platforms to find out if this level of coverage was proportional to the public’s interest levels in the candidates.

We Gauged Interest Levels On Hardware Zone and Reddit Singapore

On local forum Hardware Zone, a search based on relevance came up with the following:

This result is consistent with that of mainstream media, and shows that netizens aren’t interested in the male presidential candidates.

Surprisingly, a search on Reddit Singapore drew a more even result, with Halimah resulting in slightly more than half a page of results whereas Farid and Salleh drew less than half a page combined.

However, it’s important to note that all posts concerning the latter 2 contained less than 10 comments each while posts involving Halimah received an average of 57 comments.

This would indicate that there was greater online interest in issues concerning Madam Halimah.

Don’t believe us? Take a look at this innocent comment praising her qualities.

Under normal circumstances, there wouldn’t be any issue with it. However, this was one of the top comments on an article published about Mr Farid Khan.

Perhaps us Singaporeans are too quick to point our fingers and blame the media for not providing enough coverage for Mr. Farid Khan and Salleh Marican.

Maybe this unfairly-weighted representation of the presidential candidates is is a reflection of our interest, and that we, through not asking enough about the other candidates, are playing a part in what the mainstream media chooses to cover.

However, there’s also the view that our lack of interest in these candidates is due to mainstream media’s scarce coverage of them. Not many people know these personalities, and even fewer have an interest to discuss them. It is a self-perpetuating cycle that gives Madam Halimah Yacob significantly more visibility and top of mind awareness among Singapore citizens. And this is exactly what some netizens mean when they say there isn’t a level playing field.