Singapore is a treasure trove of uniquely Singaporean memes, thanks to creative local netizens.

From Win Liao Lor to Give This Guy A Medal, we’ve all seen our fair share of hilarious memes while browsing our feeds.

But have you ever paused mid-scroll on your screens to wonder where all these memes came from?

Presenting to you, the 13 most epic origins of Singaporean memes.

1. Come I Clap For You Meme

Used when: Your mother ironically shames your ‘smart’ idea or when political figures make statements that draws public ire.
Origin: PM Lee Hsien Loong’s face was photoshopped onto North Korean leader Kim Jong Un’s picture. Our best guess is that it came from the East Asia Business Council when he spoke at the leader’s dialogue session.

2. Come We Pray For You Meme

Used when: It’s exam season, the night before Toto draws or when you get 10 missed calls from your laobu.
Origin: The movie that propelled director Jack Neo to fame in 1998, Money No Enough told the tale three brothers born into poverty and how they dealt with their newfound wealth.

Used when: Overeating pineapple tarts or Ba Kwa during Chinese New Year.
Origin: An anti-gambling television commercial that aired in Singapore circa 2008. An incorrigible gambler of a father persuades his cute little daughter to hand over her pink piggy bank.

Used when: ‘Raining got ice cube’, when your friend lets you down or when your crush rejects you.
Origin: A lady excitedly describes a rare instance of hail in Singapore on national television.

This sick remix of the original interview racked up millions of hits on YouTube. Still relevant, especially since it’s #sgwinter.

5. Give This Guy A Medal Meme

Used when: A civilian goes out of their way to be hero, when someone volunteers to dabao food, when your groupmate tanks the project and you get a free A.
Origin: A May Day Rally in 2008 where Prime Minister Lee Hsien Loong addressed the rising cost of living in Singapore, in his Malay speech.

Used when: You’re feeling giggly and bored or want to pickup that handsome or chio stranger on the MRT.
Origin: Inspired by Hong Kong’s MTR puns, two female punsters came up with MRT puns based on station names. Their viral Facebook albums sparked a Meme-RT revolution in Singapore. So funny, we can’t Stevens.

Used when: The football team you bet on disappoints you.
Origin: From National Council for Problem Gambling’s video campaign. Endearing Andy expressed his hope for Germany to win, since his dad bet all their savings on Germany’s team.

Used when: You have been crushed by your crush and your only stable coping mechanism is memes.
Origin: In 2015, Goh Yong Wei posted his self-made memes on the internet. It went viral, and spoofs were everywhere on the internet. All these posts, I am still not write for you.

Used when: Your friend won’t shut up about their lame puns, or can’t stop bringing up embarrassing things you did for a chiobu.
Origin: The life-sized standees were part of the Police’s Anti-Crime Campaign to prevent shop theft in early 2015. Dubbed ‘Singapore’s most handsome policeman’, he certainly made every girl’s heart go Bedok Bedok. 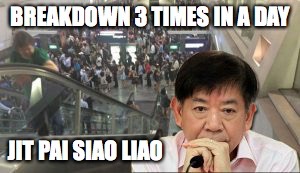 Used when: MRT breakdown, MRT breakdown and MRT breakdown.
Origin: Contrary to popular belief, this picture has nothing to do with the state of our public transport. Taken in 2013, when Minister Khaw Boon Wan pondered about inequity in the Executive Condominium scheme. 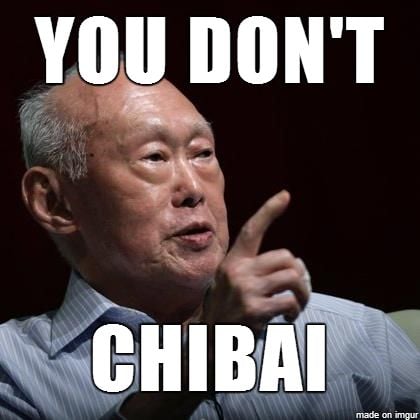 Used when: Your friend humiliates you for penny pinching and they do the same.
Origin: An interview with CCTV’s Yang Rui in 2011, which covered our founding father Mr Lee Kwan Yew talking about Singapore-China relations and our Western allies. 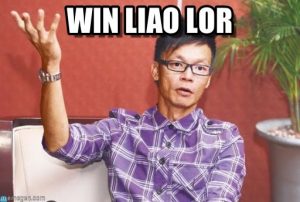 Used when: Someone spoil market, flooding becomes ponding, and when SMRT reports that the Joo Koon train collision simply ‘came into contact‘.
Origin: We’ve yet to uncover the mystery behind this popular meme. If you meme-kings know where this picture originated from, do let us know in the comments. 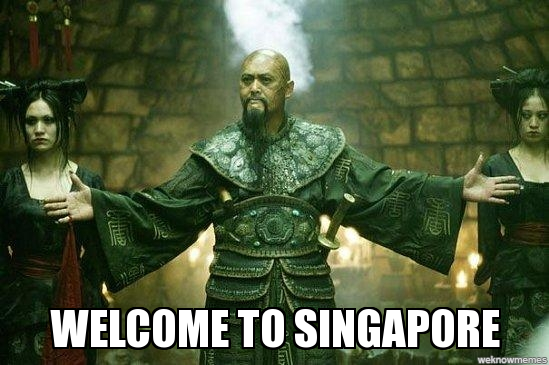 Used when: Anything remotely interesting happens in Singapore, like when it floods in Bedok or if the dreaded haze is back.
Origin: We were overjoyed when we heard that movie franchise Pirates of the Caribbean, cast global superstar Chow Yun Fatt to reign as pirate supreme in Singapore. Though we weren’t sure why locals featured in the movie were wearing Vietnamese hats, this iconic movie moment soon became a classic meme.

National Day Parade 2017’s latest meme-worthy celebrity. Though this cheeky young man was eventually scolded for his actions, we give him mad props for being himself. You do you kid, you do you.

Every meme is a good meme

We’ve uncovered the backstories behind these 13 iconic photos which have each launched a thousand memes.

Since you’re slightly wiser and five minutes older, spread the good word on how these Singaporean memes came to be, with your friends.

After all, money doesn’t make the world go round anymore. Memes do.

If y’all memers-in-training have more memes to add to this list, let us know in the comments.

Featured image from Imgur and Memegen.