Must Share News – Independent News For Singaporeans
Home Current Affairs Politics How Is A Minister’s Salary And Bonus Calculated? We Break It Down... 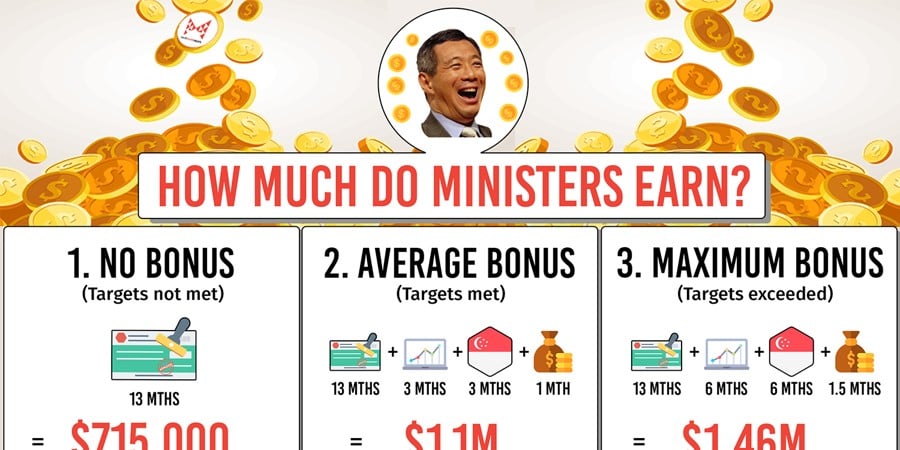 A Minister Earns An Average Salary Of $55,000 A Month, Excluding The Yearly Bonus

In terms of moolah (money) earned among world leaders, Singapore’s ministers outdraw many other world leaders, according to a white paper released by the Public Servant Division in 2012.

This 50-page document revealed that our typical ministers are capable of earning up to an impressive $1.46 million in annual income.

To help you digest what makes up this large sum, we have created an infographic summarising the salaries of our ministers.

Here’s a separate copy in case you are unable to view the one above: 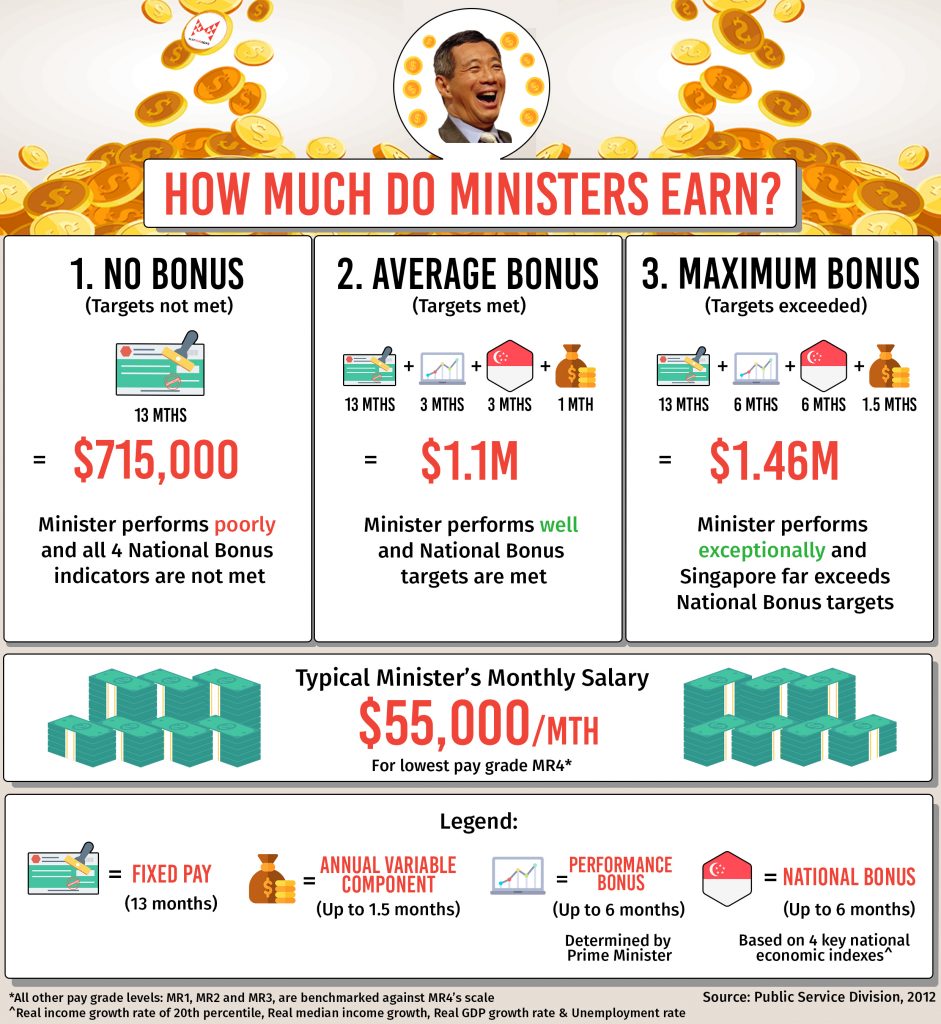 $55k a month? Forget being lawyers or doctors, if you’re looking for a high paying jobs, you should definitely consider becoming a minister.

Other than the fixed 13-month salary that ministers receive, they also have a chance of earning additional income from 3 separate areas — according to this white paper.

These areas are the Annual Variable Component, Performance Bonus and National Bonus.

Let’s take a look at each of them in detail.

The Annual Variable Component (AVC) is an additional payment ranging between 0-1.5 months that is made in the middle and end of the year.

This additional bonus is commonly given out to all civil servants, including ministers.

As part of the AVC, a minister could potentially earn an extra $82,500.

Just like how our performance bonus is determined by our boss, the prime minister decides how many additional months of salary – up to a maximum of 6 –  a minister receives.

This is dependent on how well the minister has done for the year.

Ministers are assessed on their immediate portfolio, as well as their contributions to the government as a whole.

At the very most, a minister could receive up to $330,000 in performance bonus.

Finally, the last kind of bonus a minister may receive from is called the National Bonus.

This bonus is dependent on whether the 4 key national economic indicator targets are met or exceeded.

National Bonus is a collective bonus that all members of political appointment will receive the same amount, regardless of their roles in national development.

Similar to the performance bonus, ministers can potentially earn another $330,000, provided the nation does exceptionally well in these economic indicators.

Perhaps, a more mind-blowing fact is that, when you add the maximum amount a minister can earn altogether, that sum equals to double of his initial fixed pay.

What an incentive to strive for better growth for the country. Though, $715,000 per year in fixed pay alone does not seem too bad either.

Do note that the infographic and statistics mentioned here, are based on the pay grade of MR4-ranked ministers.

Ministers’ pay grades are ranked from MR4 being the lowest, to MR1 as the highest rank.

As such, MR4 is the benchmark of what other higher ranks are based upon.

The reason behind the high pay value

While it may seem that our leaders’ salaries are excessive, there may be a reason why they are so.

Of course like any other job, the salary compensates for the responsibility that the job entails.

Salary is also about attracting talent, and in order for Singapore to have the best leaders, that salary needs to be high.

If this salary formula can draw out higher quality men into politics…I say, let us have them.

Given that leading and building a country is no easy feat, we hope our ministers’ salaries are a good reflection of the quality of their leadership.