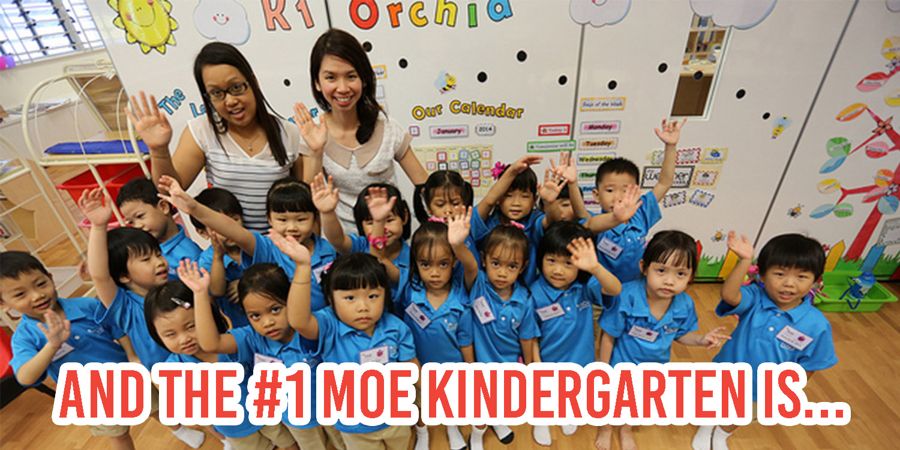 MK@Springdale Is Set To Become The Most Popular MOE Kindergarten

Most parents are probably wondering which MOE Kindergartens are worth enrolling in, since higher priority for entry will be given to their affiliated primary schools.

Which is why we’ve done the work for you, and ranked these 17 MOE Kindergartens based on the popularity of their co-located primary schools.

Generally speaking, schools with a higher risk of oversubscription mean that they are more popular with parents.

This will probably help you decide if it’s worth enrolling your child in the MOE Kindergartens near you.

How the ranking works

The available school vacancies from Phase 2B onwards are released by MOE every year. Parents will then apply to ballot for a place if the slots are oversubscribed.

We’ve based our ranking on Kiasuparent’s calculation of the oversubscription risk of primary schools from the registration history of these schools for the past 11 years (2006-2016).

MOE’s official release of the total number of available slots from Phase 2B onwards has also been included. This is a useful figure to consider, especially for students who wish to apply based on proximity to the school and/or parent volunteer work.

If you’re aiming for entry to a high-risk primary school, it’s probably better to try to enroll your child in the respective co-located MOE Kindergarten (MK).

If the child’s primary school of choice is a low-risk school, you can still opt for a private kindergarten instead.

Do remember that applying for a more popular school means that there’s a lower chance of enrollment due to oversubscription. In this case, placement will be decided via a balloting process for the available slots.

But if you’re just looking for a MOE kindergarten near your home, this list will be far more helpful.

Just like primary schools, admissions to MOE Kindergartens are also based on a priority order of citizenship, parents’ income brackets, proximity to school and lastly, children of permanent residents.

If oversubscribed, available slots will then be subject to a balloting process.

Here are the figures from 2018’s MOE Kindergarten 1 intake.

You can find out how to apply for your preferred MOE Kindergarten here.

Disclaimer: These rankings may be subject to change based on demand changes due to MOE’s new policy.