Content curators Kaki News Network (KNN) were embroiled in a controversy over Valentine’s Day when they downloaded and posted a video by Ministry of Funny (MOF) on their Facebook page without giving credits or linking to the original video. This sparked an angry response from MOF, calling for a stop to Facebook Freebooting.

The post, dated 12 February, initially made no mention of Ministry of Funny.

On 14 February, MOF made a post on their Facebook page slamming KNN for uploading the video with no mentions of the source and accused them of stealing and getting all the credit from a video they did not make — a practice they described as Freebooting, which means to take online media and re-host it on your website. 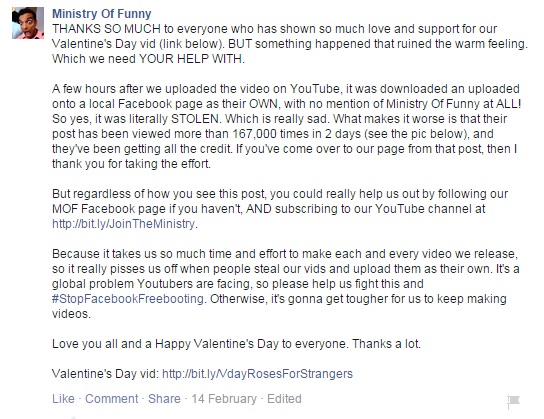 KNN commented on the post with a single picture of MOF’s Facebook page likes, showing a massive increase during the period when KNN had posted the video. 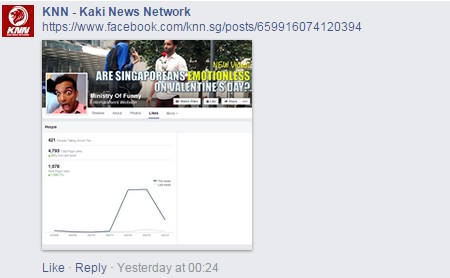 Unfortunately, MOF did not take their reply too kindly and launched into a tirade over KNN “implying” that they had done MOF a favour. 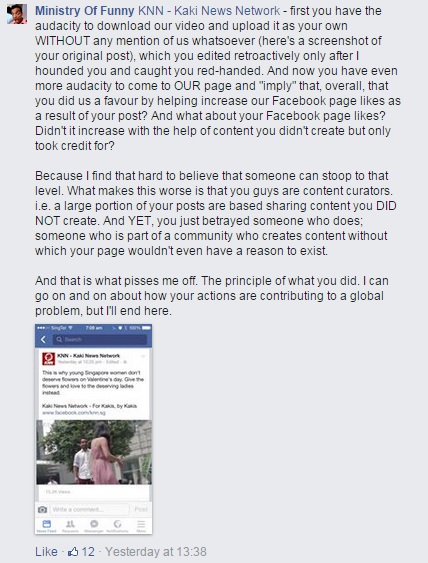 Two hours later, KNN posted a public response, claiming that they had already tried to make amends by editing the video’s post to include credits, but was only met with angst and offense in return. They went on to state that they will delete the uploaded video “after the hype dies off”, for reasons as yet unknown.

Apparently KNN still thinks they’re doing MOF a service, and a second reply later showed that KNN was not very happy with how things had gone down, due to MOF’s comments. 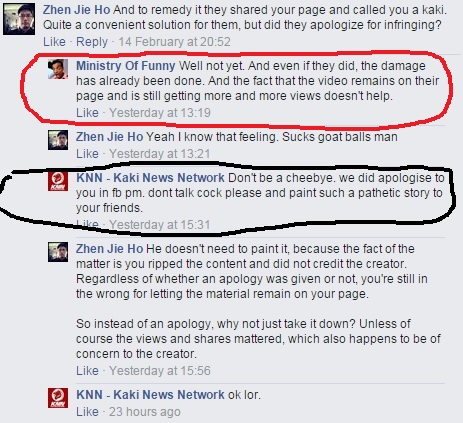 KNN also subsequently removed any mention of MOF being their “kakis” on their page after the incident. Aww. 🙁 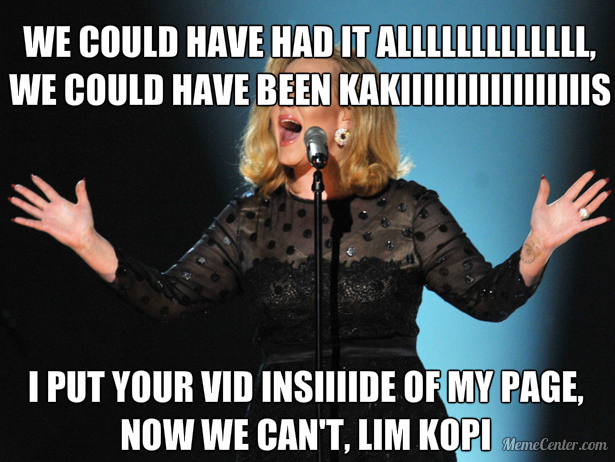 So why is Haresh Tilani (co-founder of MOF) so angry at KNN? Surely the matter is not about not giving credits, because KNN subsequently did so after hearing of MOF’s post, but Mr. Tilani remained offended.

In refusing to remove the video, KNN has already profited without spending a single cent — additional likes and shares (attributed to KNN) and kudos for doing the video in comments.

None of the benefits went to MOF because the video is hosted on KNN’s Facebook page, and that is the key problem.

Here’s the lowdown on freebooting:

No website should be downloading videos from other sources and hosting them on their own domain or page, because doing so takes views away from the actual video.

If there’s a silver lining to all of this, it is that KNN eventually gave credits to MOF and many viewers came to MOF’s Facebook page from there as a result.

Support content providers, and that includes us. You’re not obligated to, but feel free to give nice content (hint: our articles!) a like or share if you find them interesting. However, if you’re going to share an article on your own page, do give credits and link your viewers back to the originating Facebook page, because that would help them (and us) a lot.