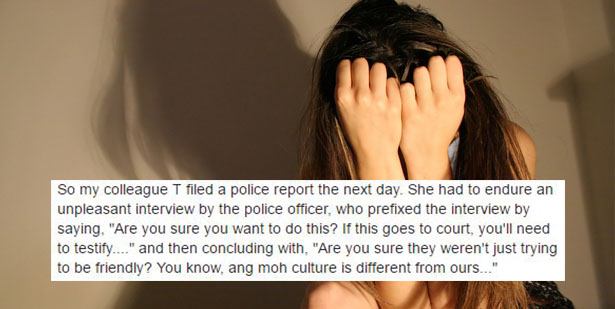 It’s not the first time a woman was molested by some boor – what is arguably more infuriating is not the crime itself but how it was handled by people who should really know better.

It’s bad enough to be molested, but to add insult to injury, the victim faced difficulty in reporting it to the police, who seemed unsympathetic and trivialised the assault.

This sordid tale was told by a colleague of the victim over Facebook:

According to Facebook user Amanda Lai, her two colleagues, T and R, went to the washroom during their office Chinese New Year dinner, held at Mouth Restaurant on Cross Street.

On their way back, two men who said they were from Portugal blocked their way before proceeding to harass T. One of them told her to take her shirt off and show him her boobs. T repeatedly said “NO”.

Well, instead of backing off one of them picked T up off the floor and molested her.

What had transpired is a clear case of molestation and sexual assault. Here’s the definition, for those who may not be aware of it.

The two women managed to escape and rushed back to the restaurant. When their colleagues confronted the 2 men, a scuffle ensued. The foreigners’ own colleagues defended them, saying that they thought the foreigners were just friends wth the two women.

Right. Friends pick up friends and molest them. If that’s how your friends behave, I wonder how your enemies behave.

As Amanda Lai put it:

Sure, when you see a woman struggling when being manhandled by a guy, you automatically think that they are friends, and that this is normal behaviour among friends.

The molester’s colleagues said his name was “Bruno” and he was from Portugal, but refused to say anything else, including what company they were from.

They then told him to make a quick escape from the scene. What great team spirit!

Strangely enough, the restaurant staff were also unhelpful. When asked for the name of Bruno’s company, they said that they would reveal it only to the police.

We don’t know if this is common practice among restaurants — why the secrecy? After all, if a case of molest was not alleged, we’re sure the restaurant wouldn’t have minded revealing the name of the company that booked a dinner with them.

After all, the victim’s company were also dining at the restaurant, and their staff was a victim of the molest. Is one company more deserving of protection than the other?

The most shocking part of the story had yet to come though.

The woman lodged a police report, but the police officer who interviewed her said things that were totally out of line.

According to Amanda Lai, the officer said:

Are you sure you want to do this? If this goes to court, you’ll need to testify….

Would the officer have asked the same question to a man?

The officer also concluded with the lovely statement:

Are you sure they weren’t just trying to be friendly? You know, ang moh culture is different from ours…

Wait a minute, are the police supposed to protect the victim or the culprit here?

We know that at this point, the police have heard just one side of the story — but if a woman says she has been molested, I don’t think the correct thing to do is immediately doubt what she’s saying is true, right in front of her!

We can’t believe this has to be said in this day and age, but if a woman says she has been molested, that’s exactly what she’s saying. It’s up to the court to decide whether she’s telling the truth, not the person recording her statement.

Those who commented on Amanda Lai’s post had lots to say.

And some said they have received a similar response from the police:

This is a clear example of a vile environment being created for women in which their abuse is not taken seriously, and they are made a victim twice over. They did not regard the case with the seriousness and respect it required. Trivialising of sexual abuse, especially, is just unwarranted, and smacks of sexism.

How can women feel safe if this is how the authorities treat sexual assault victims?

We can’t believe the police can find in them, as members of a justice system, to encourage the victim of a crime to just let the case go. Would the police officer have said the same thing to a victim of a physical assualt? Or the relatives of someone who had been murdered? If not, why would the victim of a sexual assault have to be asked whether they are sure they want to make a report?

It’s also very worrying that despite the victim saying she was clearly molested, the police office chose to adopt a disbelieving stance, having the cheek to ask the victim if she’s sure he wasn’t just “trying to be friendly”.

It’s like the officer thought the whole thing was just was an accident or something, or the woman was just making a mountain out of the molehill.

Again, would they have done the same thing to a victim of another crime?

Please Look Into It

Luckily, this lady had not gone alone, or the consequences might have been unimaginable.

Hopefully, the relevant authorities will look into this matter and pursue justice for the lady and the rest of Singapore society.